Jojo Rabbit is a failed attempt to be edgy and socially conscious in the Trump era. D 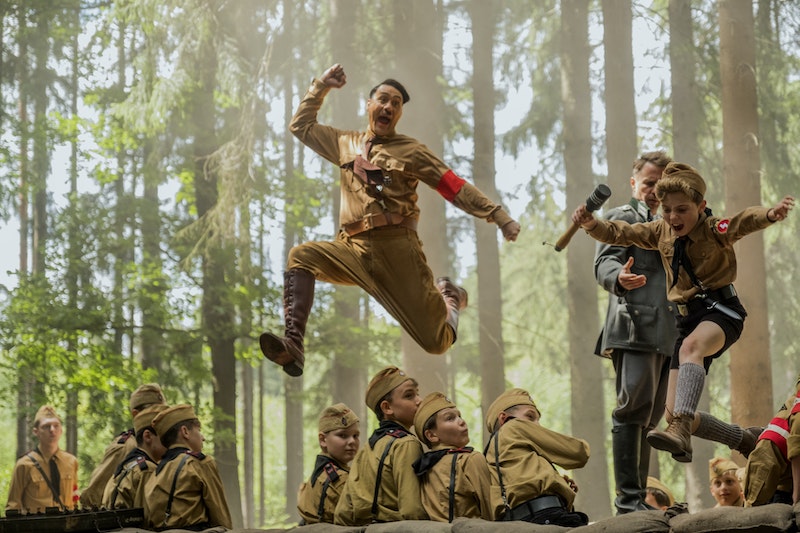 Taika Waititi, director of Thor: Ragnarok, is back two years later with a Nazi comedy. Not content with Mel Brooks’ and Charlie Chaplin’s definitive satiric takes on the Third Reich, Waititi wrote and directed Jojo Rabbit, a magical-realist pseudo-family-friendly black comedy about the Hitler Youth in the final days of the war. Roman Griffith Davis plays Joahnnes, or “Jojo,” an eager 10-year-old boy ready to become canon fodder and fully brainwashed by the most outlandish and absurd anti-Semitic propaganda: over and over, we hear about their “horns,” how they sleep upside down “in caves, like bats,” and their infinite filth. Scarlett Johansson plays Jojo’s mother Rosie, and Waititi himself plays Hitler, who only appears to Jojo like Marvin the Martian in private, imagined asides. Waititi’s portrayal of Hitler is as a flamboyant, fey, feckless, and indeed, faggy incompetent. Jojo Rabbit, a movie promoted as an “anti-hate satire,” is simply too stupid to take on the subject matter with any grace or insight.

Jarring tonal shifts are the biggest problem with Jojo Rabbit: most of it plays like a South Park episode, or the similarly offensive but not-that-rude Avenue Q, or even the sadistic torture porn parody Happy Tree Friends. The film moves from slapstick to solemn tableaux of public executions. It may sound daring, but we’re in the Trump era, and no one wants to be rude. Idiot conservatives and “classical liberals” obsessed with “SJWs running amok” on college campuses across America make the mistake that we’re not allowed to be rude. Jojo Rabbit tries to tread into the trappings of alt-right anarchy—approaching it with gloves and canes like an explosive specimen—and assumes that simply portraying Hitler and Nazis as silly, ineffectual, and effete is freaking edgy as hell.

No: a truly “anti-hate satire” would look like that abominable short film Skin that won an Oscar earlier this year, but played as farce. Neo-Nazi gets kidnapped by a black gang he insulted and is anesthetized for days while they tattoo his entire body black. He emerges as an unrecognizable, horrifying charcoal colored monster (think Zoolander down in the mines), gets dumped by the gang, makes it back to his house in a state of shock, and gets shot by his son as he tries to get in. Played as black comedy, it could work. As moralizing Oscar bait, despicable. Jojo Rabbit’s attempts to get serious backfire because its conception of World War II is all iconography, cartoon characters, and urban legends. Has Waititi read The Naked and the Dead? Night? Slaughterhouse-Five? Vonnegut is guaranteed, but assumptions make an ass out of you and Waititi.

I can’t quite call Jojo Rabbit despicable, just dumb. Muzzled by puritanical paranoia, the movie ends up more offensive than it would’ve been if it were made 10 (even five) years ago. There would’ve been more casual homophobia that’s slightly stymied here, since most of the film is spent with a crush between Jojo and Elsa (Thomasin McKenzie), a Jewish orphan Jojo’s mother took in and hid in the attic. After the SS stop by, Jojo and Elsa make it, but Jojo finds his mother hanging in the town square shortly thereafter. Waititi spends so much time on this ghastly sequence, and it’s the movie’s most unforgivable act of exploitation and emotional manipulation.

Who is this movie made by and who for? Nazism and its lockstep soldiers are evil morons; the little Nazi boy who fell in love with a Jewish girl is the brave one in our hero story here. It’s not a bad setup, with room to explore the reality of people being born into the torrent of history, and how easy it is for people to get caught up in unbelievable horror. Happy Tree Friends was good, and that’s what Jojo Rabbit should’ve aspired to. But Happy Tree Friends didn’t have any illusions about what it was: an adolescent perversion of children’s entertainment. There were no monologues or quotes from Rilke bookending episodes of Happy Tree Friends.