An alarming trend towards sluttin' it up, movie-style. 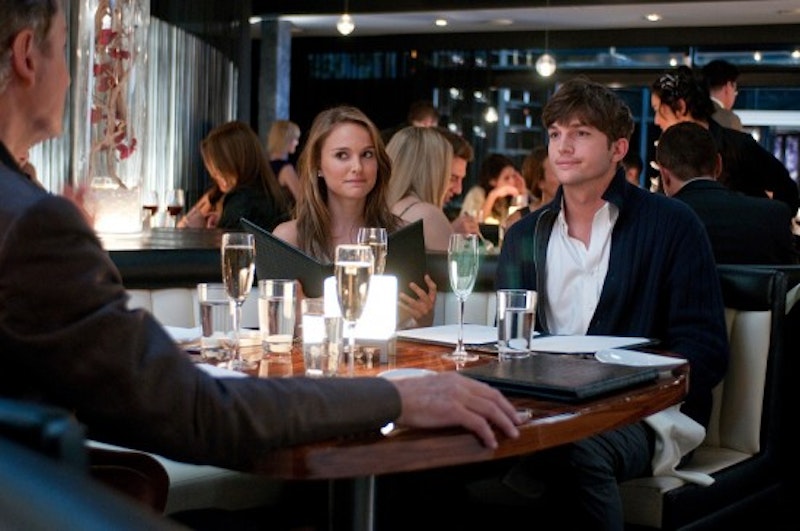 Plot: the protagonist (usually female) must make a very difficult decision between two love interests with radically different personalities. Generally, said protagonist isn’t committed to either of her potential mates, so her characteristic female inability to make a consistent decision is drawn out for about 90 minutes with minor repercussions, and eventually, a decision is made for her, saving her little woman brain from thinking too hard. Much of this is done under the feeble guise of “empowerment” or “controlling her sexuality in a world dominated by men,” but it never actually accomplishes that goal in any meaningful way.

It’s a trope that’s been used for as long as narratives have existed. It expresses the presumably universal wish that we’d all have a buffet of love and sex splayed out before us, and that our worst problems would be that attractive people wanted us too much. And generally, these films are regarded as chick flicks, so it’s surreal to see the masculine equivalent of these suddenly populate themselves across the big screen, and the plot is significantly different, and just as clichéd. Fear of commitment, unwillingness to take out the trash, love of sports and cars, a burning urge to go to Vegas, and other ideas that haven’t been funny since 1980s sitcoms, but somehow still perpetuate.

While the full plots of these movies might differ significantly from how their commercials portray them, their commercials are the element that’s designed to draw people in, a distillation of the film itself into 15 seconds. This is how they play out:

No Strings Attached: Hollywood dumbo Ashton Kutcher and Hollywood robot Natalie Portman agree to have emotionless sex, under one condition: the moment that either one of them feels a connection, they sever their libidinous contract. Which sounds like a string to me.

Hall Pass: Aging husband somehow wrangles a week of free sex from whoever he can score it from, with the approval of his wife.

The Dilemma: Friend witnesses friend’s wife in a sexy embrace with someone else. Hilarity ensues, because having your heart ripped out and wasting your life with a lying bitch who can’t keep it in her pants is comic gold. Okay, maybe that one hits a little too close to home.

Ultimately, there’s little doubt that these will resolve in a predictable way: true love is the answer, and maybe being with one person isn’t so bad, and feelings ooze out of everyone’s everythings as the music swells, and the credits roll, leaving the men who stumbled into these films a little stunned and disappointed that there weren’t more boobs. That’s not how these movies are being promoted, though: they’re promoted as extended paeans to some bizarre anti-marriage movement. Sex comedies aren’t new, but this movement against fidelity, or contractual infidelity, is new. The typical story about struggling to maintain a relationship and find true love is dead, and the fight for unfeeling, carnal action has filled with blood and sprung to life.

We exist in a cultural atmosphere where a disproportionate number of people worship celebrity as if it were a polytheistic cult, and we use these narratives that they create as justification for our own behaviors, which is an anthropological echo from ancient Greece. Zeus formed an inappropriate relationship with Ganymede, so it was okay for his worshippers to emulate that behavior and start touchin’ on the young’uns. One hopes modern man is more moderated and mediated by world-weariness and won’t seek to propagate the disease-spreading, heart-breaking behaviors of their cinematic gods.

But really, why do we have this sudden appearance of films they denounce fidelity and faithfulness as if they were unbearable restrictions to our explosive libidos? Are we really that unhappy that our astronomical divorce rates have finally leveled off? We’re a culture with disgusting cross-purposes: we fight against gay marriage, but we’ll promote infidelity within traditional marriage with our modern mythology. It’s not just that it’s promoted as an awesome way to spend a weekend, but it’s promoted as if it has no consequences.

Maybe I’m the last of the romantic, serial monogamists. I’m not anti-sex in any context, but I can’t stomach this willful production of anti-fidelity narratives as if they were hilarious romps through a world where no one gets hurt, and sex doesn’t make babies or rashes, and connecting to someone in a genuine, non-Facebook manner just isn’t hip. It removes us from being responsible for our actions, responsible to others, and conscious of the future, and we really don’t need any more of that.