The HBO documentary Reagan isn’t so different from the real Reagan. 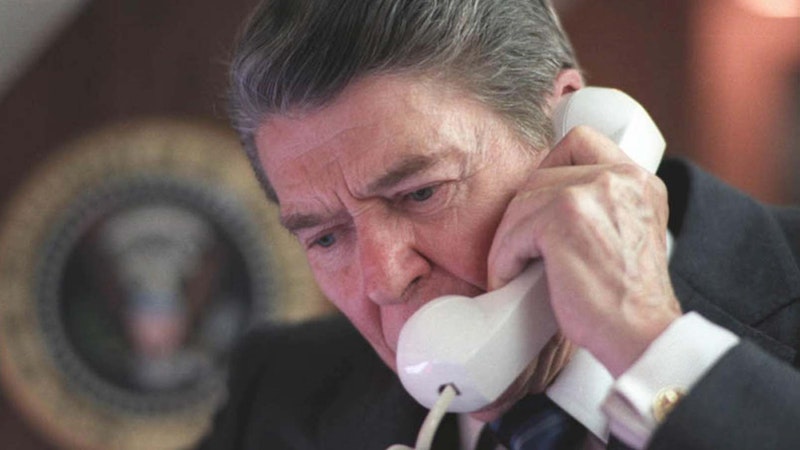 Eugene Jarecki’s Reagan isn’t intelligent, but it is winsome. It brings great skill to the modern day’s most entertaining art form, that of film juxtaposition. The little moments blossom as clips are matched to clips and images to words. Jarecki’s knack for the moment is as fine and on-target as Reagan’s own. A mujahadeen’s eyes suddenly shift, or dart, during an Oval Office meeting just as the voiceover gives us Reagan’s thoughts on how the world has changed and danger can come at the US from unexpected directions. Ron Jr. gives us the familiar observation that Reagan didn’t care about groups but would feel his heart bleed if you could “put a face to it”—that is, confront him with an individual. And we see Reagan staring off in the distance alongside a woman in a sari, and then suddenly he cranes his head over so he can look her in the face.

Notice that the word-image match-up here is a bit waggish. We don’t see Reagan staring into the eyes of some afflicted person. It’s like he’s copping a look; the impression is that he wanted to see for himself that bindis were for real. Subliminal jauntiness runs through Reagan’s editing. The subjects, especially Reagan, get ribbed a great deal, and the shots move along so fast that even the quietest moments feel a bit perky. You expect to hear rock music or a snotty voiceover. But the ribbing doesn’t add up to satire, the pace doesn’t add up to sensory overload. The film is too lively to be called sedate, but it is very proper and well-meaning, and there are worse things. But this film isn’t in-depth.

Read some interviews with Jarecki, and you get the impression of a man with hand welded to chin. But he doesn’t so much think as draw up lists of subjects that bear consideration. Reagan is one such list. The movie acts like it has come to some conclusions: very thoughtful ones, balanced and weighty. But the thinking behind them has been skimped.

Let us accept that there was no room for Bitburg, the arming of Saddam Hussein or the stationing of Marines in Lebanon so they could get blown up by a truck bomb. But what about Paul Volcker and the Federal Reserve? Leave them out and you can’t really talk about 1980s economic policy. Instead we’re given the very balanced, but unsubstantiated, pair of assertions that U.S. tax rates were too high and that Reagan shifted wealth from poor to rich. He brought recovery, the story goes (footage of gymnasts, a runway model), but at what cost (footage of food lines, the unemployed). Left unmentioned is the fact that the top U.S. tax rate had been as high or higher during the 50s and 60s boom as it was during Jimmy Carter’s stagflation crisis. Also left unmentioned are the excruciating interest rates with which Volcker’s Fed squeezed inflation out of the economy. Were these, and not the Reagan tax cuts, what allowed America to put in a few more years of healthy economic growth?  The question goes unasked, but it’s basic.

The film also comes up empty on nukes. Reagan’s policies brought us “very, very close to a nuclear war,” says a somber Mark Hertsgaard, one of the show’s talking heads. But when did that happen? At the time it seemed like Reagan knew enough to stay away from real conflict with the Russians. He didn’t mind snubbing them, calling them bad names, or pushing around their allies in the Third World. But when the Soviet Union shot down an unarmed South Korean passenger jet, Reagan issued a statement, slapped the Russians’ wrist, and left it at that. On the other hand, we’re given a voiceover clip of Reagan’s defense of the Strategic Defense Initiative: “What it takes to maintain deterrence has changed.” But was SDI necessary to deterrence? If so, why? It seemed like it would destroy deterrence, since the whole point of SDI was to keep one side’s missiles from reaching the other side. If a side can launch without getting hit in return, there’s no deterrence.

Reagan’s belief, unmentioned in this film, was that the United States would build SDI and then show the Soviet Union how to build it too; after that, he figured, the two countries would be able to get along. His critics thought he was kidding and that all he really wanted was to get Russia by the short and curlies. But apparently not. When he met with Gorbachev in 1985, Reagan terrified his own side by suddenly uncorking the idea that America and Russia could just get rid of their nuclear weapons. “A major achievement, a strong step,” says his secretary of state, George Shultz, reminiscing for the cameras. Shultz doesn’t mention that his boss’s little inspiration represented a near-death experience for US security policy. The Soviet Union had a large army stationed in Eastern Europe; the United States did not have the troops or political will to station an equally large army in Western Europe. Therefore, the United States had to keep the Russian army on its side of the line by aiming missiles at Russia. No missiles, nothing to keep back the Russians. Reagan was prone to forget details like that. So is Reagan.

Look at the forest, and Reagan is the man who won the Cold War. Look at the trees and it’s hard to believe he knew what he was doing. It’s not just that he financed terrorists, it’s that he thought the terrorists in question (the Contras) were a nice bunch of guys. It’s not just that he traded weapons for hostages, it’s that he thought he was doing something else altogether, some harmless activity that took the form of sending missiles to Iran. Jarecki hauls out a clip from the great Saturday Night Live sketch about Reagan the public boob versus Reagan the secret kingpin so that his talking heads can agree that Reagan was both. I’ll fine-tune their point for them and say that Reagan didn’t switch between boob and kingpin. He was a boob while being a kingpin.

There’s one thing Reagan kept clear in his head: He was willing to lie. Reagan goes over the transcript of the National Security Council meeting where Reagan told his vice president, CIA chief, secretary of defense, secretary of state, and chief of staff that they were going to get money to the Contras regardless of the law. George Shultz assured him, in so many words, that this was impeachable. Reagan, playfully, told the gang that if the secret came out “we’ll all be hanging by our thumbs in front of the White House until we find out who did it.”

Jarecki’s film does a good job of sketching in the damning material we now have on Iran-contra. Yet it closes out as an elegy, with a sad story about Reagan’s Alzheimer years and then “Seasons in the Sun” played over the credits. The song is so hokey that it seems like the film is being waggish, again; hard to say. Maybe it just doesn’t know what to make of what it has just shown us. Which is fair enough: Reagan didn’t know either.