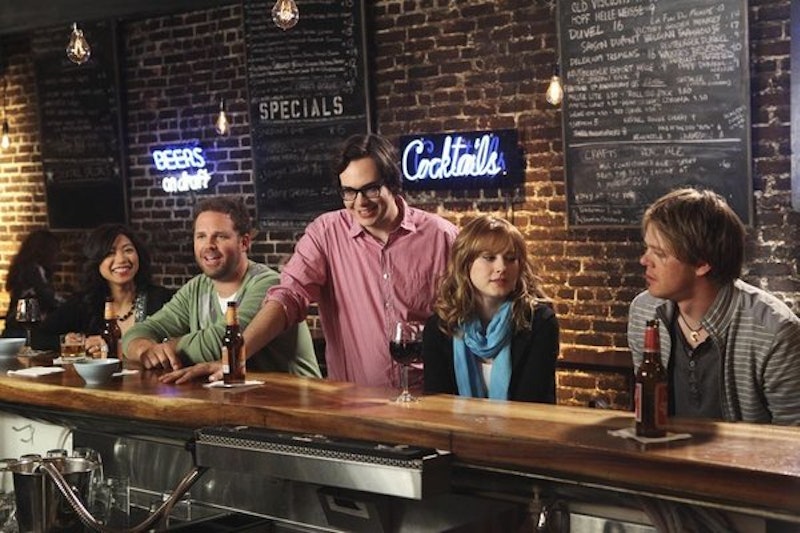 I have this theory that an NBC executive made a bet with his counterpart at Fox that his network could create a more obnoxious, clichéd comedy about the various stages of romantic relationships. The Fox guy was all, “Oh you are so on!” They shook hands, agreed that each cast had to be overwhelmingly white and got to work producing Perfect Couples and Traffic Light.

It’s hard to say which network won this battle of mediocrity. I’ve already offered my opinion of NBC’s Perfect Couples (which hasn’t improved much in the two episodes I’ve seen since the pilot) and I’ve added Fox’s new comedy Traffic Light to the ever-growing pile of crap I’ve watched this season for the sake of tv blogging.

Traffic Light is about three college buddies who are now in their 30s and each at a different stage in relationships. There’s Mike (David Denman, probably best known for his role as Roy on The Office), who is married and has a young son. Mike is the red light. There’s Adam (Nelson Franklin), who has just now moved in with his girlfriend. He’s the yellow light. And then there’s Ethan (Kris Marshall), who is British and happily single. He’s, well you get the point, but just in case this is a little too clever for you, they explicitly outline the traffic light symbolism in the last few minutes of the episode.

The pilot’s basic premise is that these three dude-bros spend a lot of time driving around, talk to each other on the phone way more often than any men I’ve ever known, and occasionally help each other lie to and manipulate the women in their lives so that the three of them can get together for a beer every now and again without having to get into a big fight about it, because, you know, women. It’s in this way that Traffic Light may be even more obnoxious than Perfect Couples. It relies so heavily on outdated gender stereotypes and lazy clichés, while trying to pass them off like honest and relatable depictions of what relationships are like nowadays.

Married Mike is by far the worst offender. When we first meet him, he’s parked a block away from his house after work, watching Iron Man and hiding from the responsibility of getting home to help his wife take care of their son. One of the running gags throughout the episode is that he won’t talk to his friends on the phone while his wife is in the car, going so far as to create a code where two coughs means Lisa (Liza Lapira) is present, don’t say anything incriminating. And when he forgets about the work function he promised to attend with her, instead of just saying that it slipped his mind and now he’s stuck helping out Adam with a last minute favor, he lies by claiming that he got called into work on a Saturday and makes her feel bad about being annoyed by spouting some bullshit line about how he’d much rather come and accompany her, who cares if leaving work means he might not make partner at the law firm. Things aren’t much better with Adam, who gets advice from Mike and Ethan that if he wants to have a night out with the guys, he needs to convince his girlfriend, Callie (Aya Cash) that although he obviously would love to spend all of his time alone in their new apartment, he feels obligated to get together with the fellas. This, of course backfires when he tells Callie that Ethan is really upset about his recent break-up and Callie decides to join them for a drink so that she can help cheer Ethan up.

What’s most obnoxious about this depiction of women as unreasonable, fun-killing shrews is that both Mike’s wife and Adam’s girlfriend seem pretty cool. They’re laid back and funny and never once act like the wet blankets the show makes them out to be.

If Traffic Light could actually figure out how to use the female characters in a way that’s not insultingly gendered—here’s a novel idea: let them be part of the friend group—it could have a chance of being a halfway decent show. There’s a lot of good chemistry in the cast, both within the romantic pairings and between the three friends, and it’s got a lot of likeable actors who have been funny and endearing in other projects. But it needs a pretty significant change in tone if it’s going to separate itself from the pack of boring, unfunny relationship comedies. If we’re going to spend this much time watching a bunch of guys drive around, at least put them on a road toward something funny.