Showtime's lead-in for the American version of Shameless satirizes the very act of remaking British shows. 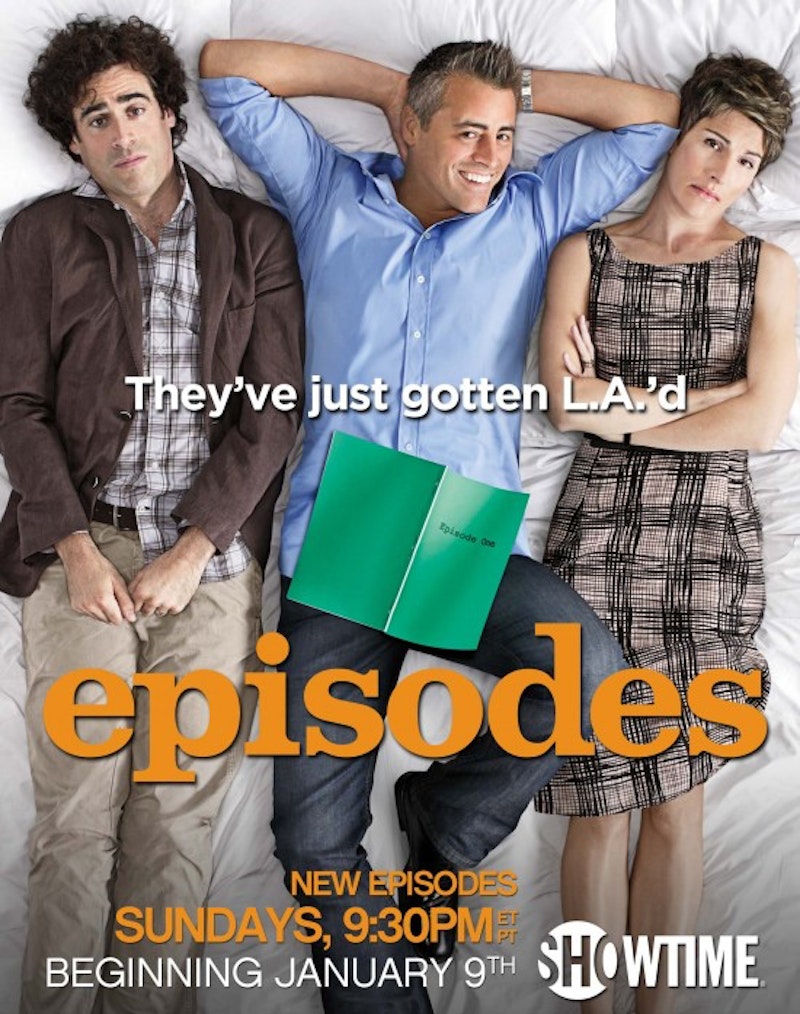 Showtime's new sitcom Episodes is ballsy. Not because it pokes fun at show business, or derives much of its humor from uncomfortable, politically incorrect social situations, or allows Matt LeBlanc to play a ridiculous, unflattering caricature of himself. Episodes is ballsy because of its scheduling; that is to say, it satirizes the way American TV often butchers British shows, and the series Showtime plays directly after it on Sunday nights is an adaptation of the Brit hit Shameless.

Episodes was produced jointly by Showtime and the BBC, and stars Stephen Mangan and Tamsin Greig, who were previously teamed in the Britcom Green Wing. It was also created by David Crane of Friends fame and Jeffrey Klarik of Mad About You fame, so the assembled talent have a good ear for both the ruthless, commercialized world of the U.S. television industry and its much smaller U.K. counterpart. And they probably didn't have look far for inspiration; though The Office still stands as a prominent example of an American network spinning an adaptation of a British broadcasting phenomenon into a successful stateside franchise, television history is littered with incompetent attempts at bringing a good show across the Atlantic without losing so much more than the accents.

Fawlty Towers, Absolutely Fabulous, Men Behaving Badly, Coupling, Red Dwarf and Life On Mars are just some British series that American networks attempted to remake without ever surviving more than one season, if they even got past the pilot stage. Sometimes the cultural references didn't translate well, or the humor was just too British to be entirely embraced by American audiences, but more often than not bad casting, bad writing, or a blatant disregard for preserving what was good about the shows to begin with was to blame. Episodes portrays a fictional show-within-a-show in which all of the above factor into the resulting fiasco.

Mansan and Greig play a husband-and-wife writing team with an award-winning BBC series who are invited out to L.A. by an American network executive to remake their show. Almost instantly, things go awry; it turns out the exec hasn't even seen the show, and piece by piece the show is made unrecognizable. The aging school headmaster is now played by LeBlanc, who becomes a hockey coach, and the title changes from Lyman's Boys to Pucks! Even the protagonist's unrequited love interest, a lesbian librarian, is turned into a straight, perky blonde with nearly pornographic short skirts.

Showtime would be tempting fate by making Episodes the lead-in to its most hyped new show of the year if Shameless was a victim of that kind of wrong-headed adaptation. Fortunately, Shameless is a pretty great show in its American incarnation, even a better one than the sometimes too dry and predictable Episodes. It may be guilty of too much fidelity to the source material, since the character names from the British Shameless are unchanged, resulting in the slight awkwardness of a lower class Chicago family who has names like Ian and Fiona.

That's not to say that this season has been without its share of Transatlantic TV fiascos, however. The past few months have seen the premieres of MTV's widely and justly reviled version of the debauched teen drama Skins, SyFy's uninspired adaptation of the quirky vampires-and-werewolves dramedy Being Human, and the History Channel's completely unnecessary attempt at remaking the hugely popular car-themed reality show Top Gear.

If Episodes just produces this first season, which airs its finale on February 20, or one or two more, in the BBC tradition of not driving a good thing into the ground, that'll be fine. But if they drag it out for several seasons in the American way we’re more accustomed to, they'll always have a rich well of real life examples of U.S. networks ruining British shows to draw from for storylines, because this pattern probably won't stop playing itself out anytime soon.