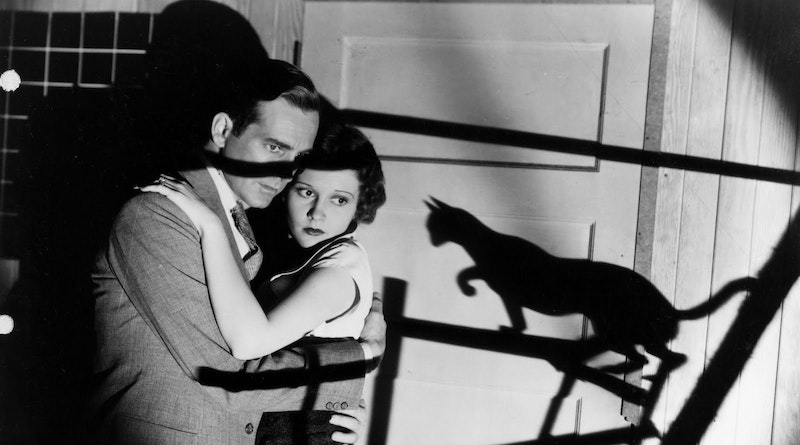 During the movie productions at the Universal Pictures, Béla Lugosi and Boris Karloff shared the silver screen many times. One of the films that stands out is Edgar G. Ulmer’s The Black Cat (1934), a pre-Code horror film. Although there’s a brief mention at the film’s opening credits of Edgar Allan Poe, the film has little to do with Poe’s 1843 eponymous short story.

Newlyweds Peter and Joan Alison are on their honeymoon in Hungary. By mistake, they end up sharing the train compartment with a Hungarian psychiatrist, Dr. Vitus Werdegast (Béla Lugosi). Understandably, the newlyweds are slightly annoyed but Werdegast’s polite and respectful demeanor quashes any uneasiness about the stranger.

The three strike up a conversation and Werdegast reveals he’s visiting his old friend, Hjalmar Poelzig (Boris Karloff), an Austrian architect. It’s clear that there is bad blood between Werdegast and Poelzig, despite the fact that Werdegast presents him as someone who can be trusted. It turns out that they knew each other during World War I. While Werdegast ended up in a Siberian prison camp, Poelzig appears to have used the war in order to advance his career, having no political or military loyalties. Poelzig is a man who only operates on the basis of self-interest.

As the couple in love and Werdegast get off the train, they take a bus to their respective destinations. A bus accident in which the driver dies, and which injures Joan, prevents the couple to go to their destination. It turns out that the closest place to take refuge is Poelzig’s grand house (built on the soil where many men died during the war), and Werdegast insists that Peter and Joan stay there.

Just as we see the grand entrance of Lugosi into the train compartment at the beginning of the film that reveals the actor’s intensity, so we witness Karloff’s emergence out of the shadows. Werdegast and Poelzig meet after so many years, but anything personal that they have to say to each other is postponed in order to tend to Joan’s injuries. (It’s easy to see how some of early James Bond films, especially Dr. No and Goldfinger, may have been inspired by the relationship between Werdegast and Poelzig, which is always teetering on the borderline between false friendship and animosity).

Everything about Poelzig’s house is cold and distant. Many architects tend are narcissistic in an execution of the design, and here too, we see visions of self-centered grandeur. Cold modernism with an added passageways and various secret entrances that only a self-absorbed maniac or Dracula would have. Poelzig’s “castle” isn’t a castle at all, but the house’s menacing modernism is an updated version of a typical castle in which a madman resides.

Poelzig is already eyeing Joan, especially in her vulnerable state, and we can only wonder about his intentions. They’re definitely not good. Although Werdegast is presented as the “good guy,” Lugosi’s menacing look even when helping Joan, creates an atmosphere of distrust. Poelzig is already seen as the “bad guy” in the film but that assumption is only as reliable as Werdegast’s narrative point of view. He’s the only source of knowledge of Poelzig’s character, but the film leaves us guessing almost until the end.

The black cat does appear in the film but perhaps only as an afterthought, or a representation of witchcraft and folkloric associations with Satan. The cat’s presence is the harbinger of what’s to come. Not only is Werdegast terrified of cats, the image of a black cat linked to the devil turns out to be somewhat true. Poelzig is operating a secret society that worships Satan, and he intends to offer Joan as a sacrifice.

But wait! There’s more! Poelzig proudly shows Werdegast a collection of dead women, prominently displayed in individual glass displays. As if in some suspended animation, the women are floating, wearing beautiful white gowns. Werdegast is disgusted but the pinnacle of this disgust comes when he realizes that one of the women in the glass case is his wife, Karen.

Although the film’s victims are Peter and Joan, the focus is on Werdegast and Poelzig. The star power of Karloff (who’s billed in the film only as Karloff) and Lugosi, brings out the film’s exotic character. In the case of Lugosi, who was actually Hungarian, there’s an air of authenticity, which doesn’t slip into a silly stereotype.

Ulmer’s direction balances the macabre with the psychological. There’s no bizarre gore (which we see in later horror films, and which has its own place and meaning), and what drives the film is the examination of consciousness and psyche. Peter and Joan are mere vehicles into the minds and relationship between Werdegast and Poelzig.

Just as in many of the horror pre-Code films, there’s also humor, which was one of this genre’s traits. On one occasion, Peter requests the police to help him and Joan to get into a different town since Poelzig’s presence is clearly evil. The two policemen regret that they’re unable to help them but are very friendly and take interest in the couple’s tourist aspirations. Playing off of the exotic theme in the film, they argue about which town in Hungary is better to visit. There’s a sense of humorous locality to which Peter and Joan react as any Americans would—with intrigue but also with that usual Western attitude toward the otherness. They find it cute and harmless.

The terrifying aspect of The Black Cat film is the perfect marriage of the mood (especially music) and an exploration of the human consciousness. Man is capable of dark things, and the film intelligently uses the aesthetic expressions found both in design/cinematography and Lugosi’s and Karloff’s essence. While taking the themes from many gothic novels, the real terror lies beneath the house, in the handcrafted glass catacombs, Satan’s altar, and the truth of what kind of evil is man capable of.

As the dark and vengeful side of Werdegast is revealed at the end, he utters his final words: “It has been a good game.” Yet it’s the humor that frames the entire picture. Thankfully, Peter and Joan are on a train away from the house, and Peter reads a not-so-flattering review of his mystery novel. Apparently, he has too much imagination, and such strange things never happen in real life.