The triumph and despair of Nicholas Ray's The Lusty Men (1955). 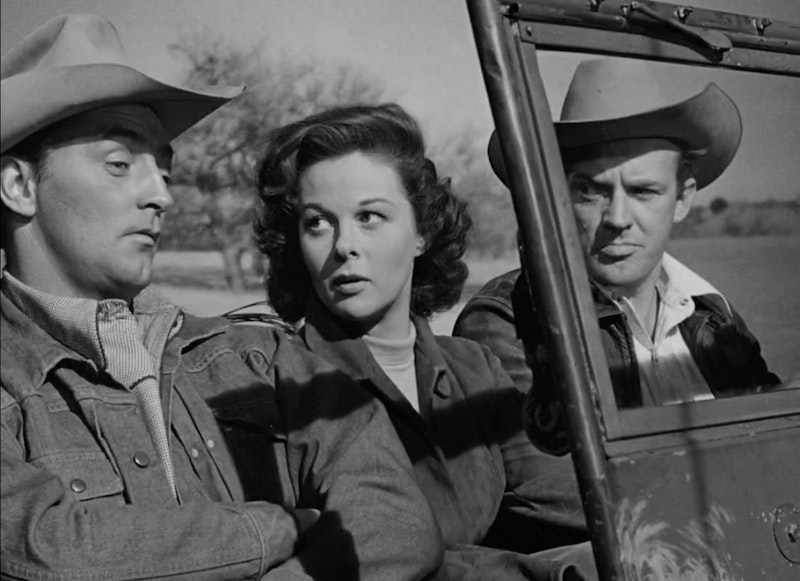 Nicholas Ray is known for going against the Hollywood grain. Although he was steeped in the Hollywood environment, and something like an “independent director” didn’t exist as a reality or a phrase, Ray managed to create films that stood out. His 1955 film, The Lusty Men, stands out as a singular and beautiful reflection on the life of professional rodeo competitors.

Based loosely on an article by Claude Stanush in Life magazine that described the real life of modern-day rodeo, The Lusty Men is a blend of art and documentary, yet the film also transcended both the form and genre. It tells the story of a professional rodeo competitor, Jeff McCloud (Robert Mitchum), who at the beginning of the film is injured by riding a famously dangerous Brahma bull. After 18 years of professional rodeo, Jeff decides to quit, and return to the old family home.

After all the spectators have left, Jeff walks through the empty rodeo field. Random garbage and newspapers are flapping in the wind and moving across the silent field. Just like the theater, once the stage is empty, lifelessness ensues until it’s awakened again. Jeff hobbles because of his injury, and walks across the field that he’s seemingly leaving forever. Mitchum’s gait reveals a man injured (perhaps more in pride than physically), yet his mere presence brings intensity to this wounded rodeo warrior.

There’s not much left of the family home. The family’s gone and another man occupies it. While Jeff reminisces about his childhood, a couple arrive at the house. They’re Wes and Louise Merritt (Arthur Kennedy and Susan Hayward, respectively), a husband and wife who have their sights on the house. Wes is a cowhand, who apparently only dabbles in rodeo, but it turns out that it’s more than just a passing interest in order to earn a few extra dollars.

Wes recognizes Jeff since he has a reputation as a great rodeo competitor. His wins are legendary. Louise is suspicious of Jeff (yet also attracted to him), because she wants to keep Wes out of the rodeo business. She’s sensible, talks back, and is more logical and less emotional than Wes, who’s driven purely by the passion for rodeo. Jeff decides to accept Wes’ offer to show him the ropes of rodeo, and enter into the rodeo circuit, but on one condition. Whatever Wes earns, Jeff gets the half.

At first, Louise is against the enterprise. But realizing that Wes is going to leave her and pursue this ridiculous dream, she decides she must protect him from Jeff. But as they begin their life on the rodeo circuit, it quickly becomes clear that there’s no romance or grandeur about this competition or lifestyle.

Everyone lives in trailers, the wives of the cowboys are miserable, and most of the cowboys waste their earnings on cheap women, gambling, and booze. Still, Louise finds solidarity with other women, who tell her that things will get easier. For some, it’s a privilege to be part of their husbands’ accomplishments. But despite the wins and achievements, the money goes away as quickly as it appears, like the 10 seconds on the Brahma bull, or the 20 seconds it takes to rope a calf.

Things deteriorate when Wes abandons his and Louise’s dream of buying the old McCloud farmhouse, and focuses entirely on the rodeo circuit. He’s inebriated with both alcohol and the rodeo buzz. No matter how hard Louise pleads with him, Wes isn’t interested in quitting. But as their time on the rodeo circuit passes, Louise becomes an object of love and attention from Jeff. Driven by his passion for Louise, in order to prove how manly he really is, Jeff enters the competition once again, in what’s clearly a direct challenge to Wes. But even in this moment, as Jeff fights for Louise, the two men acknowledge their respective choices with a clear-eyed respect for one another that’s unique only to men.

To say that things take a tragic turn after Jeff enters the rodeo arena once again would be wrong because The Lusty Men is a tragedy in its entirety. At times, reminiscent of John Ford’s The Grapes of Wrath, Ray’s rendition of the rodeo life is quintessentially American. Just as Elia Kazan shows the beauty and ugliness, as well as the possibilities and impossibilities of the American Dream in A Face in the Crowd (1957), Ray too slowly reveals the reality underneath the romanticization of rodeo life. Somehow, the characters get in their own way of achieving the American Dream, but what is that really in the context of The Lusty Men?

Jeff has spent most of his life addicted to the buzz that, according to him, a woman can never understand. He won and lost a lot. He wasn’t sensible about money, and found himself seeking a job as a cowhand—hardly a job worthy of the rodeo champion, admired and loved by many but to be a rodeo champion, one must accept the successes and obstacles. Yet, he and others have lived for the few seconds of ecstasy and mysticism that surrounds the rodeo.

Wes descended into despair, not knowing what’s up and what’s down, slowly losing the sight of his wife. But he eventually exits the arena, both literally and symbolically. As one great champion dies, we hear an announcement about another promising newcomer to the rodeo. The glory of a cowboy is short, yet for these men, it’s worth every moment. Rodeo isn’t merely a way of life, it’s an ecstatic, spiritual experience, and Ray’s mystical vision illuminates the interior lives of cowboys and their wives. But isn’t the glory of any excellent endeavor short-lived?

“Guys like me last forever,” Jeff says to Louise before he takes his final breath. Mitchum’s independent and in control even while dying, but this masculinity that requires constant feeling of conquering cannot always renew itself. What’s a beaten man? A wounded wolf in the mountains, alone and unwanted? A respected man who quit while he could? But isn’t the legend of the cowboy only meaningful because he remains frozen in time? Isn’t there an alternate life for someone life Jeff, and his actions reveal the authenticity and destiny of his existence? In death comes eternity.