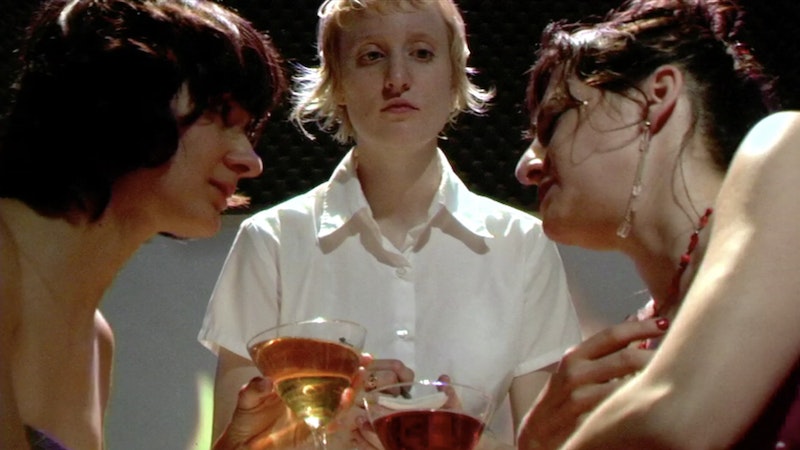 Working nights at a basement restaurant bar, stripped free of roots, the people you’ve known all your life, too tired to go out and experience the culture offered by NYC, you wind up sleeping on the train home, drained in daylight of any drive or the direction that brought you here, unable to look further for an artistic subject than your own foot, you’re interrupted by your bro roommate flopping onto the couch to taunt you about thousands wasted in art school. Your only romantic prospect is an angelically cute videographer who negged you (along with, unbeknownst to you, 50 other girls) on a shitty video dating site where women make personal testimonials like I’m really smart. I have a great tight pussy. I can make lasagna.

Not interested in the endless loop of awkward online dating conversations, you propose this guy, Arin, come visit you at work. Instead, he disguises himself, brings a video camera, falls asleep in the diner nearby and follows you on the way home, filming and taking snaps. Later, he emails them to you. Subject line: stalking susan. Since nothing can live up to getting stalked, you propose an anti-date, “something challenging.” He asks, “What if we made a rule to not speak?”

The semi-fictionalized Four Eyed Monsters, released in 2005, debuted at Slamdance, made the festival circuit, screened in theaters around the country at events organized by fans and had a successful 13-episode “video podcast” series. After a lot of distribution confusion, plus tens of thousands of dollars of debt, there was a delayed DVD release and its shorts played on IFC, but nothing that matched the scale of the filmmakers’ expectations—it fell into the streaming gap. Spout, one platform actor-director-writers Susan Buice and Arin Crumley were using to promote and make money from the film way back when, now has little Internet presence and a domain name for sale. It was finally posted years later to YouTube, a site creators like Brian Jordan Alvarez are using to its fuller potential as a streaming platform for low-budget movies that can net the artist some ad dollars.

Four-eyed monsters are couples—four eyes, two mouths, countless creeping limbs, and something everybody wants to be part of.

To that end, we’re treated repeatedly to Arin’s laughably juvenile sexual longings: imitation Carrie Brownstein seducing him in a laundromat, flat-chested hipster girls running across the street in slow-mo, Susan in Hot Topic clothes dancing in an empty subway car, licking the dirty pole—coupled with his stubbornly rigid ways of relating to these women sexually. Eventually, these no-talking dates lead Susan to a paid artist retreat out of state and Arin to a montage of filth-themed loathing ending in a free city clinic where an animated interlude shows him desperate, sobbing, begging for answers about a bump that “looks herpetic” under the microscope from a doctor preoccupied with giving an entertaining rant against Americans’ obsession with what he calls a skin disease.

With the opportunity to hang out among artists, paid, in a beautiful snowy landscape and the pressure of banking your entire life’s purpose on what you make in a few months’ time, Susan makes a lot of plans for her art, then shirks off to have fun. Despite making and mailing tapes back and forth to the city, taking videos and especially creating an overdubbed video mocking her job’s customers that could be a minor hit on social media, she considers none of this to be “real” art.

I came here to find out if I was an artist. I didn’t create from my core. I didn’t stay in my truth. I didn’t make mixed-media drawings. I didn’t paint. I didn’t draw. Given free time to do with which whatever I want, I’ve done nothing. I am not an artist. I have no future.

An isolation-induced almost cult-like divorce of herself from self-image and former purpose leads to the only thing left—clinging to a barely-there relationship that the two of you sweatily mold into an artistic partnership.

Filmed on a Panasonic AG-DVX100, Four Eyed Monsters looks good. Images aren’t muddy unless intentionally so; animated portions and static sketches are sprinkled throughout the rushing time-lapsed quilt of bright reds and intense digital noise. Leaning into the early-2000s Internet aesthetic, imagined websites like MySexResume.com (“a place for sex”) fill the screen with real-life exes giving reviews of the last time you had sex, a prediction of social media forcing the intrusion of our pasts into our present. Pixels are sometimes big enough to see different colors in, little stained glass pieces making up a moving face. The camera’s constantly moving, roaming under overlapping voices, the surprisingly interesting soundtrack, or the scratch of permanent marker on paper.

For fans of: Millennium Mambo; Frank Film; All Light, Everywhere; Margaret; and Happy Together.