Posterized: The Tragedy of Macbeth, Directed by Joel Coen

Little quasi-people in a huge inert space like nothing on planet earth. 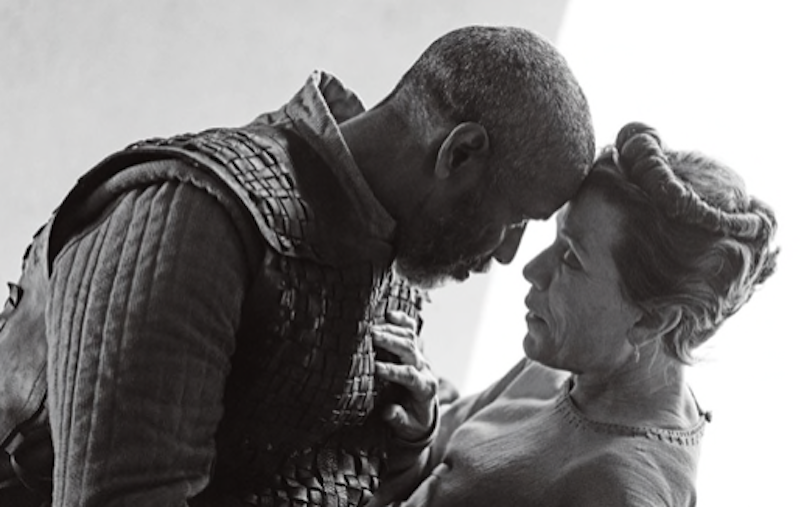 "Written by Joel Coen" claim the credits for The Tragedy of Macbeth. And the writing is indeed excellent. "Out, out, brief candle!" writes Coen in his inimitable fashion. "Life's but a walking shadow, a poor player, that struts and frets his hour upon the stage, and then is heard no more. It is a tale told by an idiot, full of sound and fury, signifying nothing."

As that makes evident, and unusually among bad movies, the problem with this one isn’t the writing. The problems concern the sets, cinematography, casting, and direction, which if anything signify too much.

The film's look has drawn great praise, but I have reservations. Except for a few cliché shots of characters on cliffs looking out over the ocean and contemplating this and that, which could’ve been cut and pasted from Poldark, it appears it was filmed on a soundstage made of poured concrete, as interpreted under CGI. Indoors or out, everything is full of smoke, suggesting that the cast is surrounded by an infinite and obscure void rather than say, Scotland. This may sound intriguing or profound, but in effect it's heavy-handed: little quasi-people in a huge inert space like nothing on planet earth.

The look of the film suggests an attempt at an avant-garde staging of a Beckett play on Broadway, circa 1954. Establishment surrealism, we might say. It's an attempt to return to "high modernism," but with a script written during the reign of King James. The look echoes the paintings of de Chirico, and probably a bunch of famous German movies that I don’t recall. It’s self-consciously "art." The black and white cinematography, and the sets, seem intended to frame the script neutrally, to let the words echo down the empty brutalist halls. Instead, the setting is continuously disconcerting. And it suggests that it takes place in some parallel dimension, to creatures quite unlike ourselves.

The blank and brutalist architecture and the black and white are evidently supposed to create an eerie effect, and Coen's interpretations relentlessly emphasize the supernatural elements of the play. The three witches are a single contortionist, apparently alien, with two reflections, talking in a weird voice. Coen gets lots of mileage from crows and crowns tumbling through the smoke; those are some of his few direct acknowledgments that he's directing a film rather than a play. But the virtuoso shots of objects floating are more like tributes to Natural Born Killers or American Beauty than Shakespeare.

The character of Lady Macbeth is subtle, seductive, diabolical, and as she goes on she teeters into madness. Frances McDormand seems to me kind of blunt and Midwestern and notably sane (perhaps I remember Fargo too hard). Even though she's a fine actress in a variety of roles and reads the lines okay and doesn't try an accent or anything, she doesn’t believably drive the action.

Masculinity, femininity, and sexual entanglement are dominant themes of Shakespeare's play, and Lady Macbeth, for example, delivers the remarkable line "Come, you spirits that tend on mortal thoughts, unsex me here, and fill me from the crown to the toe topful of direst cruelty!" Then she keeps telling Macbeth that if he were real man, he'd get busy on the regicide. In the fine 2015 version directed by Justin Kurzel (and, disturbingly, produced by the Weinstein brothers) Marion Cotillard conveys the power and the twistedness of Lady Macbeth superlatively, which makes the relationship, and the play, successful. As she works to make Macbeth (Michael Fassbender) screw his resolve to the sticking place, she also gets him to screw her. But evidently bent, with a sexual power that distorts everything around her: that's just not McDormand's métier, and I think it's too late to get that going now.

As a sixtysomething I hate to say this, but Denzel Washington (who’s good line by line) and McDormand are too old to play these roles. They're in their 60s, while the characters are perhaps in their 30s. In the play, they've recently lost a small child and evidently concluded that they can't have any more, which partly drives the plot. Macbeth has just made a name for himself in battle, and as he does so, his overweening ambition awakes, or his existing ambition metastasizes. He and his wife are sexually intense in a way that’s much more common at age 30 than age 70.

To make this tragedy felt, the title character has to start out unformed, and slowly begin to realize who he actually is. The plot reverses, say, Henry V, in which a dissolute young man realizes he's got the makings of a hero. Macbeth's realization that he's got the makings of a murderer requires that he isn’t fully-shaped as the play opens and that he come to know himself as it unfolds. As I say, there's a lot to admire about Denzel's performance, but he can't do that, now that he's the lion in winter. And this development isn’t merely something that could happen on planet de Chirico; it's a human problem that happens here on earth, where Macbeth is actually set. Denzel and Joel would’ve been better off doing King Lear, but there might not be a role for McDormand in that one.

Coen's film is pretentious, distracted, miscast, and ineffective in conveying the spirit of the play, which, I note, was written by William Shakespeare. Stream Kurzel's film instead.