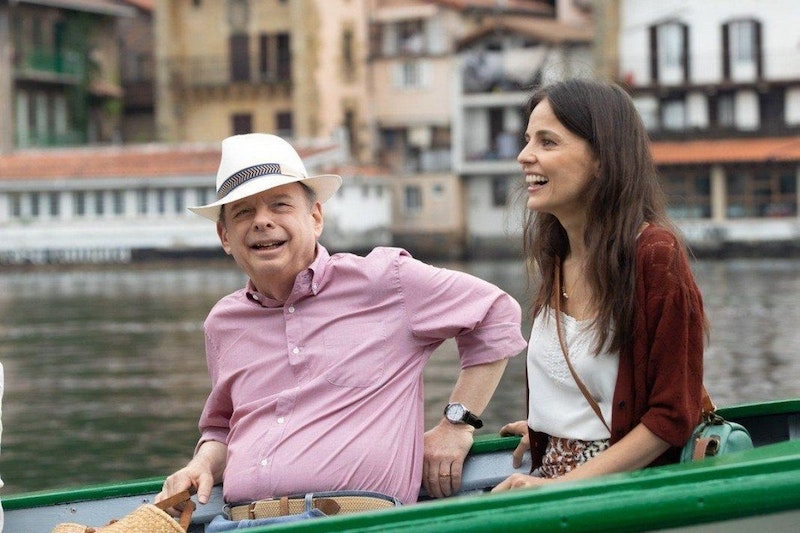 The rise of #MeToo has led to newfound scrutiny on Woody Allen, leading him to lose much of his mainstream respectability, along with his deal with Amazon. Some recent collaborators have gone so far as to disavow their work with him, and his memoir was kiboshed by one book publisher (and then picked up by another). However, that doesn't mean Allen is “cancelled" in any meaningful sense; in fact, he has a new movie opening, in U.S. theaters, this week. He's getting a lot more movies made, in fact, than most 86-year-old directors who’ve been working continuously since the Johnson Administration.

The new film is Rifkin's Festival, which had a festival run in 2020 and opened in various countries throughout 2021. The film is derivative plot-wise, hammering a lot of the same points that Allen has been hitting for decades, once again casting a younger actor as his own stand-in. And by younger,  I mean the 78-year-old Wallace Shawn. Rifkin's Festival is middling, with enough to draw Allen acolytes to the theater. On the plus side, the cast is well-chosen and Allen, working once again with master cinematographer Vittorio Storaro, does some inventive things visually, including some amusing homages to classic films.

While we get a few childhood flashbacks to an aggressively Jewish home that recall the memorable seder scene in Crimes and Misdemeanors, Rifkin's Festival is a rehash of Allen's last great film, 2011’s Midnight in Paris. Once again, we have a snobby American taking a trip to Europe with a wife he doesn't like, and getting over the boredom by entering a magical realist realm, one that includes a woman who he’s much more into than his wife.

Shawn plays Mort Rifkin, the Allen surrogate character, a sometime film professor who's been working for years on a sprawling novel. His wife (Gina Gershon), a movie publicist, drags him to Spain while she works the San Sebastian International Film Festival. Mort, though, spends the trip moping, since he has disdain for everyone around him, not to mention any film that was produced later than 1965. It doesn't help that his wife appears on the verge of an affair with Philippe (Louis Garrel), a hotshot French director who's the toast of the festival; he's an update of Michael Sheen's Midnight in Paris character.

Mort daydreams about placing himself in his favorite films, including works by Godard, Truffaut, Fellini, Bergman and Bunuel. His fusion of his Jewish Bronx childhood with Citizen Kane leads to a joke involving "Rose Budnick." The Exterminating Angel riff, however, pales in comparison to the masterful scene in Midnight in Paris in which Owen Wilson’s time traveler goes to see Bunuel and Salvador Dali, and they perfectly understand his predicament because they’re surrealists.

Later, Mort develops a crush on his doctor (Elena Anaya), a woman three decades his junior who's having marital troubles of her own. It's natural that he's found the one woman in Spain who loves Central Park and classic cinema. The film lands some solid satirical punches, by depicting every last person at the film festival as a shallow twit who doesn't know the first thing about good cinema; this starts with Philippe, who believes his new movie will singlehandedly bring a solution to conflict in the Middle East.

Allen doesn't go near his real-life troubles in any thematic way, except for having his surrogate character exhibit non-stop disdain for anyone having anything to do with how movies are made in the 21st century, or for that matter most of the 20th as well.

The film had its premiere, more than a year ago, at the same San Sebastian International Film Festival where it's set. The festival, though, doesn’t look like any film festival I’ve ever been to. There are a lot fewer people around, and major directors at film festivals don't tend to participate in press gaggles where anyone can shout out a question, as if they're the White House press secretary.

Once again, cancellation in Allens's case doesn’t mean his career is over. It just means his movies have more trouble getting funding, and arrive less often than the annual schedule Allen kept up for all those years. The movies have slightly less star-studded casts, and Allen can probably forget about ever appearing on camera again.