Apollo 11, a new IMAX documentary by Todd Douglas Miller, takes raw archival footage from NASA and cuts it into a seamless narration. A 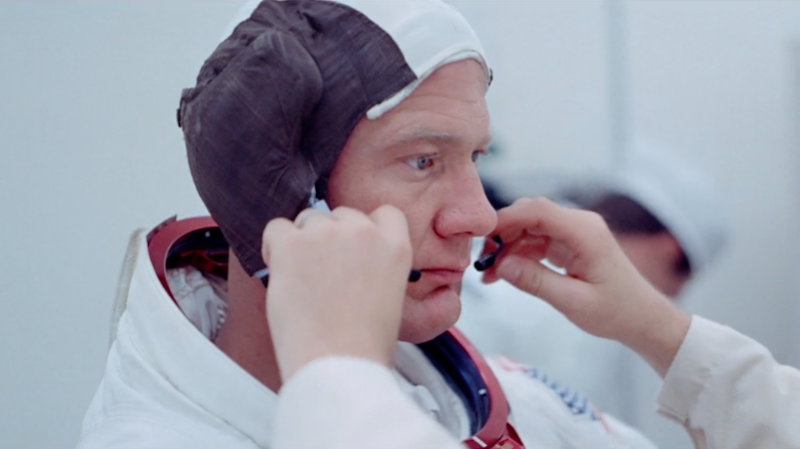 Director Damien Chazelle's Neil Armstrong biopic First Man arrived last fall as an Oscar contender, but its hopes slowly deflated throughout the next few months. Some of the criticisms of that film were fair—that First Man was dramatically inert and visually unimpressive for as long as it was earthbound—while others were not, starting with the ludicrous controversy about the lack of a shot of the flag being planted on the moon.

Now, the week after First Man won a single Oscar for Best Visual Effects, there’s another film about the same events that's superior. And not only because it left in the shot of the flag-planting.

Apollo 11 is a documentary, directed by Todd Douglas Miller, consisting entirely of previously unseen 70 mm archival footage, shot on earth and in space, over the course of the entire Apollo 11 mission, and married with audio that sometimes came from a completely different source. There's no voiceover or modern-day perspective, just the footage on its own, although there's some television and radio news footage sprinkled in as well.

While First Man raised questions of what there was for a film to say about the history of the American space program that wasn't already covered in The Right Stuff, From The Earth To The Moon, and Apollo 13, the new documentary gives us something vibrant and new. And that's because much of the footage had been sitting untouched at NASA and in the National Archives, and Miller and his team recreated it into a seamless narration.

Miller's documentary puts across the massive scale of the mission, especially the hundreds of people who worked different jobs for NASA. We see their nervousness in each step of the mission, and their exhalation when the feats are ultimately pulled off.

We don't get to know Neil Armstrong and Buzz Aldrin much, but there are fun character moments, like audio of one NASA engineer asking another if he heard about Ted Kennedy having driven off a bridge, an event that took place while the astronauts were on the way to the moon.

We also get the sense of how much excitement there was for the mission among the general public, as huge crowds gather to see off the Apollo astronauts, to welcome them back, and to watch different parts of the mission. It also leaves out that strange interlude in the Chazelle film in which it remembered for about two minutes that there was a counterculture in 1969.

Even if you're not a NASA buff, there's still legitimate suspense, and it's thrilling.

Apollo 11, which premiered at Sundance in January, is coming out on IMAX screens this Friday and in standard theaters a week later, with an arrival in museums down the road. And as with the last documentary that got a co-distribution deal with Neon Pictures and CNN, expect to see this one on TV later this year as well, in conjunction with the mission's 50th anniversary.