Jean-Luc Godard’s The Image Book is an overwhelming death rattle on art’s limitations in the face of human suffering. A+ 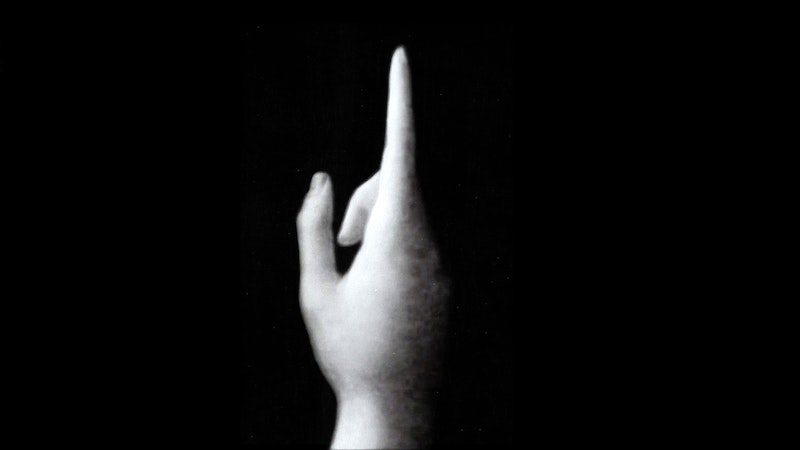 Jean-Luc Godard once said, “Cinema begins with D.W. Griffith and ends with Abbas Kiarostami.” That was three decades ago, and now I’ll say that cinema begins with A Trip to the Moon and ends with Godard’s The Image Book. Faust is invoked toward the end of the legendary filmmaker’s latest avant-garde collage essay: “Everyone wants to be kings, but no one wants to be Faust.” But the myth this movie is really about is Sisyphus: at 88, Godard looks back at his life—as a critic, filmmaker, cinephile—and comes to the conclusion that he has failed, that cinema has been unable to properly address or much less combat human suffering and atrocities like the Holocaust, African genocide, and a Middle East besieged with violence, unable to express itself. It’s an elegy to an art form that, in his eyes, promised so much and fixed so little.

The film’s first half is a dense collage in four parts, the first of which, “Remakes,” juxtaposes iconic representation in film with distorted found footage: the beach house exploding at the end of Kiss Me Deadly is followed by a mushroom cloud. Images of terrorists murdering “infidels” are followed by Jimmy Stewart diving into the San Francisco Bay to save Kim Novak in Vertigo. “Any act of representation contains violence against those represented.” In the following three parts, this theme is continued, as in "Those Flowers Between the Rails, in the Confused Wind of Travels," consisting mostly of scenes from movies that take place on trains. This allusion to the Holocaust isn't made obvious as in the other sections, where you might see a clip from Notorious or L'Atalante followed by an ISIS execution video. Godard never lingers on gore, and his video distortions are so beautiful and destructive that the image of a blown out blood red sea reads equally as digital fun and real death.

Godard’s been fixated on cinema’s inability to represent the Arab World (the “Central Region”) since at least 1976 with Ici et Ailleurs, another meditation on film’s limitations as a force of positive change. Two brief clips from that movie appear in The Image Book: an early computer screen full of text with the word “SCHEHERAZADE” flashing on and off, and a video screen stuck on a close-up of an unidentified victim with their face blown off. Palestine hired Godard, Anne-Marie Miéville, and Jean-Pierre Gorin to make a documentary about the PLO in 1970, but the project was scrapped just months later when almost all of their interview subjects were dead. It was shelved for four years before they returned to the project and repurposed it for something much more interesting. In Ici et Ailleurs, he had some personal investment, and Miéville narrates as well, interrogating Godard about his own pretensions and editorial decisions in the subjects he chose to film, whether or not he picked them simply because they were photogenic or because they were authentic representations of the average Palestinian citizen.

The second half of The Image Book features some footage of the Middle East, but Godard shot very little of it, and his analysis of the “Central Region” in the 21st century is at a remove. I understand why people have problems with it, because he asks and answers his own question regarding Arab representation in cinema. But it’s a mistake to view The Image Book as a political film: it’s a personal requiem, a broadcast from a distant outpost, a man who hasn’t marched or been on the ground as an activist in decades. This doesn’t diminish or compromise its message—the crisis in the Middle East is examined purely as a rhetorical device. You could substitute it for the Holocaust, or either World War (as Renoir did with Grande Illusion in 1937, a film he thought—or wished—could stop the outbreak of WWII).

I saw the second showing of The Image Book at Baltimore’s Parkway the day it opened. I ran into a friend outside afterwards, and we talked about the decline in film buffs and cinephiles. Across the street at the Mercury Theater, we watched dozens of people—friends, acquaintances, familiar faces—walk in and pay five bucks to see a show headlined by Leprechaun Catering. This was the musical equivalent of something as esoteric and obscure as The Image Book, and one of the best perks of living in Baltimore is its thriving and active avant-garde and experimental music scene. “Music heads are still around,” and they're right—but for whatever reason, cinephiles aren't as common even in a city with two art house movie theaters within a block radius, an historic movie palace like The Senator, and the booming Beyond Video nonprofit rental mecca. There were maybe 15 people in that screening of The Image Book, and when I saw it again on Monday, it was just an older couple who came just before the lights went down, and me.

Hans-Joachim Roedelius, the only surviving member of Cluster, easily sold out the Creative Alliance nearly two years ago, yet Godard, an even larger figure in cinema, didn’t rouse much discussion or enthusiasm in town last week. Another friend, currently living in Brooklyn, had no idea what The Image Book was or that Godard had a new movie out. I was thinking about all of this on Monday as I watched Godard slice dozens upon dozens of fragments of famous films and despair over its frivolity in the face of contemporary horrors. It’s a mournful procession, but at the very end Godard says, “Even if nothing had turned out as we had hoped, it does not diminish our hopes, for they were a necessary utopia.”

The Image Book ends with a clip of a man in a top hat at a high society party dancing until he keels over and dies. The work is its own justification, its own meaning, and for all the armchair philosophizing about the Middle East, Godard acknowledges his place of privilege in being able to examine these issues with rigor and serious moral consideration as a living legend, happily isolated in Switzerland but never in retirement, because retirement is death. He’s still broadcasting transmissions, and even if it changes nothing, having faith that it can is what makes life worth living.