Wait 'Til Next Year

For better or worse, Community will enter it's fourth season without creator and showrunner Dan Harmon. 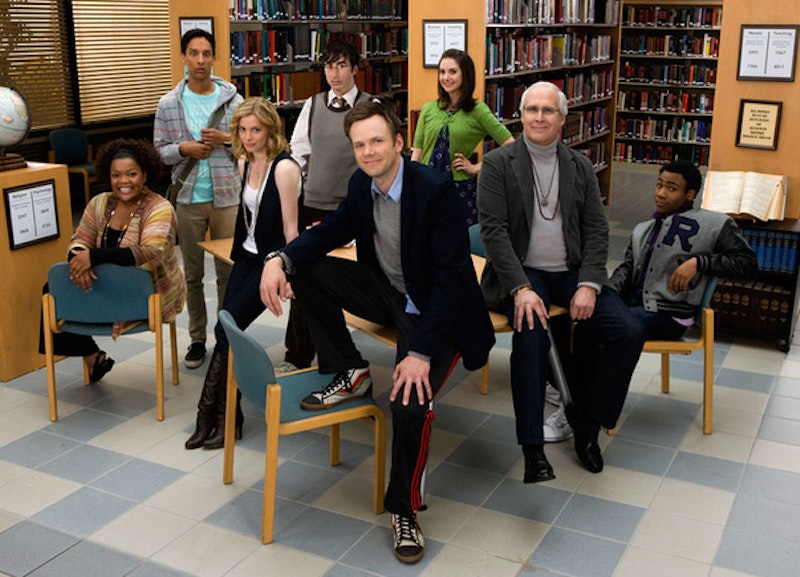 “You drove me there. Miss Daisy’s in the house. Thanks for the ride. Sorry about slavery.”

Just as I read that Dan Harmon—the creator of NBC’s Community—had been let go, even though the network renewed the show, the season’s last three episodes appeared in my Hulu queue all at once. It was a jarring and fitting end to a fitful season that labored through a hiatus and more than a few dud episodes. Community, at its best, is one of the funniest shows on television. Simply look to its perfect send-up of Ken Burns’ Civil War documentary as evidence. When it’s off, it’s really off, and is only salvageable as background noise, like a radio show while you putter around the Internet or the kitchen doing other things and occasionally picking up a piece of dialogue.

The inside jokes stacked on topped of inside jokes, the relentless and superficial (and often hilarious) topicality were a hard balance to hold in good times, without interruptions. It’s possible to do it over the long haul—I mean, millions of people hung around to see the “It was all in the dog’s head” finale of Lost, so anything is truly possible. But it’s difficult to hold onto an audience equally engaged in pop culture as it is distracted by it. Community toys with, complements, and subverts the very, uh, community for which it’s meant.

Which is all to say it’s a fun TV show, quick on the draw with character development just deep enough to provide pockets of nuance and even—gasp—recognizable sentiment. It took me at least a season and a half to get over the fact that the creator and his writers were able to make Joel McHale, from The Soup, a viable source of comedy. Mind-boggling (not as much as Lost, though).

But it’s all about momentum, and Community lost a ton of it in the past year or so. The series is poised to continue—but it’ll have to dig deep if it’s to make it through another season.

It’s easy to sympathize with someone who has just been fired. Given Community’s popularity with critics, the unfortunate manner in which he was let go, you’d think there’d be an outpouring of support. Except attempts at defending Harmon have been half-hearted at best. Most of the outrage has been tempered by the consolation: there will be a fourth season.

I’m pretty much entirely in agreement with you, Andrew, but I think the show actually might have a brighter future without its creator. Sometimes you need fresh leadership to invigorate a moribund franchise. That’s not a knock on Harmon, after all—no Harmon, no Community, but look no further than your beloved Orioles for an example of how a new manager can transform a cast of underachievers into a winner.

By focusing on fundamentals, Buck Showalter seems to have lit a fire under the O’s, and he’s done it before—with the Yankees, Diamondbacks and Rangers. With over 1000 career wins, Showalter is undoubtedly a great coach, so how is it that he’s never lasted more than four seasons with any of those teams? Or that twice, the teams he whipped into shape went on to win the World Series the year after he was fired? It happens over and over again to great coaches in every sport: losing team hires coach to instill discipline. After a few years the intensity starts to wear thin on the players, and the manager slowly loses the clubhouse. Then the team will bring in a “player’s coach,” someone with a more laid back approach. The team will rally around him, but when they inevitably begin to lose the cycle begins anew. It’s the rare exception that gets to pick when they want to retire. It’s what makes Gregg Popovich’s streak of 16 years with a winning percentage over .600 with the same team so remarkable.

And while Harmon’s role as show runner was vital to making Community what it was, the rest of the talent is still in place, and while the actors have publicly stood behind Harmon, I wouldn’t be surprised if they were secretly exhaling. Even those upset by his firing concede he’s very difficult to work with. Not to condone his tirades, hissy fits and what I picture to be daily slap fights with Chevy Chase, but Dan Harmon probably had to be kind of a dick to get things done. Community was an ambitious show, and Harmon refused to compromise.

It worked. For a while, now it’s time to move on. Unlike baseball, if the fresh blood doesn’t work out there won’t be another season.