The Parallax View gets the credit it deserves, but also consider The Groundstar Conspiracy, Seconds, The Internecine Project, and Cutter’s Way. 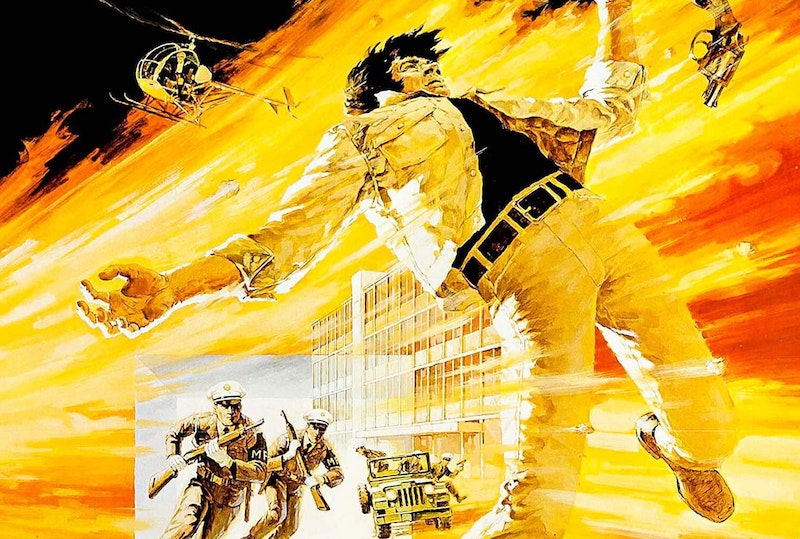 Despite the resurgence of true crime movies, television shows, books, and podcasts since success of Serial in 2014, popular entertainment is nowhere near as grim and probing as it was in the 15 years following the JFK assassination. We may have Adam McKay and his tentpole infotainments like The Big Short and Vice, and HBO and Netflix certainly love serial killers, child molesters, world’s masters and powerful entertainers run amok and grifts gone awry. One doesn’t have to look very hard to find “tough” stuff to watch: besides the Dahmers, Britneys, and Bundys, there’s the long overdue spate of films and miniseries like Barry Jenkins’ The Underground Railroad that deal intelligently with the history of slavery in America, finally correcting the absurd handshake ending of Roots over 40 years ago.

Even before Kennedy was killed, John Frankenheimer had started a genre with The Manchurian Candidate, the first MK-ULTRA thriller. His 1966 film Seconds went to further formal extremes and remains a bracing cinematic expressions of paranoia and psychosis, though it’s particularly poignant today for Rock Hudson’s performance and the meta-context of a tired man living a double life. Two years later, RFK stayed at Frankenheimer’s house in LA on the last night of his life; Frankenheimer drove him to the Ambassador Hotel to win the California primary and get murdered. Some friend!

Nearly two decades would pass until the door was slammed shut by Cutter’s Way, but the years in between produced some of the most chilling and honest American films about our government and the collateral damage that we all tacitly accept as a condition sustaining our artificially high standard of living. People of all ages and backgrounds are taken in, used up, and spit out by the American government constantly—you don’t have to be believe in any “conspiracy theories” to acknowledge that our leaders treat veterans like garbage, along with survivors, refugees, and more than ever in my lifetime, immigrants.

I’m writing for everyone who knows or would like to know that the term “conspiracy theory” was only propagated in the wake of the JFK assassination by the American government, and I’ll leave it at that. God knows there’s enough JFK flotsam and jetsam out there, go nuts, watch the Zapruder film 700 times and make up your mind for yourself about what happened on that sunny day in Dallas.

Beyond the overwhelming nuclear one-two of Dr. Strangelove and Fail Safe in 1964, and Frankenheimer’s own Seven Days in May from the same year (an adaption spurred by JFK shortly before his death), and the parallel collapse and transformation of moral standards in and expectations from popular entertainment, the barrage of tragic, violent, and nearly revolutionary events in 1968, the brakes were blown and no one trusted anyone or anything anymore. Mike Nichols talked about this on Charlie Rose in 1992, arguing not only that the television coverage of the JFK assassination and funeral permanently eclipsed art, but that “you could argue” that no great work of art has been produced since the Holocaust.

Perhaps not, but going through the MK-ULTRA thrillers, I’m regularly taken aback both by how straightforward and bitter their conclusions are, and by how closely they resemble the monologues about overcoming grief and personal trauma that we’ve seen so much of in the last decade. In 1972’s The Groundstar Conspiracy, Michael Sarrazin gives Tuxan, a proto-robo spy with a metal voice played by George Peppard, the kind of after-school special lecture that we’re used to seeing—but it’s usually about bullying, sexism, or racism, not the kidnapping, brainwashing, and physical and emotional exploitation of random people by shadow arms of the American government in order to further foreign policy and world economic projects that have nothing to do with their patsies. Remember, too, that Lee Harvey Oswald just thought he was meeting his “contact” at that movie theater in Dallas. He was supposed to die in there—but the cop’s gun jammed!

These post-JFK paranoia thrillers, along with the James Bond series and the mountain of knockoffs and spoofs it spawned (Joseph Losey’s 1966 modernist adaptation Modesty Blaise of the French comic strip is too long, but it’s second only to Austin Powers when it comes to spy spoofs, and number-fucking-one for theme songs), are fun but probably would’ve been unbearable to sit through when they came out. 1974’s The Internecine Project even ends with a self-effacing James Coburn laughing off “all this conspiracy stuff,” not because it’s untrue but because it’s such an obvious fact of life that anyone “investigating it” is a fool, just like anyone “investigating” whether or not the Earth is flat.

These are movies about people that’ve been brainwashed, drugged, hypnotized, kidnapped, and made to do things they can’t remember. Yet The Groundstar Conspiracy ends, after that final Sarrazin speech, with a response from Peppard’s Tuxan: “You have one thing everyone wishes they had: another chance. A chance to start over. And you’re telling me you’re going to throw that away? On me? Go ahead.” Sarrazin considers, then tosses the gun he has pointed at Peppard’s face, and they both walk away, presumably to witness protection, but more likely, an alley or a brick wall or a pile of garbage, anywhere that will do for a random victim of burglary.

A character like Tuxan wouldn’t bother checking the patsy’s pockets on purpose, to make the point that this was not an accident, and that, as Christopher Lloyd says in 1980’s The Black Marble, “there’s a lot of accidental deaths these days.” He’d leave Sarrazin’s pockets full, just to make the point that this could be you. As Pasolini said hours before he was murdered in 1975, “we are all in danger.” The MK-ULTRA thriller reached its apex in 1974 with Alan J. Pakula’s The Parallax View, starring Warren Beatty and shot by Gordon Willis (The Godfather, Annie Hall, All the President’s Men) that stands as the most formally stark and accomplished American films of the 1970s, beyond this little subcategory it dominates. Besides the rightly famous brainwashing sequence, Pakula’s film moves at a merciless clip, killing main characters (like Paula Prentiss) with cuts, showing them living and hysterical, trying to tell someone they’re in danger, to their heads being zipped up in morgues.

The Parallax View ends with a bang, but it’s this cold indifference that defines the movie and, in a different way, the final paranoia thrillers of this run: Cutter’s Way and Brian De Palma’s Blow Out from the same year. De Palma was unsure whether or not anyone cared about the deluge of political assassinations in the 1960s and 1970s, and he worked that into the script for Blow Out: whenever John Travolta’s character tries to turn in evidence or aid in the investigation of a possibly assassinated presidential candidate, he’s not only stonewalled but laughed at. The movie ends with no justice, and even more people killed, all for nothing—a typical ending for this set and 1970s American films in general (until Rocky).

Cutter’s Way destroys the genre by turning in on itself and becoming so confused that it inadvertently mocks those who “want to believe.” A modern moviegoer would more than likely call John Heard’s character a crazy “truther,” despite his bum leg and Vietnam vet status. Jeff Bridges plays straight man against Heard’s absurd and hammy paranoiac, and they end up “looking into” a local conspiracy that ends with Heard dead and Bridges in the house of a local politician, a gun in Bridges’ hand, whatever “conspiracy” they’re obsessed with still totally unclear to them and the audience, and a final gun shot that comes with a smash to black, leaving whoever fired unclear. In other words, total fucking breakdown. The snake has eaten its tail and it’s time to enjoy the 1980s, another decade notorious for its nihilism, paranoia, and poverty.

Heard’s performance in Cutter’s Way is completely ridiculous, but he does have one line that’s stuck with me, a concise description of the situation in this country for the last 60 years: “I watched the war on TV like everybody else… You had three reactions, Rich, same as everybody else. The first one was real easy: 'I hate the United States of America.’ Yeah. You see the same damn thing the next day and you move up a notch. 'There is no God.’ But you know what you finally say, what everybody finally says, no matter what? 'I'm hungry.’”