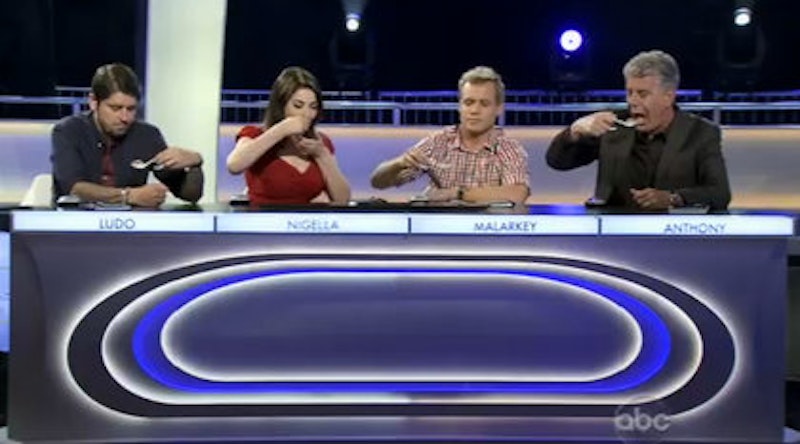 Given that the eating process is not one that lends itself to television—a medium that, as of this writing, cannot be ingested orally—the degree to which America has come to adore competitive cooking programs is fairly impressive. Bravo's Top Chef is now wrapping up its 10th season, having spawned three modestly successful spinoffs; Iron Chef America and Chopped, along with their own spinoffs, are still earning their keep at the Food Network; and even Gordon Ramsay's blatantly artificial Hell's Kitchen has been renewed for another season, along with his apparently less scripted MasterChef. The citizens have spoken (with their mouths full), and they want more food-centric reality TV.

To this mix of televised gluttony, then, add ABC's The Taste, a new competition that claims to return cooking culture to what matters most. It's a barely-disguised (and simpler) re-skin of The Voice for foodies, but the show's conceit is nonetheless intriguing. Virtually all of the well-established competitions feature industry professionals of various levels of competency, all at least mildly familiar with contemporary styles of presentation and graded heavily by big-name judges on creativity and envelope pushing. (Top Chef, for one, will happily crush a contestant's dreams for a dish that bores the judges.)

The Taste eschews all that. Sure, Charlie Sheen's personal chef is there, along with a few professionals, and industry celebs Anthony Bourdain and Nigella Lawson are judges with high expectations, but also present is Lauren Scott, a 23-year-old home cook who won the show's first immunity challenge (with judicious help from Lawson, but still). Bourdain, Lawson, and fellow judges Brian Malarkey and Ludo Lefebvre (quintessentially American and French, respectively, a pairing which leads to an entertaining rivalry) have only a spoonful of each dish their teams prepare for a blind taste test that determines the unlucky few who must go home. For those who watch Iron Chef and get pissed off when a dish wins based only on classy presentation, The Taste is a soothing balm; at last, a food competition where flavors, not professionalism, are always the deciding factor.

No balm, however, can ease the irritation caused by the sneaking suspicion that ABC's producers think their audience has the short-term memory of a brain-damaged child with ADD. They have fashioned the phrase “blind taste test” into a club, so as to more efficiently bash the point of The Taste into our heads. We get it: the judges don't know who they're voting for, so the teams only kind of matter. No amount of repetition or frantically dramatic background music will make that concept more intense. (For extra amusement, though, try taking a shot every time Bourdain utters those three little words; you can tell he'd like to do the same.)

Even though they have a fairly entertaining, fresh series on their hands, ABC seems terrified that its audience will suddenly wake up, realize they aren't watching Modern Family and flip the channel. In order to keep us interested, the stakes must be mentioned as often as possible. Except we're three episodes in, and my girlfriend and I had no idea what the prize was supposed to be until I read an interview with contestant Mia Hall online. (It's $100,000 in cash and a new car, standard game show fare.) Of five hours of airtime thus far, ABC has devoted a third of that (at least) to clips of judges and contestants agonizing over how the taste test is blind, there's no room for error, and they need to win—and did they mention it was a blind tasting? Except for a few one-note montages of exposition during the audition episodes, I don't even know that much about the contestants, which makes it difficult to care who gets eliminated. Several are cartoonishly bitchy, some are wholesome, and the rest simply... exist, floating in a vacuum of character development.

In attempting to persuade its audience that it's totally different from anything we've ever seen, The Taste is close to convincing me that, despite its back-to-basics mentality and delightfully high dosage of Bourdain’s sarcasm, it's just another reality show featuring food I'll never taste. If we've finally reached cooking-show critical mass, The Taste is the program to prove it—and that's a shame, because I'm still hungry.