Women are window dressing for men to seduce each other into being men. 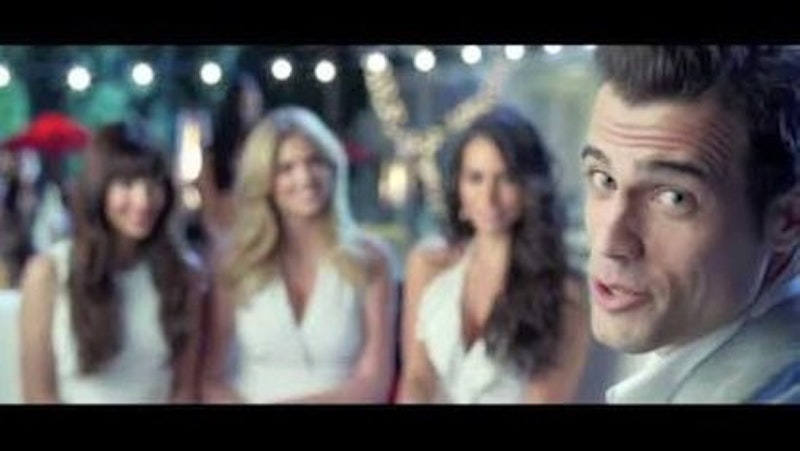 Pop culture is everywhere and inescapable, so there's an understandable knee-jerk reaction to wish that it’s not horrible and soul-destroying. The most recent manifestation of this phenomena centers, somewhat desperately, on a Gillette ad, in which some random narrator receives body-grooming advice/diktats from models Kate Upton, Hannah Simone and Genesis Rodriguez.

No one thinks that this is a great blow for freedom and sexual equality or anything like that. But various commenters have argued that it's at least a pleasurably clever rejiggering of gender norms. Paul Farhi at The Washington Post argues that the ad reverses the usual roles of objectified and objectifier:

"What’s remarkable about the Upton TV commercial is not just its basic message—guys, you should be shaving down there—but who’s delivering the message. In the spot, set amid a pool party that suggests the last days of ancient Rome, women are set up as the arbiters of what it means to be manly, a role women rarely play in TV commercials. In this case, the women want what men demanded of women long ago—that they become hairless."

Hanna Rosin at Slate agrees—and manages to find an even more cheerful message. The ads aren't just reworking gender roles; they're capturing the small intimate sweetness of moving in together (with supermodels, no less.)

"No one really thinks that Kate and Hannah and Genesis are doing these men any damage. Why? Because the vibe they tap into is not really "last days of Rome, women rule the world," but "first days of moving in together, girlfriend throws out my La-Z-Boy." The ad takes for granted a truth that is sometimes overlooked: that men welcome their partners' small interventions, the way we steer them through the endless set of never-done tasks that constitute women's work."

I hate to be a party pooper but… okay, I kind of like being a party pooper. We need more party poopers. Because, for the most part, pop culture is not transgressive, sweet or insightful. It's predictable and awful. And that goes doubly for advertisements, especially this ad.

If you watch the ad closely, you'll notice something odd. It's true that the supermodels are consulted about their preferences in male foliation. But, those preferences are almost entirely routed through the male narrator. He doesn't even ask the women what they want; he states their desires for them. He tells the (presumably male) audience that Kate likes men with a little hair on their chest, and then lets her finish the sentence by saying she doesn't like hair on the back. Then he goes to Hannah… and she doesn't even get to speak, instead merely winking in acknowledgement when he declares that she likes men with smooth stomachs to show off their six-packs. Finally, he declares that Genesis likes men completely hairless and she doesn't think that's weird—to which Genesis does a little model shimmy and affirms, "I don't." And that's all she gets to say.

Contra Rosin, then, the ad isn't really about intimacy between men and women: how can it be, when the women don't actually get to say anything? Nor are we actually having women arbitrate male beefcake—again, to be an arbiter, you need to be the one talking, rather than the one on the sidelines cheering the arbiter along.

This ad doesn't have much to do with women at all. The primary relationship in the ad is not guy/girl, but guy/guy; instead, the ad is 1:22 of a guy talking to other guys about how to be a man. That this male/male instruction is more than a little homosocial shouldn't be especially shocking. As Eve Sedgwick discusses at length in her classic book Between Men, patriarchal relationships within men are often sealed and charged with a not especially suppressed eroticism. But, as Sedgwick also argues, acknowledging that eroticism is verboten—which means that male/male erotica have to be routed, or deferred, through women. Thus the supermodels, who stand there in their evening gowns helpfully vocalizing and validating narrator dude's kinky desires. They don't say much (or in Hannah's case, anything) because it isn't their words or desires that are at issue. They're just window dressing to make it okay for men to seduce each other into being men.

That seduction involves conspicuous consumption, gratuitous treatment of women as voiceless window dressing, and complicated and deliberate repression of homosexuality as an acknowledged possibility. And contra Farhi, it doesn't reverse gender roles: women are still window-dressing for male psychodrama. Contra Rosin, there's no intimacy; instead, the ad is an almost ludicrously neurotic effort to leverage intimate emotions it simultaneously wishes to deny. Being a man, according to Gillette, involves deceiving yourself about who you love, treating women as things, and buying shit. Which is not exactly surprising, but isn’t’ really cause for celebration, either.