Liberals Eat Their Own, and it's Aaron Sorkin's Turn

In reality, Sorkin’s The Newsroom is a great TV show. 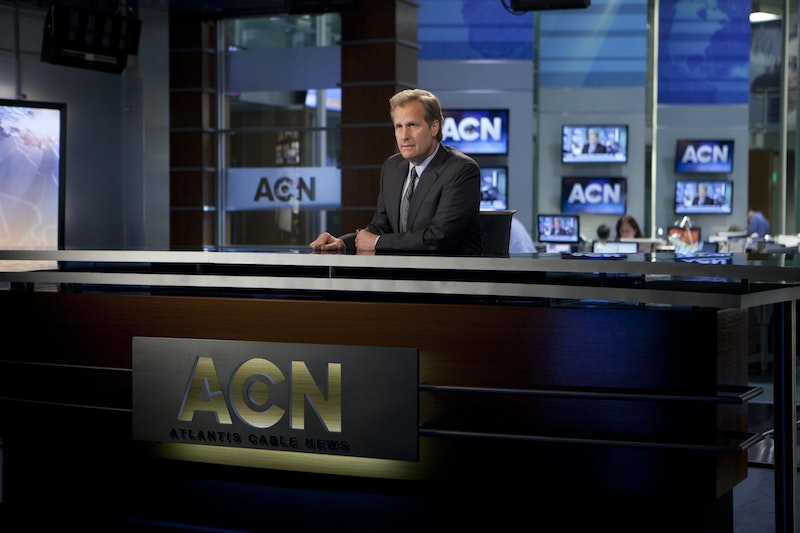 One of my favorite current TV shows is Aaron Sorkin’s The Newsroom, an HBO show that’s slavishly criticized every week on websites that you probably don’t want to know about. As Sorkin is an outspoken Keith Olbermann-type liberal—sorry, progressive—it goes without saying that ideological allies are leading the smears against the veteran director. Fortunately, I have no vested interest in the rise and fall of Occupy Wall Street (which Jeff Daniels’ Will McAvoy, The Newsroom’s star and evening anchor on ACN, magnificently shreds while interviewing one of the “non-leaders” from Zuccotti Park) or the au courant demonization of anyone who works on Wall Street, so I watch the show on Sunday nights with a clean slate.

It’s my bet that liberals get so agitated by Sorkin because when they watch The Newsroom it’s like looking in the mirror and are horrified by the vision. You’d think there would’ve been dancing in the streets when McAvoy (a wavering Republican who’s been re-born as crisis-torn middle-aged man who, yes, “speaks truth to power”) dubs the Tea Party as “The American Taliban.” This is a benefit of being an economic conservative/social liberal: hey, I’m just like Jeff Bezos! By the way, I was also a fan of Sorkin’s The West Wing, Sports Night, Studio 60 and the films The Social Network and Moneyball.

Sourpusses have called The Newsroom “sanctimonious,” “sermonizing” and “shrill,” to cite just three cat-calls. I’ve no idea what they expected from Sorkin; didn’t they ever watch Martin Sheen play Abraham Lincoln/FDR on The West Wing? It could be that I’m a fan of The Newsroom because it’s fiction: a decade ago I stopped watching the political cable and network shows because they were so infuriating (And not just for incessant commercials). Chris Matthews making a fool out of himself; Fox anchors giving ammunition to liberals; Lawrence O’Donnell… well, he’s the “real-time” Aaron Sorkin; Brian Williams speaking from Mt. Olympus on NBC; David Gregory’s Meet the Press, which, aside from booking the same guests as competitors, makes a mockery of Lawrence Spivak’s deadpan moderation of the show I loved when returning from Sunday school back in the 1960s. To me, The Newsroom is a fairly accurate portrayal of a news show, with the glamorous anchors talking about the disenfranchised while they bark at some intern to fetch them a bottle of Perrier, or whatever $10 bottled water that’s now in vogue in the DC/NYC/LA media club.

I usually like the film criticism of The New Republic’s David Thomson, but his bit on The Newsroom in the biweekly’s Aug. 19 edition was, if not silly, well, infuriatingly high-minded. He writes: "I wouldn’t miss 'The Newsroom.' But I resist the suggestion that it has much to do with our world and our need to know. Just as 'The West Wing’ was Sorkin imagining himself president, 'The Newsroom' is his chance to think it might be fun to run a news show… ‘The Newsroom,’ more than it knows, but in ways it cannot hide, concerns a country and a communications system at the end of their tether."

Oh, and this beaut: “The Constitution now seems like a board game manipulated by the hallowed few whose task it was to protect and preserve it.”

If Thomson really believes—wasn’t just juicing his copy for the sake of titillation—that the Constitution’s been neutered and that the United States is at the “end of [its] tether,” then I hope he’s gone the survivalist route, moved to Montana and built an underground bunker to weather the end of life as Americans know it. While we agree that the legacy communications system is nearly kaput, which is mostly a perk of cultural evolution, I don’t share his dark thoughts about a cabal of the “hallowed few” running the United States for their own profit and celebrity. Oh, maybe Barack Obama, Nancy Pelosi, John Boehner, Arianna Huffington, Ted Cruz, Rand Paul, Harry Reid and Arthur Sulzberger Jr. harbor such fleeting illusions while kicking back at home, pouring four fingers from a $400 bottle of single-malt Scotch, but even those paragons of narcissism run amok know that in 20 or 30 years they’ll be retired and fiddling with bird feeders in some quaint New England country home. Not everyone has the stamina or sheer audacity of Rupert Murdoch, after all.

My main beef with The Newsroom is that because of production restrictions it’s dated—the current season is mired in the 2012 election campaign, and requisite Romney-bashing, so you might have to go on auto pilot for a few minutes at a time. Too bad the show couldn’t do a South Park and bend current events to the liberal elitist point of view. Then again, Mark Leibovich’s entertaining This Town (in contrast to The Newsroom, the book’s this summer’s talisman for liberals, kind of like Thomas Frank’s tedious What’s The Matter With Kansas? In 2004) begins in 2008 and, as they say, its “narrative” is barely disturbed. But Leibovich works for The New York Times, and an a-lister in This Town, while Sorkin is a borderline misogynist with all sorts of weird Hollywood baggage.