Brand Medicis in the movie industry, Teresa Wright in Roseland, and the possibilities of the advertorial film. 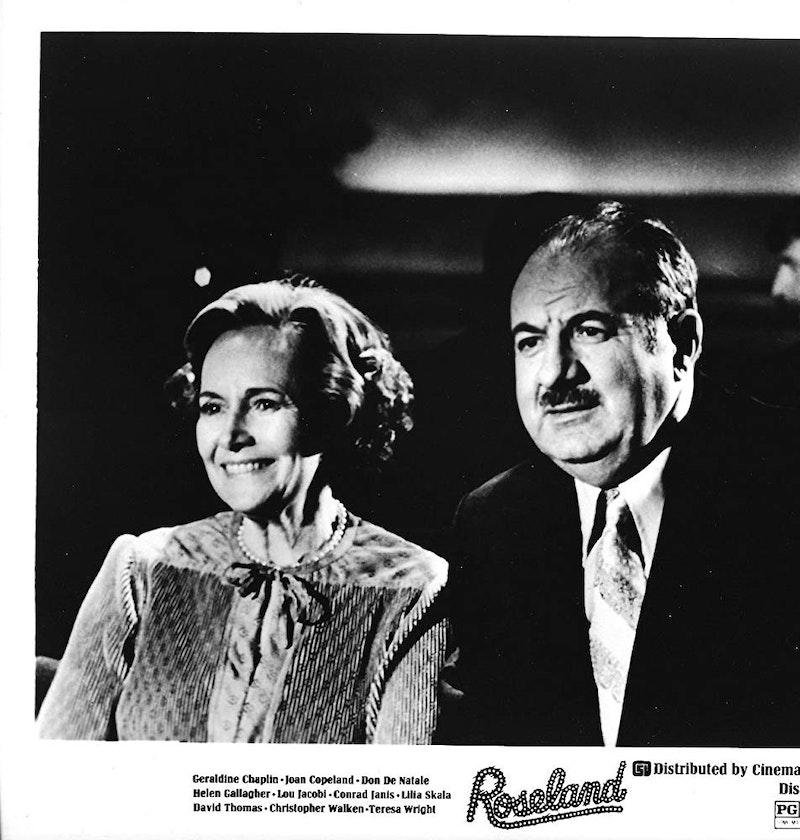 Options are limited in Hollywood. Only so many movies can be made with the money they deserve. Other than the obvious—superheroes, sequels, remakes, toys—there isn’t much left. So what about the advertorial film? The former four function as such already, but what about a standalone feature length endorsement of a product or a place? Some examples already exist, critically lauded (The Lego Movie) and derided (The Emoji Movie), but these remain still in the realm of children. Kids are much smarter and more discerning than anyone gives them credit for, and they know they are being sold something—no guilt necessary.

Would you feel stupid going to see a comedy about pharmaceuticals set at Kaiser Permanente HQ, or a middling drama about the many lives of the guests at Manhattan’s Four Seasons? What if they’re good, what if they’re worth watching? Perhaps indie filmmakers should take a cue from NASCAR drivers and pin pennants on their actors advertising various brands. Fill the mise en scène with Coca-Cola cans, Sweetgreen bowls, and the whole rainbow of American Spirit cigarette packs. It’s Pride Month, after all. And what unites people more than cigarettes? Now we’re talking protests, think pieces, meek media discussions about the rise of smoking among Millennials and Gen Z.

Forget about shame because it’s done. Although I’m a broken record in saying that The Emoji Movie upset people so much because it was a reflection of rather than an escape from reality, it remains true. I watched the 1977 James Ivory film Roseland recently via a library DVD I bought for $6 on eBay. No lost masterpiece or cult curio, it’s merely another movie featuring actress Teresa Wright. I respond to her performances and her screen presence as if I knew her, the only movie star I’ve ever felt close to, and I have no idea why. Wright is one of the forgotten victims of the merciless patriarchal studio system, blacklisted in 1950 for breaking her contract with Samuel Goldwyn and demanding better treatment and better pay. Her career prospects plummeted and never recovered, without any belated appreciation in her twilight years via appreciative young directors in awe of her abilities. So John Travolta does the Twist, and Pam Grier flies the golden skies through Tarantino’s eyes. He saved them from exploitation, but Wright never knew Mandingo, or Death Wish, or Hallowen H20. Coppola put her in The Rainmaker opposite Matt Damon, but that final screen appearance in 1997 was all too brief.

But Wright knew Roseland, where she danced the waltz as a widow with a confused Super Mario out of uniform. Ivory’s film is made up of three discrete sketches, with Wright starring in the first. Christopher Walken and Geraldine Chaplin dance the Hustle and not much else in the second segment, the bulk of the film, and Lilia Skala dances her partners to death with the Peabody in the final segment. It’s a confused film, one with little drama or comedy, where these people never meet or interact in the magical realist Roseland Ballroom. Did the Merchants own Roseland? No—neither James the director, nor Ismail the producer had any connection to the ballroom. In fact, this was a difficult production to pull off. Besides a restriction to shoot inside the ballroom only on Wednesdays, the Merchants were unable to alter any aspect of the venue to accommodate filming.

It was no tax write-off, either: “A local Teamsters Union demanded that Ivory hire a scenic artist and an art director, which Ivory argued made no sense given the restrictions by the club. Nevertheless, the Union began to picket the production until a scenic artist and art director were hired to sit around and do nothing. Then, the Screen Actors Guild thought there were too many shots of the Roseland regulars, who were not in the Guild as extras. Ivory had to sign a contract that he would not have a non-Union extra be shown in a medium-shot or a close up with a SAG actor.” Perhaps no one remembers Roseland because no one came out alive except Roseland itself.

The Hustle and the Peabody are disposable and dysfunctional segments, but it’s Wright who makes Roseland more than a forgotten playbill or a piece of junk mail. So rarely shot in old age, Wright glides with the understated grace imbued in all her performances. But like almost everything she made after 1950, she’s the depressed and unfulfilled widow, already stuck playing mothers only a decade after she threw Uncle Charlie from the train and died in Mrs. Miniver’s arms. Thirty-five years later, she dances with a louche bachelor and sees her dead husband in a magic mirror. She begs the bachelor to dance the waltz with her so she can see Eddie, her beloved. No wonder he’s put off, but he gets her drunk after many nights and she wails “I HATE LIVING!” and even Jesus wept. But of course she learns to live with her loss, and no longer does she see her dead husband in the magical mirrors at Roseland, but then she disappears too, only half an hour into the film. She gets no reprisals or returns, and she shot her whole segment in only eight days.

I only sought out Roseland because of Teresa Wright, but if the venue hadn’t closed in 2014, maybe I would’ve checked it out next time I went to Manhattan. Maybe I too would look in the mirrors for phantoms of lost love and flowers turned to dust. Advertorials work, and you don’t have to be especially subtle about it. Bring me a screwball comedy set in a Burger King, or better yet, an Éric Rohmer homage set in an Arby’s (their Twitter is already depressed and horny enough to qualify). What about a heist inside of a Bank of America foiled by the tellers? If BOA puts up the money, would any filmmakers of note take the bait? They should, because patrons are hard to come by in 2019. The Medicis are now the Mercedes, and the McDonald’s. Let them fund your passion project so you may hawk their products. Everyone wins.