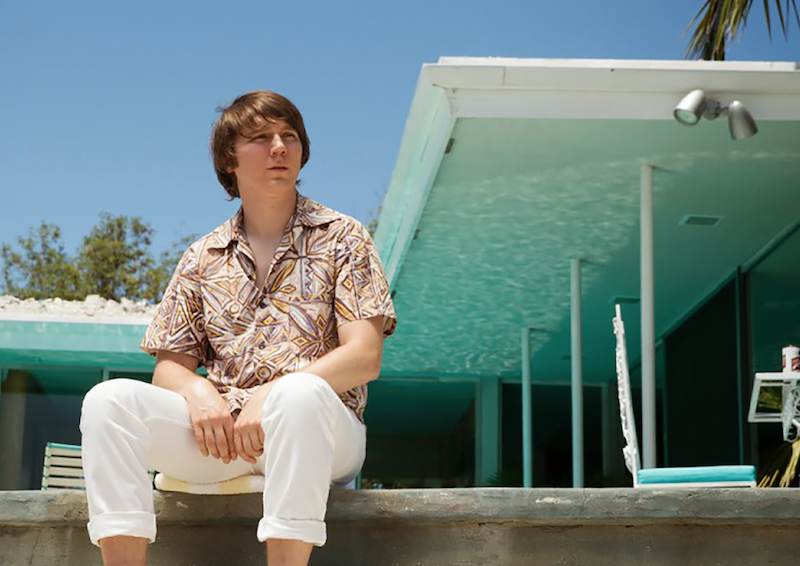 Pop music biopics are a notoriously bad waste of time, never satisfying fans of the artist and confusing the casual viewer with poorly abridged and mangled story arcs. A lot of them tank and end up in 7/11 checkout bins weeks after their initial release, but even the mega-hits that rake in buckets of cash and Academy Awards like Walk the Line, Ray, and Amadeus liberally conflate events and leave people out for convenience’s sake. The bargain bin of crap is much deeper: Notorious, The Doors, Last Days, Jimi: All is By My Side, Nowhere Boy, Man in the Mirror, Beyond the Sea… A big budget and good acting doesn’t mean much when the screenwriter rewrites history to fit the format. Todd Haynes’ I’m Not There is by far the best musician biopic I’ve ever seen, because the surreal, time-hopping impressionism and the conceit of having six actors play Bob Dylan captured the artist’s essence and overflowed with obscure references and hidden treats that could’ve only come from a fan. Unfortunately, it was a failure in the eyes of investors because most people that saw I’m Not There were left unknowingly repeating Greil Marcus’ eternal dig at Self Portrait: “What is this shit?”

Half a dozen crap films about The Beach Boys have been made, but Bill Pohlad’s Love & Mercy is the only one to take seriously. Don’t be dissuaded by the awful title—despite suffering from familiar problems and a poor approach to story, it’s a pretty decent movie that actually gets better as it goes on. I went in with low expectations—that title, Christ!—but I was quickly sucked in and actually moved to tears early on when Brian Wilson, played by Paul Dano, is working out “God Only Knows” on a piano in his parents’ living room, singing tentatively, missing a chord here and there while his abusive asshole father watches on fixed with a scowl, quick to dismiss that “it’s not a hit.” Dano disappears into the role, with a striking resemblance to Wilson and all of his tics and body language on lock. We see the Wilson brothers discussing Rubber Soul at a pool party, and follow them through the recording of Pet Sounds, “Good Vibrations,” and up to the aborted SMiLE sessions. It’s fantastic—unfortunately, it’s only half of the movie.

Love & Mercy jumps back and forth from the mid-1960s to the mid-80s, a hellish period in Wilson’s life that deserves its own two hours, I guess. Wilson, washed up and mentally ill, ends up under the legal guardianship of a quack named Eugene Landy, who misdiagnosed Wilson as paranoid-schizophrenic, force-fed him anti-psychotics and tried to alter his will for a big payday. Point being, Wilson threw himself into the arms of an abusive sociopath that treated him even worse than his father. Obvious pop psychology is boring—I wanted more scenes of Dano in the studio going back and forth with session musicians, explaining why he wrote two bass lines in different keys. Even more Mike Love being an asshole would’ve been better than 80s Wilson, played by John Cusack in bizarrely awful makeup that looks like he never washed off after filming The Raven. Then again, what were their options? Cusack looks nothing like Brian Wilson, at any point in his life, and Cusack has a bad habit of always being Cusack on screen, no matter the project. Dano has the same problem, but he picks characters that fit his histrionic, quiet kid always on the verge of a meltdown persona.

Love & Mercy leapfrogs constantly between these two periods, yanking you in and out of engagement and giving short shrift to the parts of the movie that really work. The only explanation I can think of is that Pohlad wanted to make a movie about a “tragic genius” instead of one about Brian Wilson. This is exactly the sort of broad stroke approach that sinks most musical biopics, when unseen hands try to make the movie appealing to as many demographic groups as possible. It’s a disappointment that spoils an otherwise exceptional film. The Dano half has only one glaring omission: Van Dyke Parks, a perpetual also-ran and egregiously under-acknowledged genius, is missing from the recording of “Good Vibrations.” He shows up later at least, for about two seconds, but his omission from those legendary studio sessions is inexcusable. Parks just can’t catch a break—the filmmakers throw salt in the wound when Dano is shown instructing a session player how to play the famous cello triplets that are a signature part of the song, one of the most famous songs of the last hundred years! It’s not an aside either—Mike Love and the rest of the band argue about the triplets for about five minutes! Just to be clear: Van Dyke Parks was there, and he came up with the cello triplets, among hundreds of other parts and arrangements and overdubs and ideas during the making of “Good Vibrations” and the ill-fated SMiLE sessions, which are passed over here, used only as evidence of Wilson’s deteriorating mental state. This isn’t an adjustment that benefits anyone—it makes fans mad and misinforms everyone else. These are the sort of selfish changes motivated by money and marketing in biopics and movies in general.

The rule remains that documentaries are always more accurate and enjoyable than biopics. Yesterday, I put on Beautiful Dreamer: Brian Wilson and the Story of ‘SMiLE’ available in full for free on YouTube. Maybe most people prefer the dated constraint of a two-hour movie in three acts, but I’d rather watch a documentary where all the major players are interviewed instead of watching famous actors approximate history aiming for an Oscar nomination. First of all, it’s clear that the filmmakers of Love & Mercy took dozens of cues from Beautiful Dreamer, mostly in art direction and clothing (I did a double take when a picture of Parks is shown wearing the same olive green paisley shirt that he’s got in his two scenes in Love & Mercy).

All the information the layman might’ve learned from Pohlad’s film is already in Beautiful Dreamer, alongside other anecdotes that weren’t included. Wilson describes his first experience smoking pot, and how he drank a glass of water and realized he’d “never tasted water before.” The bit that blew my mind comes right after, when Wilson recalls having visions of musical staves and multi-colored notes floating mid-air, and manically transcribing what he saw. This is how he wrote most of Pet Sounds and SMiLE. Now that is fucking cool! Never mind, skip Love & Mercy, stay and home and save 12 minutes with a more accurate and informative documentary.