A less painful, more tolerable batch of children’s films include the new Paranorman 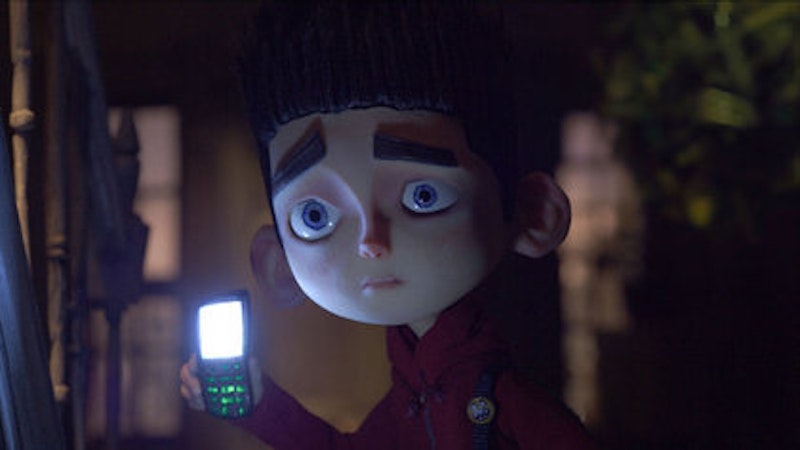 Not everyone makes television shows or films with the idea that an adult may be watching. It’s a Sesame Street vs. Barney programming battle. In Sesame Street, the writers understood parents would be watching with kids, so subtle sarcasm, innuendo and a pinch of humor were combined like an old family recipe to create a show that could run daily on household TVs without making parents run to the next room to listen to Pink Floyd albums.

Barney was a parent’s worst nightmare. A big fucking purple dinosaur and not a single laugh for mom and dad. Barney spoke directly to the kids, and (unfortunately in the case of my daughter) they listened. They talked back to the TV. It was, at least, ethnically balanced, though I’ll never forget sitting in a Friendly’s in the 90s with my daughter and having her point out the black woman in the booth next to us, declaring “Look, Mommy! It’s a Tasha!” Damn our white bread neighborhood, I thought.

So for the past 18 years I’ve been a mother, I’ve had to watch all kinds of kids’ garbage on TV and at the movies. Last weekend, I took my two younger kids to see the new movie Paranorman (pictured above), which they’d been looking forward to since the previews started months ago.  It’s about a kid who can see dead people—yeah, kind of like whatshisname in Sixth Sense, only a cartoon animated by the people who gave us Coraline (another good children’s film). It’s reasonably well written, the kids loved it, and I thought it was fine. “Not bad for a kids’ movie,” I thought to myself as I often do in kids’ movies.

If you find yourself the parent of small children or charged with the care of young children like nieces or nephews, this list is for you. Sure, you can watch SpongeBob and laugh at all the blatant gay references. But here are some more options.

5.) Some stuff by Disney, but not a lot. I mean, Disney is Disney—everyone has their favorite and some movies are more annoying than others. Tangled is the Disney I’ve enjoyed the most recently, because the evil witch is super evil and we get to see her die. In general Disney does a good job of remembering there are paying adults watching who will be the ones buying the movie’s matching merchandise on Amazon later. And I love the original Fantasia: it’s trippy and scary.

4.) Shrek. Not so crazy about sequels, but the original is great. And while we’re on Dreamworks, I’ll throw in Kung Fu Panda, too. They’re both pretty fun to watch.

3.) Wall-E and pretty much anything else by Pixar, too. Wall-E is fantastic—it made me cry, which is ridiculous. It’s a great romantic story, and it makes fun of fat, stupid Americans. What more can you ask for in a film? More fab Pixar: Up, Monsters Inc, Toy Story (all three), The Incredibles, Ratatouille and Finding Nemo.

2.) Anything directed by Tim Burton depending on kid age appropriateness. You got your Corpse Bride, your Nightmare Before Christmas, and your lesser known but still cool 9 and then you can get into the live action stuff like Alice in Wonderland, the super campy fun new Dark Shadows, and then you start going old school with Beetlejuice and Edward Scissorhands. I can’t wait to see his new Frankenweenie film coming soon.

1.) Fantastic Mr. Fox. A lesser known children’s film, it’s by far my favorite to watch with the kids. The writing, stop motion animation, storyline, humor, everything is pitch perfect. And, yes they know adults are watching this one. Instead of using swear words, they use the word “cuss” in the place of them… as in “That’s a clustercuss,” “What the cuss?” etc. Hilarious and fun to watch.