From Reflections of Evil to alien fairies. 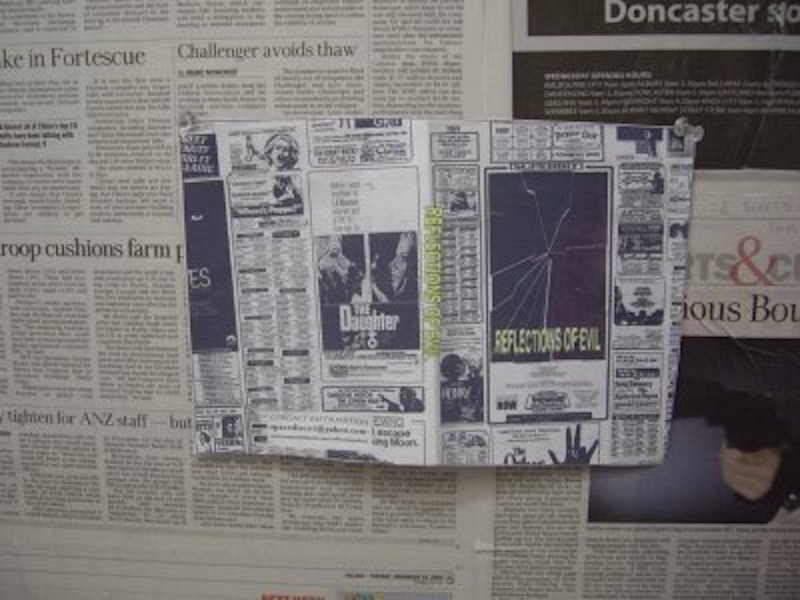 I’ve been a fan of Damon Packard since a DVR of Reflections of Evil arrived in my mailbox many years ago. While I couldn’t discern how much evil was being reflected, and from whence this evil was coming, something about the hyper-real, obsessive and abrasive direction of the movie infected me and wouldn’t let go. Maybe it was the intense anger that seemed to envelop Packard’s fictional world, or maybe it was the most epic barf scene ever captured on film, but it was enough for me to want to watch more of Packard’s films.

Collin David: Reflections of Evil (2002) was one of the first films I’d ever seen of yours, and it employed a surreal collage of elements from 1970s and 1980s television, as well as much of your own footage, and some amazingly grotesque Foley work. The entire experience predated the "mash-up" culture and aesthetic that became prevalent in the past few years. What's your reaction to the direction that "mash-up" culture is going?

Damon Packard: Oh, I don't know. I never considered Reflections a "mash-up" film to begin with, it uses bits and pieces of vintage ABC promos and such to establish transitions and mood but it hardly makes up the bulk of the movie, which is all original footage. I've sometimes said, "You put five minutes of other footage in a 136 minute film and people call it a mash-up." Now I realize anyone who watched the film probably wouldn't think that but to those who haven't seen it and know what a mash-up is, reading a review they may think otherwise. Mash-ups don't interest me in any form whatsoever, it's something anyone can do with no money and it's certainly become a bit over-exhausted. I've only used other footage to “enhance” things the film needed but I didn't have the budget to film or create. The Star Wars Mockumentary was a case of wrap-around footage, it was an idea that seemed like it could work for the time, and needed to be done... But it wasn't a mash-up. I consider a mash-up a film that either entirely or nearly entirely comprises other found footage.

CD: What was behind your decision to create a film inspired by "Elfquest"? Have Wendy or Richard Pini expressed anything regarding your ideas or loose appropriation of their comic, or use of their art in your promotional materials? Would you like them to? Do you consider it to be more of an homage or a parody?

DP: If you’re referring to the little Super8 film I made inspired by Elfquest—Apple—back the early 90s, it has no relation to the Elfquest graphic novels or stories other than a few borrowed names—like Rainsong, Dewshine, etc. I did send a copy to Richard Pini way back then and recently posted it on his Facebook page that he mildly acknowledged in a friendly way. He was also kind enough to write back, way back in 1994.

The film I'm currently working on also has nothing to do with Elfquest other than borrowing the name of the main character, Foxfur. Now, if I were to ever actually raise enough money to make it as a feature I would probably change that, but other than that and the fact there is a hidden commune of elves (Lemurians) living in Malibu Creek State Park in the current script... it has no relation to any of the Elfquest stories. In my story, the Elven myth is explained with their extraterrestrial origins. I think Warner Bros owns the movie rights for all that property now.

CD: Akron, Ohio seems to be the birthplace of a lot of apocalyptic, desolate ideas and artists who are concerned with the decaying state of humanity. Do you think that Akron had a prevalent role on the aesthetic you work in now, or is it from a darker place?

DP: That's an interesting perspective. I know a lot of artists and musicians are from Ohio: Spielberg is from Cincinnati, Carpenter from Bowling Green, and many others. Chrissie Hynde is from Akron, and used to work for my dad back in the 70s, and Mark Mothersbaugh is an old friend of the family. I don't know, I guess Akron and/or Ohio in general breeds a lot of artists. I think it's always been a kind of lesser conservative and more bohemian kind of state.

CD: You're a fiercely independent artist, and it seems like your disillusionment with the movie industry was very prescient of the independent spirit that many directors are embracing today, enabled by the rise of YouTube and Internet video distribution. Do you think that this has changed things in terms of quality? Has it changed the way you operate? Would you have been wanted to do things differently if YouTube came along sooner? Is there such a thing as film making being TOO accessible?

DP: YouTube is great, but yes, it has changed things. It's all part and parcel of the inevitable trajectory things have moved in. In many ways YouTube has further lessened the value of films. In an age of over-saturated media, everywhere you turn YouTube is like the central hub for that, where everything and anything is immediately accessible in a few seconds and reduced to a flash clip. The further you go back in time the more special the value and identity and impact a film is and was and had. Fewer people were making them, the amount of time, work and devotion that went into making a film was so much more, and if you were a uniquely talented filmmaker, getting noticed from that had much more possibility and resonance. We're talking pre-oversaturated era, perhaps even pre-DVD, VHS and Beta era. The time we're in now was inevitable. Everything is lost in the noise, and "talent" (all subject to interpretation) means virtually nothing now. It's all about hype and marketing. People need to be told and influenced in what's good and bad, you can convince the masses in anything. It's all fine and dandy, I just wish I could have somehow carved out a niche in being able to make a living in it.

CD: What would you say to someone who has never seen your films? How would you introduce them to a new audience?

DP: Oh God, I don't know how to answer that. It may not relate to the question but I can say I probably have more fans than any broke and unfunded filmmaker who has ever lived. It's a miracle I've been able to accomplish anything, and certainly gets more and more difficult as the years pass.