A review of Night Catches Us. Grade: A 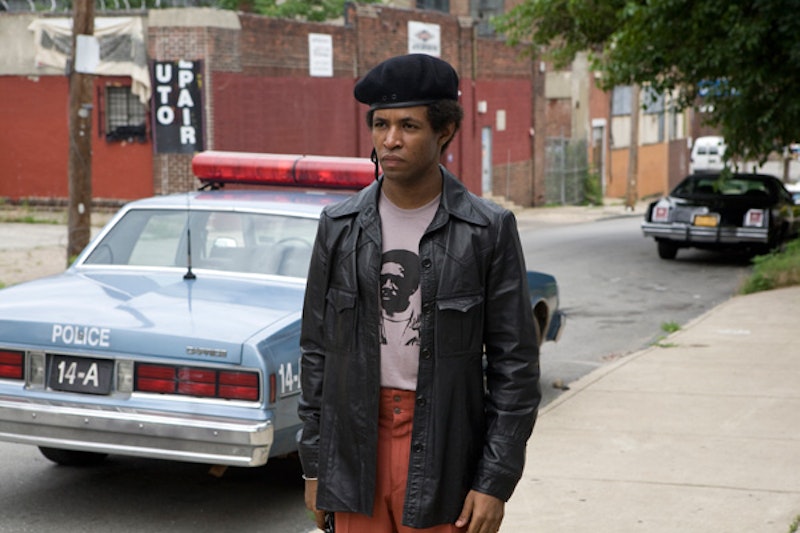 Some movies are just hard to make; their themes don't fit well with the medium. Gangsters, action, ghosts, sci-fi: easy. Activism, oppression, political movements: hard. Too often, those themes fall prey to nostalgia, condescension and moralism, all of which can be useful but are only sometimes interesting.

Night Catches Us dodges all the bullets. Night is the story of a group of Philadelphians in 1976 dealing with the collapse of the Black Panther Party and the continuing misconduct of the police. It refuses to mythologize the 1970s—without ignoring its mythology—and keeps the story intimate and subtle, with director Tanya Hamilton's handheld camera and deliberate pacing. In the end, Night Catches Us is an understated but highly intelligent film about what happens after the revolution, how those without much power or agency survive and make tough choices.

The film stars Kerry Washington—more on her later—as Patricia Wilson a lawyer and single mother. We first see her with a boyfriend of several years, a wealthier man who takes care of her, but with who she's clearly not in love. Elsewhere, Marcus Washington (Anthony Mackie) is returning to the city after four years in exile. He'd snitched on one of his Black Panther brothers, Patricia's baby-daddy, turning him into the Feds and ultimately leading to his death. Everyone is mad at him: his former comrade DoRight (Jamie Hector, in yet another gangster role) and his brother, Bostic (played by Tariq Trotter, proving how every movie about activism in Philly has to have a connection to The Roots, who also did the awesome soundtrack).

The story flows easily, but slowly. We gradually get small bits of information about the past. DoRight hasn't proved Marcus is a snitch; Patricia's past love was shot in her house, which she still lives in; Patricia used to go by "Patty" and cares for all the kids in the neighborhood; her precocious daughter knows very little about her father; and the former Black Panthers are allegedly selling guns to children. Throughout the film, the police harass members of the neighborhood. One such person is Patricia's cousin, Jimmy Dixon (Amari Cheatom), who is constantly calling the FBI “pigs,” an act of resistance, yes, but also straight from material printed by the FBI.

We eventually learn Marcus is not such a bad guy for leaving, Patricia is keeping a dark secret from everyone including her daughter, and all the while the police are trying to bring down the last of the anti-police militants in Philadelphia. The film artfully portrays the kinds of tactics the police used against black people—gang or otherwise—staying away flashy beatings and execution style killings and focusing on mundane harassment. The point is: you'd be militant too; the question is how you'd handle your anger. All these events foreshadow the MOVE bombing 10 years later, one of the biggest scars in Philadelphia's history.

Throughout the film, we get archival footage of protests and Panther rallies, set to seventies-era soul and some great music by The Roots. The images are from the past, but they haunt our protagonists. The wars of the previous years have left them with heavy personal challenges: disagreements to settle, relationships to resurrect and the continuing challenge of dealing with the police.

The acting is good, though hardly memorable. Kerry Washington, really the star, is competent as usual, neither ruining it nor contributing much. More so than the other top black actresses working today, Washington has the "dressing down" problem: her face is too beautiful, too well-rested to think its owner ever lost much sleep, as single mothers and underpaid lawyers are wont to do. This is a good role for Washington, but it's not a career-changer. Mackie is much warmer and vulnerable than usual; he has star potential. Wendell Pierce (The Wire, Treme) and Jamie Hector (The Wire) were typecast as a policeman and thug, respectively, but such is the biz.

Night Catches Us produces some beautiful moments, including powerful shots of Philadelphia's urban decay and a great scene of a street execution (by the police). The sets are modest—because its characters are not rich—but the film has an elegant feel, with historic homes and sumptuous vintage furniture from set decorator Daniel River Kersting.

The film ends with a bit of action, but not much—just a sneaking suspicion the violence won't end. Instead it leaves us to interpret the past and future. What do we do after a revolution? The end of the black radical activism in the 1970s really marked, for some, the end of an era, not just for black people but for an entire generation. There's a tendency to romanticize that time, but of course politics is about the process, which is long. So the people involved have to go on with their lives. Some will leave their communities. Some will stay and work on the little things: defending the wrongly accused, feeding children. Some will try to hold on to the glory days, perhaps not realizing times have changed. Either way, history moves forward. If nothing else, Night Catches Us, with a touch of poetry, shows us that.

Night Catches Us arrives on On Demand October 29 and in theaters December 3.