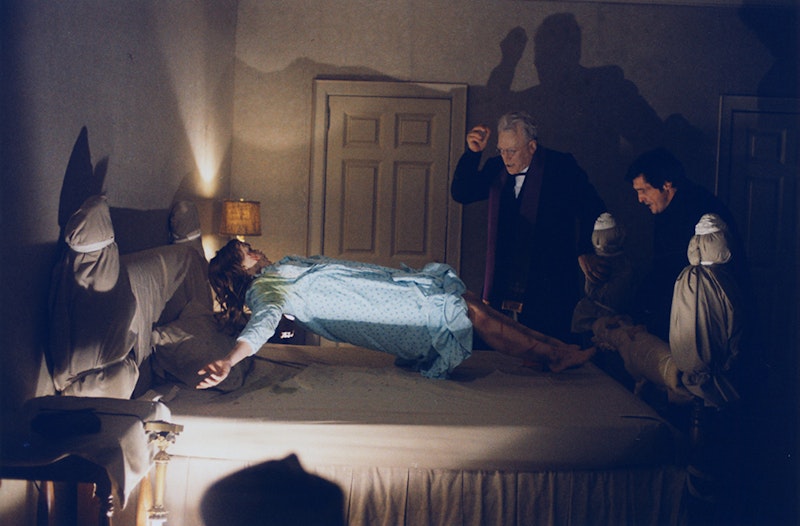 Halloween is a favorite holiday for some cinephiles, given the opportunity to count down the Scariest Movies of All Time. Finishing high on such lists, and regularly topping them, is William Friedkin’s 1973 version of The Exorcist.

The scene is repeated in one of the film’s still shocking scenes, with Regan smearing her vaginal blood on the face of her mother (played by the stalwart Ellen Burstyn) as the ever-quotable “Let Jesus fuck you!” pours from her mouth.

And all this is before the pea soup starts to flow.

If you haven’t seen the movie lately—if your memories are mostly of the distinctively-filmed battles between Regan’s possessor and the priests played by Max von Sydow and Jason Miller—a re-visitation is in order. The lengthy Iraq-set prologue, where von Sydow’s Father Merrin first encounters the demon he’ll fight years later; the uncomfortable sequences in the hospital, where Regan’s put through a battery of frightening tests; and, especially, Miller’s haunted performance as Father Karras, trying to deal with a world that makes little sense and the overwhelming guilt he feels over the death of his mother (something the demon will, of course, gleefully seize upon later) … all these carefully lay the groundwork too often skimmed over by the film’s many subsequent imitators, leading viewers to that dreaded confrontation upstairs.

Blatty has continued writing novels with religious themes that rarely go the full-on horror route. He’s also the director of a pair of extraordinarily odd movies, based on his own novels, that if not entirely satisfying are nonetheless worth a look.

The first, 1980’s The Ninth Configuration, shows a delirious visual sensibility and Blatty’s rare ability to combine comic absurdity with philosophical debates over identity, destiny, and of course good vs. evil. Is Marine Colonel Kane (Stacy Keach), sent to oversee the shellshocked Vietnam War soldiers in a psychiatric ward housed in a castle, actually crazier than the inmates?

The answer isn’t all that surprising, but the journey to it certainly is. The film’s most striking image is of an astronaut on the moon confronted by a nailed-to-the-cross Christ (it’s part of a dream, but still), but you’ve also got a production of Hamlet with an all-dog cast; a jaw-dropping barroom brawl that ends in several grisly deaths; and no small number of instantly quotable lines, most from inmate Captain Cutshaw (Scott Wilson), which range from “Infinite goodness is creating a being you know, in advance, is going to complain” to “If God existed, he's a fake. Or, more likely, a foot.”

Then there’s 1990’s Exorcist III, based upon Blatty’s novel Legion. Here, police Lt. Kinderman (the same uncomprehending character in The Exorcist played in ’73 by Lee J. Cobb and here by George C. Scott) is investigating a series of decapitations that seem to be the work of the Gemini Killer, put to death 15 years before, at roughly the same time as the climactic Exorcist death of Father Karras. Eventually the trail leads to a man being held in a Georgetown hospital’s psychiatric ward, alternately played by Brad Dourif and Miller; seems the demon that possessed Regan is out for revenge, and has revived the bodies of Gemini and Karras to carry out his dirty work.

It’s a complex plot, its philosophical dialogues often overrun by the twin casting and some butcher-styled editing undertaken by studio Morgan Creek (whose insistence that Legion be re-titled Exorcist III led to tacking on a subplot with a priest played by Nicol Williamson, as otherwise there’d be no exorcisms in Exorcist III).

Yet Blatty’s themes still play, there are some genuine shocks that survive, and of course some arresting visuals: A crucified Jesus icon’s eyes open; an old lady skitters around on a ceiling, unseen by the room’s other occupants; and C. Everett Koop and a youngish Larry King can be spied dining at The Tombs, to give the film a little cinematic verisimilitude.

The crowning nutso achievement is Kinderman’s vision of heaven as Grand Central Station staffed with angels. Wandering through, Kinderman finds several of the Gemini’s victims (heads now helpfully sewn back on), as well as such imposing physical specimens as Fabio and former Georgetown University player Patrick Ewing (credited, in a neat foreshadowing of the Knicks’ playoff chances with him at center, as “Angel of Death”).

That Blatty, now 82, will almost certainly never direct another movie remains a minor crime. That his new novel, Crazy, arrives on Nov. 9 proves that there’s creative life in the old Jesuit yet.