Romero & Co. would be proud. 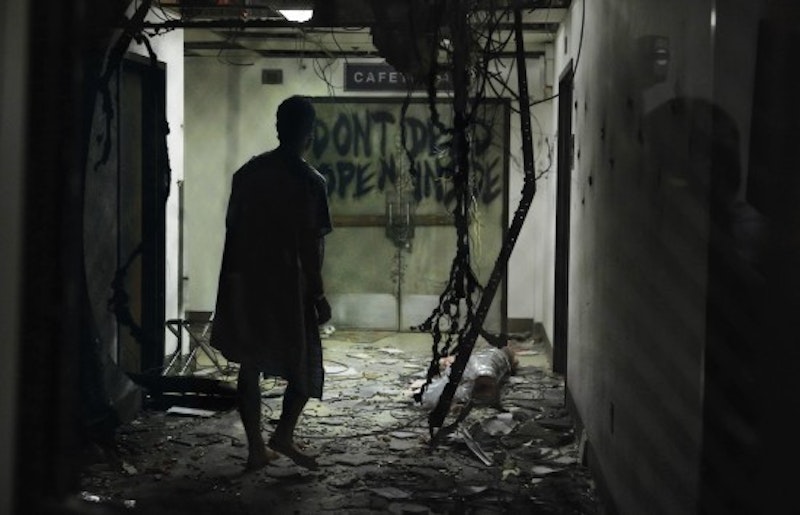 “When there’s no more room in hell,” promised the tagline of the original Dawn of the Dead, “the dead will walk the earth.” Little could zombie-meister George Romero have guessed that a couple of decades later, the undead would not only regularly be walking the streets in cinemas, but actually shambling along on TV screens too.

AMC, which has been on an original programming tear, debuted its latest series, The Walking Dead, last night at 10 p.m. EST. Based on Robert Kirkman’s well-regarded comic book, the show tracks policeman Rick Grimes, who, after an unknown length of time convalescing from a gunshot wound, awakens to find the world overrun by “walkers,” in the show’s parlance.

Grimes, played by Andrew Lincoln, quickly brings himself up to speed and heads off to Atlanta, which is supposedly a safe haven due to its being the headquarters for the Centers for Disease Control and Prevention, hoping to find his missing wife Lori and son Carl alive and well. A parallel storyline finds that the pair have banded together with a small group of survivors that includes Shane Walsh (Jon Bernthal), Grimes’ former partner who’s now apparently intimately involved with Lori.

One of the show’s presumed strengths is the open-endedness of its structure; unlike most zombie movies, there’s no particular end in sight (the cavalry arriving to save the day, as in the original Night of the Living Dead; a “cure” being found, a la Shaun of the Dead; or a small band of survivors moving off into the sunset, as happens in most others). This approach allows for character development in a way that Romero and company could never afford, not only with Grimes coming to grips with a world turned upside down, but also with incidental characters he meets along the way, such as the grieving father and son who can’t quite bring themselves to blow the head off of their undead wife/mother, still roaming the street outside their refuge.

As with most works in the zombie field, the only way of stopping the revivified creatures is by destroying their brains, done most efficiently with a gunshot to the head. Thus The Walking Dead still gets to trade in plenty of splatterific effects, strong for cable TV but nothing new to fans of the genre. (The pilot episode opens at an unspecified time in the zombie-overrun future, wherein Grimes must put down a preteen, bunny-slippered girl in an unblinkingly graphic fashion, serving notice that this definitely ain’t Mad Men.)

Most of the usual zombie rules apply: The undead move at a lethargic pace; their only apparent sustenance is living flesh (but can a “dead” person actually take in nutrients?); and, of course, there may ultimately be no way of stopping them. The show throws in a few intriguing curveballs: The undead have an acute sense of hearing, so use your gunfire judiciously, and “living flesh” need not be restricted to people, as one unfortunate horse finds out. (Effects are still not up to an army of zombie animals and insects joining in the ravenous horde, though that’s got to be the next step in the genre’s development; just don’t tell M. Night Shyamalan.)

Beyond Romero’s Living Dead films, the key influence here seems to be 28 Days Later. There’s the waking-up-in-the-hospital bit, the distinct (yet, so far, mostly background) presence of the military, and the discovery that the promised safe haven (in this case, Atlanta) isn’t all it’s cracked up to be.

As Grimes, the British-born Lincoln (most familiar from Love Actually, and whose wedding included Apple Paltrow-Martin as flower girl) succeeds with the American accent, although the pain of not knowing his family’s fate has yet to be fully explored. That the series is produced, and the first episode directed, by Frank Darabont (The Shawshank Redemption, The Green Mile, The Mist) is some cause for concern, but based on the pilot and the inclusion in the cast of strong supporting actors like Jeffrey DeMunn (a Darabont regular) and Michael Rooker (forever best known as the titular Henry: Portrait of a Serial Killer)—as well as the source material—The Walking Dead has the potential of living up to the AMC-driven hype, and then some.

The series has just six episodes, during which time Grimes will undoubtedly find his family and have to deal with the bond they’re made with his former partner. All, of course, while battling an inexhaustible supply of zombies. Seeing how this universe plays itself out should be one of the more enjoyable viewing experiences of the next couple of months.