Clint Eastwood and the Chair 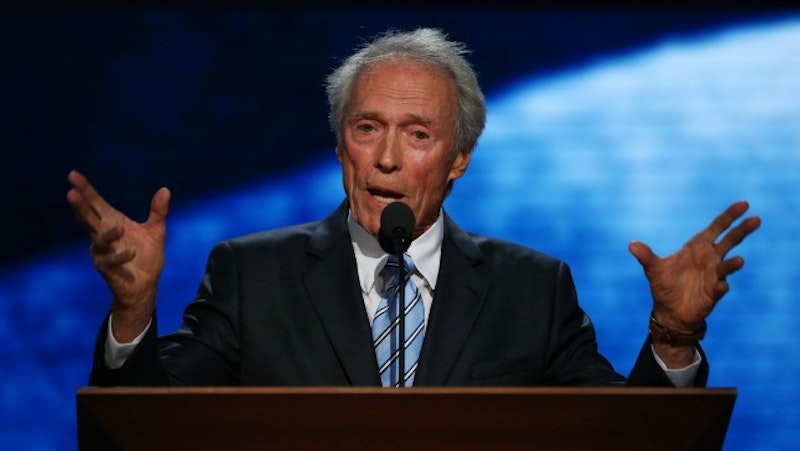 Admittedly the moment did not come off. Clint Eastwood projected a general sense of unmoored dentures. Out of everyone on stage all night, only he had messy hair—the movie star, the very old movie star. He quavered, and then came moments when quavering would have been a step up: “And they were saying, uh, uh, it, you know, and then, uh, uh, I just, I just thought, 'This is great.'” Press notices have mentioned listening to an old relative lose his way in a story. The fear, I guess, is that Eastwood is senile and Tampa is our first clue.

What people have focused on is Eastwood's decision to build his talk around a chair. Candidates pull this stunt when an opponent won't debate them. They go on stage and address a chair as “Supervisor Rothman,” or whatever, and score their points while their cowardly opponent stays away. Barack Obama, as a Democrat, is not supposed to be at the Republican convention, so the idea of cowardice gets yanked out of the arrangement. Even so. Eastwood is an actor and he can get creative with props if he wants to. Who's saying he couldn't spin out a nice 10 minutes of sticking it to an imaginary Obama?

The people in the hall seemed to like it, as much as they liked anything that night—look at Rubio, there's someone who really fell flat (that porcelain pig of a pseudo Boy Scout). News accounts are pitching the story as if Eastwood wet himself or fell into a bizarre public fit like that of Jack Palance, a craggy old Western actor who melted down at the 1992 Oscars and started doing one-armed pushups on stage. But the business with the chair was all Eastwood had by way of a fit, and it doesn't do the job. Nor did Eastwood come out with any off-the-wall remarks. Politico tried its best and highlighted “absolutely crazy,” a term flung by Eastwood at his imaginary Obama. But Eastwood used the phrase when imaginary Obama wanted him to get cheeky with Mitt. “You’re crazy, you’re absolutely crazy,” Eastwood said. “You’re getting as bad as Biden.” All was fun and games. Eastwood followed the line with this description of Biden: “Kind of a grin with a body behind it.” Somebody had to be functioning pretty well to come up with that.

I don't mean the press wants to nail Eastwood. They just have trouble translating all the events that humans may get up to. There was something wrong on stage, and the press is just looking for a way to get it into words. “Rambling” may be the term of art that finally lands on the Eastwood incident. The term is not dead on, since his talk proceeded along a more or less clear track of joke, jab, applause line, etc. But he sure seemed to have trouble getting the words out of his mouth. “I just think that, uh, it's important that you realize, eh, that, uh, you're the best in the world.” His steel-gray hair was puffed above his head, his torso looked like a tilted landscape, and his head seemed to fight sliding forward. His back collar opened way too big a space between itself and his shoulders. He's gone from weathered to old, really old.

Let's say Eastwood had snapped out his performance, unfurled his lines and rode over any audience doubts about the use of props to represent absent chief executives. I still think this Tweet by Jamelle Bouie, a liberal journalist, would sum up the incident: “This is a perfect representation of the campaign: an old white man arguing with an imaginary Barack Obama.” The Eastwood skit represented a sort of playtime, a fantasy moment when the people who ought to be big could treat invisible Obama to some taking down of notches. “And I think, if you just step aside, and Mr. Romney can kind of take over,” Eastwood told the not-there president negligently. “You can maybe still use a plane.” At another moment: “And I thought, I  thought, yeah. [Suddenly, to the chair.] I am not going to shut up, it is my turn.”

From this point of view, the fact that the skit did all right with the hall may be the most disturbing item before us. It's one thing to talk to furniture and bounce off campaign zingers. It's another to enjoy watching someone talk to furniture because that way, at last, you and he can pretend to be Big Man. It's too much like bossing around dolls. I remember the two woman reporters I knew who put hands on hips and gave what-for to a swivel chair that stood in for their mean boss. It seemed kind of silly and girlish, and now we have Clint Eastwood and hundreds of Republican delegates taking up the practice.

This isn't a matter of decayed brain cells, though. It's a matter of decayed spirit. Those rugged old white people of the GOP—everything was theirs for so long, and now some of it ain't and they will never settle down to that fact. In the meantime, the furniture had better look out.