In Mirror, Mirror, Julia Roberts Finally Gets A Good Role

The evil queen desperately tries to hold onto youth. 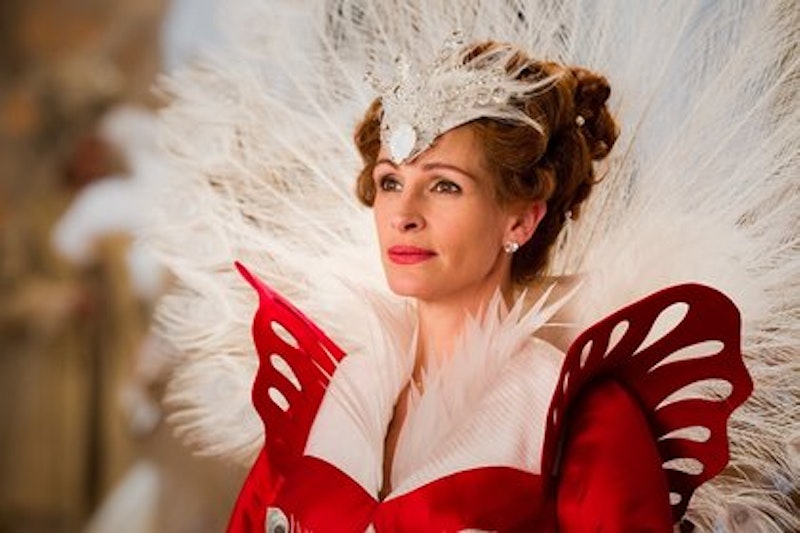 "It's important to know when you're beaten, yes?" Lilly Collins sneers at Julia Roberts at the end of Tarsem Singh's Mirror, Mirror. In theory, Collins is playing Snow White and Roberts the Evil Queen, but it's hard not to read the line as the triumphant coup de grace of the next young thing celebrating the departure of the past-it has-been. Roberts, wrinkled and decrepit, duly retreats into her cloak, admits regretfully that "it was Snow White's story all along" and disappears. Meanwhile, Snow White gets to perform a Bollywoodesque dance of triumph.

The victory is decisive, but Pyrrhic. As Elizabeth Greenwood points out in an excellent review at the Atlantic, "In any Snow White, the Queen is the real reason we watch." Collins' Snow is granted girl power spunkiness and several scenes of swashbuckling swordplay, but that can't really obscure the fact that she's a dull goody-goody nonentity—a very pretty face signifying the same bland goodness that a very pretty face always signifies.

Julia Roberts as the evil queen, on the other hand, has outgrown both the goodness and the blandness, and she seems sincerely, exuberantly relieved. No more does she have to simper and smile and charm as the plot whisks her efficiently towards some repulsive doofus like Richard Gere. Instead, she gets to leer at the bare chest of a young if doltish Prince, Armie Hammer ("so hairy" she absent-mindedly rhapsodizes). She indulges in rampant and elaborate bitchiness (commanding her long-suffering aged servant to imitate Snow White's whining complaints). She behaves like a woman mature enough to really enjoy her own unpleasantness. When she is riding off to marry the Prince (her fifth wedding), she breaks into that amazing Julia Roberts smile, and muses, "No matter how many times I do this, I always get excited at my wedding day." The apparently genuine delight in cynical artificiality virtually rewrites her whole oeuvre: how many times, after all, has Roberts been married onscreen (and off?) Suddenly, we can see her not as a chit moved about by the nauseatingly saccharine repetition of rom-coms, but as the manipulator of that repetition. Which makes her, not nauseatingly saccharine, but self-aware—and funny.

Now, aging isn't all good. Mirror, Mirror shows the evil queen desperately trying to hold onto her youth, whether by using the magic of her mirror, spreading bird poop on her face, or cinching herself into her dress with the aid of an elaborate mechanical crank. But even these efforts are transformed by Roberts' performance into occasions for barely contained malevolent joy. When, after much tightening, groaning, and muscle power, she finally gets into her undergarments, she declares, "Ha!  I knew I was the same size!" All the effort to imitate youth comes across as more satisfying, in its way, than youth itself. The evil queen appreciates her own beauty more than Snow White appreciates hers. After all, Snow White doesn't have to work at it.

In her review, Greenwood points out that, though there are more roles for older actresses in Hollywood than there used to be, "the role of the young love interest still earns more for an actress in dollars and red-carpet caché." When Snow White hands the poisoned apple back to the Queen at the film's close and cruelly quips, "Age before beauty," it's a sneeringly sarcastic inversion of Hollywood's pecking order.

Yet at the same time the film shows quite clearly that, in some sense, age really does come before beauty. If Julia Roberts has ever had a better role, I sure haven't seen it. Freed from the responsibility of marrying the boring Prince and living happily ever after, she is finally able to embrace her comedy, anger, self-indulgence, and intelligence. I’d say that the evil queen was the role Roberts was born to play, except that it would be more accurate to say it was the role she got old to play. In this context, Snow White's final outburst of uncharacteristic vindictiveness has an almost wistful edge to it. In telling the evil queen off, she manages, for just a second, to be as interesting and enjoyable a character as her step-mother. Perhaps, if Collins is lucky and stays around Hollywood, in 20 or 30 years she can get a part as rewarding as the evil queen. Till then, she has a lot of dreary sweet young things ahead of her. As Roberts must know, with some regret and some triumph, beauty comes before age.