Star Trek: Beyond and the end of history. 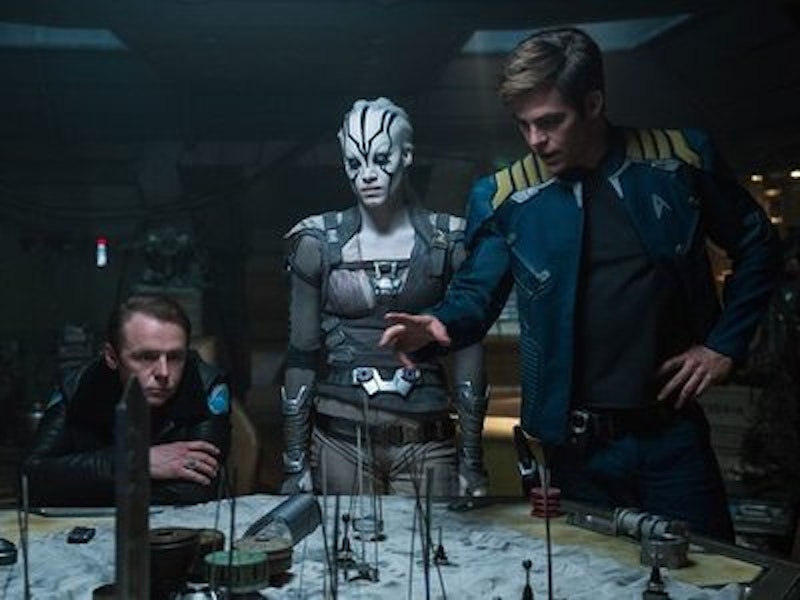 In Star Trek: Beyond, when the villain Krall demands that his Federation captives surrender the missing piece of his superweapon, a Federated nonhuman named Sil unfolds her head (which is formed like two clasped hands) and reveals that the artifact has been right under Krall's nose all along. Krall inserts the artifact into a large wheel, which then emits a poisonous cloud that engulfs and disintegrates Sil.

What kills Sil is a dangerous idea, one that embeds itself in her head and then (with Krall's help) consumes her. It’s not a sexy, radical idea, but a melancholy and complacent one: the idea that history’s coming to an end. It's there from the beginning of the film, when James T. Kirk sighs that things are beginning to feel "episodic," and contemplates ending his career on the frontiers of space. What Kirk says next about outer space is daunting and romantic: "If the universe is truly endless, are we not striving for something forever out of reach?" Meanwhile, the universe he knows is getting smaller all the time. The Federation is everywhere and faces no significant threats. A new, pristine space station ("Yorktown") has just been debuted to avoid any signs of Federation favoritism. Even the aliens are getting smaller: what at first appears to be a dangerous, gorilla-like animal charging an unarmed Kirk turns out to be a mere nuisance, no bigger than a terrier.

Space, in Star Trek, always maps quite easily onto America, with the same diverse population, democratic ideals, and receding frontiers. If Star Trek: Into Darkness gave us a futuristic version of the George W. Bush years, with Khan playing the role of Osama bin Laden, then Star Trek: Beyond is set in Barack Obama's post-recession America, with bin Laden already in the bag. ISIS notwithstanding, this is America at its most secure and self-satisfied, a beacon of freedom and equality to the rest of the world.

Yet this is not happiness; it is an anticlimax. What is really left to do, in such an enlightened nation—or, in Kirk's case, such an enlightened galaxy—for men like him, men of action? The scene is akin to what Francis Fukuyama describes in his famous essay "The End of History?" as the "homogenous state," a term coined by philosopher Alexander Kojève: "For Kojève, this so-called 'universal homogenous state' found real-life embodiment in the countries of postwar Western Europe—precisely those flabby, prosperous, self-satisfied, inward-looking, weak-willed states whose grandest project was nothing more heroic than the creation of the Common Market." Krall, for his part, certainly agrees that the Federation has become, in Fukuyama's words, "flabby" and "weak-willed." "Your unity is your weakness," he sneers, taunting Mr. Sulu and Lt. Uhura.

Fortunately, there is one rocky, uncharted nebula left to explore. What do Kirk and his crew, piloting the most advanced ship in the galaxy, find there? Krall, an old pale vampire whose face is completely covered in lobe-sized wrinkles; a dangerous swarm of bee-like starfighters that tear the U.S.S. Enterprise to shreds; and Jaylah, a white and black woman who listens to Public Enemy. In short, they tumble headlong onto Altamid, a racially charged planet where the air is breathable, the climate is mild, and most people speak English. Welcome to the America we found ourselves inhabiting after the death of Trayvon Martin.

This is an America that can be torn apart, quite effectively, by racial conflict. Spock reports that the Enterprise's "advanced" weaponry cannot repel the "bees" Krall has at his command, and if Krall manages to capture Yorktown, then he may be able to inflict untold damage on the entire Federation. Krall's ships sever the Enterprise's command center from its engines, forcing the crash landing. This foreshadows the haunting moment later when Balthazar Edison, the black captain of the marooned U.S.S. Franklin, stares into his webcam and bitterly declares, "the Federation does not care about us." Edison is echoing Kanye West's angry statement about the U.S. government's response to Hurricane Katrina: "Bush doesn't care about black people." The film's big reveal is that the "aliens" on Altamid are not really aliens at all, but the Federation's own dispossessed, forced to live on a planet others stocked with worker drones, then abandoned. Balthazar Edison, it turns out, is Krall; he’s been keeping himself alive by sucking the life out of other humanoids.

This casts a darker light on the film's preoccupation with history. The crash of the U.S.S. Franklin is not part of the Federation's triumphant autobiography: Edison is labeled a hero and swept under the rug. The obvious parallel with America's own racial scars and whitewashed history makes us re-think the "amicable" split between Spock and Uhura; before the film begins, Uhura has broken off her relationship with Spock because he’s paralyzed by a sense of racial duty (i.e., he thinks he needs to marry a Vulcan and help re-populate "New Vulcan"). At its worst, the film appears to settle for an obvious battle between progress—the Federation as Spock's interracial romance with Uhura, writ large—and the terroristic atavism of a man like Balthazar Edison, who wants the frontier to "push back" against peace. Everybody has to just move on in the name of progress: both Kirk and Jaylah have to get over their fathers' deaths, Spock has to get over losing Vulcan, Edison has to stop resenting the Federation... even the tiny terrier/gorillas have to get over their adorable little racial feud, and do so by the end of the film. Viewed this way, history is a threat the Federation must expel, sending it out an airlock along with Edison and his "abronath."

Edison's death is a tragedy, and the Federation is responsible—not because they didn't rescue him, which might’ve been impossible, but because they won't publicly admit what happened. The reason they won't admit to losing Edison is more complicated than just maintaining a good image. Edison's whereabouts are unknown, and the tolerant utopia of the Federation cannot tolerate the unknown. The unknown threatens the stability of its historical narratives. To the Federation, history must be a fixed quantity, such that every political lesson has already been learned, every evil transcended. If history is just something to be "moved on" from, once its lessons are counted up and learned, then it has no real existence in the present. Stable history is the same as none at all. That is why the Federation's masterpiece is Yorktown, the completely artificial planet where no one has ever been massacred or enslaved.

Fukuyama would love Yorktown. According to him, Hegel was right to believe that history ended in 1806. Everything that needed to be said was already on the books, thanks to the Enlightenment, the French Revolution, and the American Revolution. Such steps as "abolishing slavery and the slave trade, extending [equal rights] to workers, women, blacks, and other racial minorities, etc." were just details. A more complicated, alternative view is that the unchanging language of a political document like the United States Constitution is misleading. The nature of Western democracy, in the present, is bound up with histories that must be continually excavated, revisited, and revised. If black men and women become emancipated, the meaning of freedom for all citizens undergoes a corresponding change; until then, the freedoms of the white citizenry are actually founded upon the subjugation of slaves.

Through the character of Spock, Star Trek: Beyond tries to decide which side it is really on. Is Yorktown a utopia, or not? Is history a threat to democracy, or one of its most important frontiers? When Spock has a sudden epiphany about the history of the abronath weapon, the life-threatening wound in his side acts up, and he faints. When he’s telling Kirk about the abronath, as soon as he begins recounting its history, he nearly faints again. Bones wants to sideline him, but Spock insists, "I am functioning adequately." Spock is right, because the atrocities in his history are wounds that he can survive if he does not ignore them, even if they never fully heal. He finds his way back to Uhura thanks to a stone preserved from his annihilated planet Vulcan. Consider what is hiding out on Altamid: not just Krall and his legions, but the U.S.S. Franklin, named after a Founding Father who was also the head of the Pennsylvania Abolitionist Society. When Kirk discovers a motorcycle inside the ship, he asks, "Was this here the whole time, and nobody noticed?" In fact, Jaylah and the Franklin have been there all along, unnoticed, because of the Federation cover-up, and they hold the keys to defeating Krall's invasion.

Krall is a white villain who has consumed the black body of Edison and countless others in order to live. Here I am separating Krall from Edison, because what really consumes Edison is the idea, itself, that the Federation is—in its decadent, contemptible way—absolutely perfect, an idea coeval with the Federation's blindness and mistakes. If the state is perfect, it cannot be improved. It can only be destroyed by an exile who has bought into its rhetoric and cannot understand his exile any more than the Federation understands the abronath. When Krall begins to appear "normal" again, after consuming even more bodies, he makes us wonder how many planets and populations pay for Yorktown's immaculate prosperity.

Of course the aim of history is the completion of history, and the goal of political science is the perfection of politics, but it’s possible to live with the idea that the final frontier is never exhausted, in part because it extends back far into the past—the past, that distant, changeable light that is never finished reaching us. Consider Edison's namesake, a man who destroyed Nikola Tesla and (in the long run) held back the progress of electronic technology as much as he advanced it. That is how we remember Edison now, but once upon a time, he was called a hero. Or consider Chekhov's bold assertion that "Scotch was actually invented by a little old lady in Russia," which explains why he has a bottle of it in his locker, instead of Russian vodka. History in Star Trek: Beyond is constantly being re-written. When Uhura keeps rewinding the surveillance video that first reveals Edison on camera, she hears the word "frontier" repeated over and over, until she finally realizes something new about her captor that would have seemed impossible before.

Krall's minions are brought down by the discordance of the Beastie Boys song "Sabotage," which features white men rapping over a mixture of hip-hop and punk, two kinds of music made from wounds that don't heal. It is old music, "classical music" as the film jokes, but we’re still not finished listening to it. "Striving for something forever out of reach" is what Kirk does best. He is not bringing democracy with him, to strange new worlds, nor is he bringing peace. He is striving for them.