Who’s the audience for A Monster Calls, a stealth cancer movie? 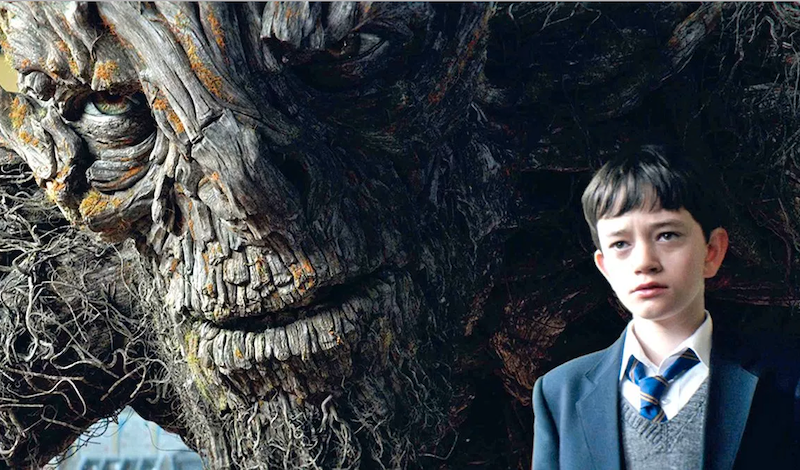 There's a long tradition of misleading advertising in American movies. Most recently we saw this with Collateral Beauty, a deliriously enjoyable train wreck of a movie that looked merely self-serious and corny in trailers full of Apple-inspired aesthetic and severely stepped on values stripped from American Beauty, Love Actually, and It’s a Wonderful Life. Will Smith looks silly doing just about anything, whether it’s cosplaying in Suicide Squad or summoning the worst attempt at a Nigerian accent ever in Concussion. But this was something else: I expected an unintentionally hilarious masterpiece on the level of The Happening or Knowing or the 2006 remake of The Wicker Man. The beautiful people—Smith, Edward Norton, Helen Mirren, Kate Winslet, and Michael Peña—doing their best to save face while wandering through a miserable script full of “deep, dude” moments of fake insight and inflatable platitudes. Who knew the whole movie hinged on a bunch of cynical businessmen and women taking advantage of a grief-stricken man and attempting to make him look mentally ill to himself and potential investors. It’s totally diabolical and absolutely mad, a disgrace that this guy Allan Loeb, writer of Kevin James movies, gets to puff out his chest and act like a serious artist, just for one day (and $60 million).

But it was a delight, if not quite as magnificently stupid as The Happening or any of M. Night Shyamalan’s later works. More curious, and certainly more upsetting, is A Monster Calls, out now and advertised as an alternative to Fantastic Beasts and Where to Find Them and Miss Peregrine's Home for Peculiar Children or whatever they’re called—at least this one keeps the title brief. I expected to nod off once the giant tree monster (voiced by Liam Neeson) first appeared, bursting out of the ground and beckoning wide-eyed British schoolboy Conor O’Malley (played by Lewis MacDougall) to come and hear three stories, cautionary tales that all tease some kind of epic Lord of the Rings-esque turn this will all take, but end up spiraling back into common grief, and the meaningless of losing those we love. At first I was relieved we weren’t spending that much time in fantasy land, but Conor’s reality is pretty well fucked: his parents, still in their 20s, are divorced, his father lives in the States, his shrew of a grandmother (Sigourney Weaver) won’t let him put his “rucksack” anywhere but its designated chair, and his mother—his poor mother—well, she’s dying of cancer, and not even the tree can save her.

What the fuck? A Monster Calls is a much better movie than I expected, but I refused to engage with a stealth cancer movie, especially one this bleak. Spare yourself: there’s crying and handholding and a miserable “letting go” sequence at the end that will make anyone sob, even those lucky enough not to have been affected by cancer. But my main takeaway—who is the audience for this movie? Young British kids with mums dying of cancer at home? It’s still too light and whimsical for any adult appeal, and if it freaked me out, I’m sure it’ll spend a month or so traumatizing kids across the country. Who is the audience for this movie? Tread lightly and don’t get hit with surprise cancer stories!