On Live By Night. 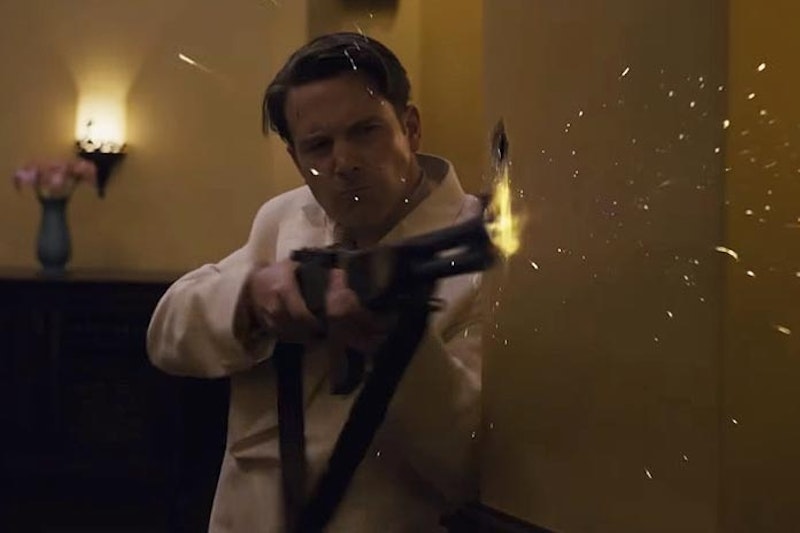 Live By Night, Ben Affleck’s fourth film as a director, is one of those movies that bit off way more than it could chew. It’s an odd, disjointed, ultimately unsuccessful gangster film, which shifts wildly in style and tone, and borrows both major thematic elements and entire scenes from other, better movies.

Affleck’s comeback began with his directing of 2007’s Gone Baby Gone, an adaptation of a Dennis Lehane novel set in Boston, and he goes back to that well again here, in a clear attempt to create an epic that makes a bold, ambitious statement about crime, history, and America itself. It falls short. Live by Night contains about twice as many characters and three times as much plot as what fits within its running time. The film stars Affleck as Joe Coughlin, a recently returned World War I veteran in 1920s Boston.

Even though he’s the son of a decorated cop (Brendan Gleeson), Coughlin is a small-time robber who, in a Yojimbo riff, gets caught up in a war between rival gangsters (one Irish, one Italian), while carrying on with one of their mistresses (Sienna Miller). The overarching narrative drive is that Joe doesn't want to be a “gangster,” although we never really see him as anything but.

The first act, set in Boston, is dour, slow, and dull, but the film picks up in its second (and best) act, as the plot moves to central Florida and Affleck sets himself up as the area’s Prohibition-era rum kingpin, along with his sidekick (Chris Messina). He also gets together with the daughter of the Cuban connection (Zoe Saldana), and does battle with local Klansmen, the sheriff (Chris Cooper), and the sheriff’s junkie-turned-evangelist daughter (Elle Fanning).

The third act, meanwhile, brings together all previous plot strands for a lackluster shootout, before sliding into a never-ending ending that cribs whole scenes from both American Beauty and The Godfather, Part II. Affleck clearly knows how to direct; he made the almost entirely successful Argo, and while Gone Baby Gone and The Town were both significantly flawed, they were the kind of films that were made by a guy who knew what he was doing.

Live by Night, despite a consistently strong and inventive visual style, especially in the Florida portion, is a mess. It has no point of view, slapping together multiple heavy subjects (crime, religion, racism) without having anything to say. It’s yet another crime film that tries to borrow unearned gravitas by occasionally, halfheartedly gesturing towards Catholic iconography and talking about sin. Road to Perdition (2002) is a much better version of this movie, as is most of the run of Boardwalk Empire.

Affleck isn’t exactly bad, but the character as written is simultaneously boring and scattered. It’s yet another Affleck vehicle in which he plays a criminal and killer who’s at heart a nice guy. At least this one skips the weightlifting close-ups that seemed to have taken up about 25 percent of The Town’s running time.

But the film does a disservice to its female characters. Saldana’s character is a complete cipher, while Fanning’s is just plain weird. And while Sienna Miller is a talented actress—her work in American Sniper was one of the stronger aspects of that film—movie performances don’t get much worse than Miller’s in this movie. It also doesn’t help that both Affleck and Miller seem about 15 years too old for their roles.

The huge cast does sport a handful of very good small performances. Brendan Gleeson disappears early, but I could watch him play a conflicted old Irishman all day, while Cooper does outstanding work as a grieving father. Messina is quite a sight as Affleck’s sidekick, having gained a mustache and what looks like 40 pounds. Matthew Maher seems to have stepped out of the cast of Justified as a dimwitted Klansman. And Max Casella, coming off a scene-stealing role as Jack Valenti in Jackie, sinks his teeth into a juicy part as a mob boss’ idiot son.

But that can't make up for everything else that goes wrong. Ben Affleck has directed one great movie before and will probably do so again. But Live by Night is significantly wide of the mark.