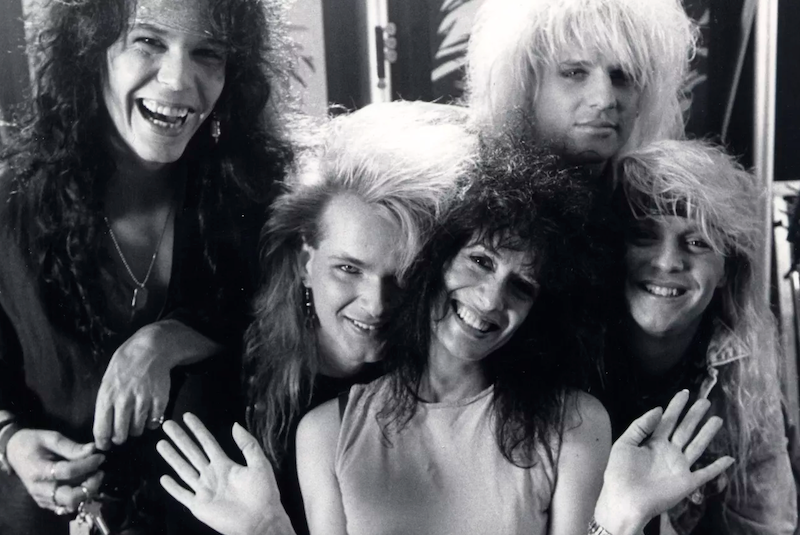 "I've probably hit a lot of girls in the face. I don't like girls much," a young man with an X carved into his hair explains in The Decline of Western Civilization  (1981). The forthright statement of misogyny seems broadly in line with the ethos of the LA punk scene that the film documents. Bands and fans are united in a hyped-up celebration of testosterone, aggression, swagger, and violence. In the final performance of the film, Fear's Lee Ving baits the crowd with homophobic slurs; "Are there any queers out there?" he bellows shirtless (male shirtlessness being the standard homoerotic punk outfit). A woman climbs out of the audience up on stage and hurls herself towards the singer. It's unclear whether she's attacking or goofing around. In any case, Ving responds by… hitting her in the face.

The LA punks said they wanted to hurt women, and then they’re filmed hitting women. That’s a pretty open-and-shut case that the LA punk scene was misogynist and unwelcoming to women. And yet, the director of The Decline of Western Civilization was a woman. Penelope Spheeris got unusual access to the bands and the fans, because she was an LA punk herself. "I was a part of the scene, I wasn't a professional. So get that shit out of your head," she said at a speaking engagement in 2015.

Generally, artists don't boast about their lack of professionalism. But punk made a fetish of DIY, de-skilling, and scrappiness. When Spheeris interviews Black Flag in their home—a converted church—singer Ron Reyes shows off the closet where he sleeps in a cheerful display of reverse snobbery. The band is so poor, he declares, that they "have to find rich girls" to pay their expenses. As he says that, Spheeris cuts to a shot of the fishnet clad legs of a nameless woman hanging out in the background.

Conflating women with the upper class as a justification for dehumanizing them is a tried and true form of lower class misogyny. But while the skuzzy low-fi aesthetic of punk can be weaponized to denigrate women, it also opens up opportunities. With punk there weren't many barriers to entry—which meant that the scene was surprisingly diverse, in many ways.

Reviews and discussions of The Decline of Western Civilization tend to lump all the bands into a single, sloppy, noisy style. From this perspective, The Germs, led by Darby Crash, are the iconic act of the film. Crash has serious drug problems—he died shortly before the film was released—and the Germs can barely play their instruments. Their sets are a shambolic mess, with Crash lurching about the stage, falling down drunk, begging audience members to give him beer, and letting people come up on stage to draw on his skin as he mumbles and shrieks his way through impressionistic, fragmented lyrics. In their backstage interview, Darby plays with a tarantula while drummer Michelle Baer babbles about finding a dead body and having her picture taken with it. Manager Nicole Panter, with some affection and some exasperation, characterizes the band as a bunch of three-year-olds.

Riveting as the Germs are, they're not especially representative. Black Flag, for example, is a lot more together, and more explicitly political. Similarly Fear, for all their asshole aggression, can actually play their instruments. In fact, their songs are constantly on the verge of sprouting standard classic rock blues licks, while Ving's singing teeters on the border of R&B parody and heartfelt R&B homage. Critic-turned-singer Claude Bessy, for his part, delivers Dylanesque lyrics in an affected vocal style; his sneers at New Wave seem like a case of anxiety of influence. The most famous LA band in the film, X, is noisy and raw, but also very skilled—Billy Zoom is a fabulous rockabilly style guitarist, and John Doe and Exene Cervenka write songs with harmonies and parts. Exene gushes backstage about how their venue sent them flowers because they bring in so much business. They have attitude and engage in recreational drug use—but so did the Beatles.

Punk, then, had room for a range of performance styles, and a range of performers—from the Puerto Rican Reyes to Cervenka to Latina women like Alice Bag. One woman fan who Spheeris interviews speaks lyrically about the awesomeness of blue hair and how the scene is accepting of difference, intercut with other punks using racist epithets.

The woman isn't deluded; punk really did have space for diversity. It's just those different people included asshole racists and misogynists. Low barriers to entry are a curse in many ways, as you can tell from reading any un-moderated comments section. But they can also be liberating, or at least democratizing. You don't need to be able to play an instrument to get onstage; you don't necessarily need to be white or male either. Everyone can perform, sexists and women alike.

This helps explain why a scene which was, in many respects, hostile to women ended up being documented by a female filmmaker. Women directors are so rare in film history in part because films are so expensive to create. Directors need investors and massive institutional support. They need lots of white male bankers to believe in them. Gentile sexists don't talk about hitting women in the face; they just don't give them funding.

Punk, though, says you don't need bankers to make art. Spheeris had relationships with bands and with fans; she had friends, she had a vision. The Decline of Western Civilization is a punk document not just because it chronicles punk bands, but because it’s made in line with that famous punk ethos: the mainstream sucks, do it yourself. Riot grrrl wasn't around quite yet, but women like Spheeris knew early that punk didn't have to belong to misogynists alone.