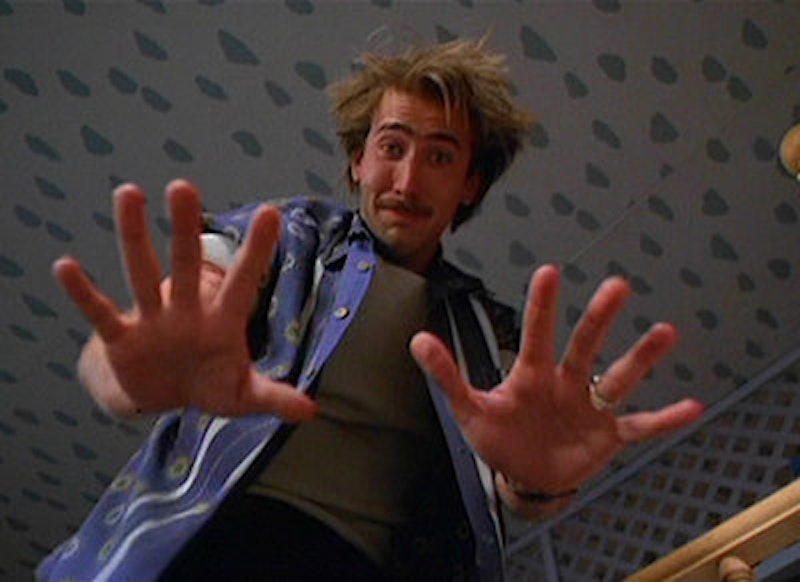 This is part of a series on 1980s comedies. The last entry, on My Neighbor, Totoro, is here.

Like Beetlejuice, which followed it by a year, Raising Arizona (1988), is an unconventional film that celebrates conventionality. The Coen Brothers' effort, though, leaves less of a sour aftertaste than Tim Burton's, perhaps in part because it’s less convinced by its own picture of domestic bliss. Beetlejuice has outright fantasy elements in its ghosts and monsters, but Raising Arizona blurs the line between fantasy and reality with greater assurance. As a result its moral world is less proscriptive and more aspirational—even if the aspirations are, in context, oddly unambitious.

The film's plot is familiar; a con with a heart of gold tries to go straight with the love of a good woman. H.I. McDunnough (Nicolas Cage) is a recidivist convenience store robber who falls for Ed (Holly Hunter) the police mugshot photographer who he keeps chatting with in booking. The two marry and Hi gets a blue-collar job punching holes in sheet metal. They’re desperate to have a child, but discover Ed is unable to—and Hi's criminal record means they can't adopt. So they steal a baby from furniture store owner Nathan Arizona (Trey Wilson), whose wife just had quintuplets. Nathan offers a reward for the baby, and trouble abounds as Hi's former cell-mates Gale and Evelle Snoats (John Goodman and William Forsythe) and a bounty hunter (Randall Cobb) try to steal him back. Eventually Hi and Ed decide that stealing the baby was wrong, and they bring him back, setting all to rights.

The bare plot of the film is in this case less important than the style, which combines slapstick comedy schtick with mythopoetic visions. In one scene Hi is having a Looney Tunes battle in a mobile home, screaming in agony as he scrapes his knuckles across the stucco ceiling. The next, he's having a vision of the lone biker of the apocalypse, riding across the desert, destroying the "little things," like flowers and bunnies. Hi's rhetoric vacillates wildly too; sometimes he talks like a stereotypical lower-class crook ("That sumbitch. You tell him, I think he's a damn fool, Ed.") Other times, his language is Shakespearean or Faulknerian.  ("That night I had a dream. I dreamt I was as light as the ether—a floating spirit visiting things to come. The shades and shadows of the people in my life rassled their way their way into my slumber.")

Roger Ebert, for one, was totally thrown by the genre confusion, complaining that the movie "moves so uneasily from one level of reality to another that finally we're just baffled." The uneasiness, though, is the point; Ed and Hi are menaced, not by any particular antagonist, but by their own dreams of a better life, which, as Hi says, are thwarted by fate and the narrow-minded prejudice of others.

Hi and Ed want the American dream—which for Ed especially means climbing out of the lower reaches of the working class and into bourgeois respectability. When the two steal the Arizona baby, they also steal Dr. Spock's babycare book (the "user manual"), and the book shows up again and again through the film, a guide to proper behavior, and, therefore, upward mobility. Ed’s also eager to have over respectable friends, and so invites Hi's foreman, Glen (Sam McMurray) and his wife Dot (Frances McDormand) to meet the new infant. Dot terrorizes Ed with the specter of all the pediatric health hoops she has to jump through, while Glen approaches Hi about wife-swapping, scandalizing Hi's lower-class morals. Moving up the class ladder, it turns out, doesn't mean stability and respectability. It means anxiety and decadence.

But while the scenes with Glen and Dot and their brood of destructive nightmare children mock the bourgeoisie, the film as a whole is more ambivalent. Self-made man Nathan Arizona is a huckster and a blowhard, but he's also presented as a good man and a fount of wisdom. When he's approached by bounty-hunter Leonard Smalls, he refuses to deal with him, on the grounds that Smalls is "an evil man"—an accurate assessment. And in the final scene of the film, after Hi and Ed say they’re planning to separate because they’re no good, selfish and bad for each other, he gives them heartfelt advice. "I don't know much, but I do know human beings. You brought back my boy, so you must have your good points, too." And he adds, "I sure hate to think of Florence leaving me. I do love her so." He then suggests that they put their faith in advances in reproductive technology—parroting a very American faith in scientific development as the cure for all ills.

The last scene of the film is a vision, in which Hi sees himself and Ed surrounded by children and grandchildren at the holidays. Hi's had other visions that’ve come true, so there's reason to think this one too is more prophecy than delusion. Somehow, Ed and Hi (neither of whom has a job at the end of the film) are going to scrape together enough money for the latest fertility treatments and have a bunch of kids who also have good jobs and stable families and all get along and love each other.

This doesn't seem like it should be an impossible dream. Ed and Hi don't want to be rich and famous; they just want to be comfortable and loved. The Coen Brothers grant their wish as myth. So, does that mean the film is making fun of their aspirations for being too pedestrian? Does it mean the film is suggesting that even this mild, laudable dream is out of reach "with that sumbitch Reagan in the White House," as Hi puts it? Are the Coens mocking the American Dream, or the people pursuing the American Dream, or the circumstances and people who put the Dream out of reach? Perhaps all of those. And perhaps themselves as well, for making a film that follows its own idiosyncratic path to the same Americana as ever.