Amy Schumer’s movie career might be in the dumps. C 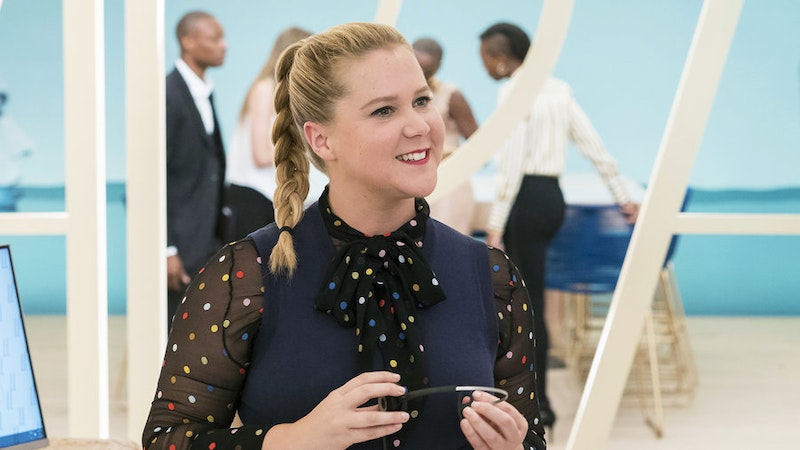 Snatched, last summer’s comedy featuring Amy Schumer and the long-absent Goldie Hawn, was such a hacky, unfunny disaster that it cast doubt on whether Schumer has any future as a movie star at all.

Now, Schumer’s back with I Feel Pretty—which is another failure, no doubt, although this film at least fails in a much more interesting and thought-provoking way. I Feel Pretty—it has nothing to do with the West Side Story number of that name—is a high-concept comedy, that could be called a more inward-facing semi-remake of the Jack Black comedy Shallow Hal. It’s written and directed by the team of Abby Kohn and Marc Silverstein, who previously made rom-coms with a twist like Never Been Kissed, He's Just Not That Into You, and How to Be Single.

In I Feel Pretty, Schumer plays Renee, a young woman in New York, plagued by insecurity and feelings of inadequacy, in a city where it appears every woman but her is a stick-thin model. One day, in a SoulCycle class, she falls and hits her head, an accident which suddenly makes her perceive herself as beautiful, despite looking no different to others than she had before. The confidence gives Schumer success at work and in her romantic life, although it also turns her into a self-centered and awful person.

The premise has some promise. In my New York City days I often heard women, including conventionally gorgeous ones, complain that living in NYC amongst models and other beautiful people, made them constantly feel unattractive. Many commentators have assailed this film in advance for daring to suggest that an average-sized, conventionally good-looking white woman could possibly lack confidence or feel unease, but that in fact happens. Indeed, I Feel Pretty is yet another of those movies in which a long-running debate was held leading up to the release, conducted entirely by people who hadn’t seen it.

I Feel Pretty blows it, for quite a few reasons. First: it’s not funny. It’s not that the jokes don’t land, it’s that there aren’t very many of them. It’s a comedy because it’s billed as one, and is photographed, pitched and paced like one, and the actors in it are mostly comedians. But not many funny things happen, aside from a handful of physical comedy setpieces, most of which seem recycled from Schumer’s previous hit Trainwreck. This film is PG-13 and has eliminated most of the raunch, without making up the laughs anywhere else. The film takes something serious that exists, body dysmorphic disorder, and tries unsuccessfully to wring comedy out of it.

And perhaps worst of all? While I Feel Pretty ends with a heartfelt monologue about the terrible messages given to girls from an early age, it’s set within the makeup and fashion industry. But the film lets that industry off the hook, reaching the bold conclusion that the fashion world should keep on doing what they’re doing, while being a little bit more savvy when it comes to marketing to budget-conscious customers who shop at Target. And in making that point, the film implicitly, and weirdly, conflates the poor with the unattractive.

When it comes to fashion satire, The Devil Wears Prada this is not. The TV series The Bold Type, set at a women’s magazine and soon to return for Season 2, handles this material much better as well.

You know who else has done better work on this very subject? Amy Schumer. Both in stand-up and on her Comedy Central show, Schumer’s been responsible for a lot of comedy that’s interrogated standards of female beauty and body image more effectively and bitingly than this movie does, delivering the laughs that I Feel Pretty lacks.

Schumer’s not terrible here, and it’s important to note that she’s not credited as a writer or producer, as she was for her own show as well as Trainwreck. One also can’t help but notice that Schumer, even when she’s “ugly,” is still conventionally attractive. The very appealing Aidy Bryant, from Saturday Night Live, plays one of Schumer’s friends; the movie might’ve been better if Bryant and Schumer had swapped roles.

It’s not all bad. Rory Scoval, the talented stand-up comedian, has a winning turn as Schumer’s charming suitor, while Michelle Williams gives a very entertaining, against-type performance as a fashion house scion with more than a hint of Ivanka Trump to her. And it’s also great to see Lauren Hutton as the Williams character’s grandmother.

But probably the strangest thing about I Feel Pretty is its product-placement relationships. Target is referenced repeatedly, but is depicted as a place frequented by the poor and unglamorous, and the film for no apparent reason relocates its headquarters from Minneapolis to Boston. As for SoulCycle, it’s featured even more prominently, but the film implies that taking a class there carries a heavy risk of personal maiming, not to mention activation of body-dysmorphic curses.