Film Review: We the Animals Overcomes Its Preciousness

Comparisons to Moonlight will abound, but they’re not accurate. B- 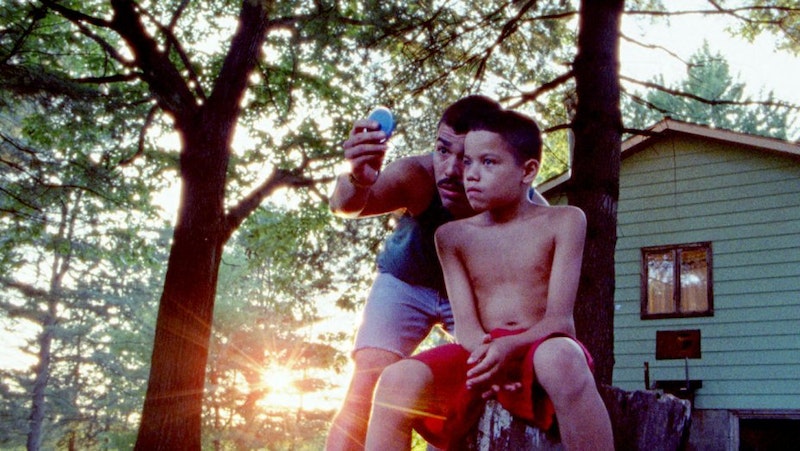 Tones not unlike those of Terrence Malick flesh out the vision of impoverished childhood in We the Animals. As the title suggests, it envisions masculine youth as something untamed, with can be exhilarating and discomfiting in equal measure. Based on the novel by Justin Torres, Jeremiah Zagar’s film is a freewheeling excursion through its young protagonist’s life. There’s no coming of age, more a simple examination of what it is to be his age.

Jonah (Evan Rosado) is the youngest of three brothers. Together with Manny (Isaiah Kristian) and Joel (Josiah Gabriel), he scrambles through the seemingly limitless days, nights, and landscapes of childhood. The New York backwoods around their home feel like an entire world—the camera (shot with soft celluloid) often hovers at their level. The offbeat folkish soundtrack from Nick Zamutto of The Books is a frantic evocation of how the unpredictable feels to young minds. Frequent fantastical sequences illustrate Jonah’s vivid imagination—animated drawings, floating into the air as he shuts his eyes and pictures it. As a sensory collage, the movie is often interesting to look at and listen to.

This isn’t solely about the wonders of childhood, though. The boys’ father, known only to us as “Paps” (Raúl Castillo), abuses their mother, Ma (Sheila Vand). The movie refuses to project a one-note portrait of terror, however, instead opting for a more complex and troubling mixture of violence and tenderness. Coming as it does from the boys’ perspective, the film captures how abuse can be swallowed up as but another fact of life in the minds of those who experience it. In one long stretch of the film, Paps disappears and Ma withdraws into near-catatonia, leaving the brothers to fend for themselves, relying on ingenuity, the kindness of neighbors, and occasional stealing to survive. Not long after, Jonah’s greater sensitivity and incipient attraction to other boys estranges him from his coarser older brothers, and the overall view of youth sours into something darker, sometimes harrowing.

Comparisons to Moonlight may abound, though the perspective and aesthetics of this movie are not truly aligned with that one. But Rosado gives Jonah a similarly deep-core gravitas that little in that film did, a seriousness that feels very true of quiet, thoughtful kids. He keeps We the Animals intriguing even as it often comes close to feeling scattershot, or even overly precious in its formal flourishes.