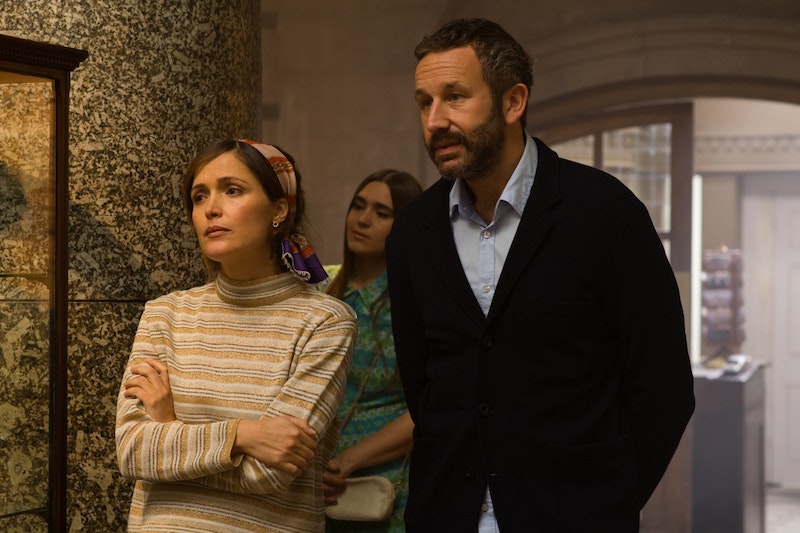 Juliet, Naked feints at a reasonably fun rom-com setup. Suffocating English small-towner Annie (Rose Byrne) feels lured from her humdrum day-to-day with longtime boyfriend Duncan (Chris O’Dowd) toward a new man. The twist is that the new man, Tucker Crowe (Ethan Hawke) is a washed-up former rock star of whom Duncan is a devoted fan. There are elements here with which Nick Hornby, who wrote the novel on which the movie is based, is quite comfortable—music, obsessive fan love, thorny relationship tangles. But the movie drapes that promising skeleton in more generic meat.

By the time Tucker comes to England and meets Annie, she’s already dumped Duncan. The man and the object of his devotion only have one sequence of any consequence together. Any message about the emotional hazards of idolization is mainly left aside. Tucker’s humanization is also fairly generic, mainly revolving around troubled relationships with his estranged kids. For her part, Annie stresses about not having done anything in her life while mainly reacting to what other characters are doing. It’s gratifying that the film doesn’t go the route of making her a pawn in a romantic competition between Duncan and Tucker, but it doesn’t exactly fill in her interior life well with what it does instead.

Under Jesse Peretz’s direction, the film ambles along at a consistent level of affability, often putting up a good front of emotional depth and dramatically sound setpieces on a scene-by-scene basis. It’s only when you think about Juliet, Naked altogether that it occurs to you, “Wait, what was the point?” There are multiple angles—trying to repair fractured relationships and living in the aftermath of fame, reconsidering one’s life choices, engaging in an all-consuming ultra-specific hobby—that reasonably could intersect in an organic way but never actually do. The source material plus four credited screenwriters suggest that no consistent vision existed for the story being told here.

Byrne, O’Dowd, and Hawke are all fine. They’re called upon less to inhabit characters than they are to go along with whatever’s happening in the current situation, and they pull this off well. This is a reason the movie is able to hang together for as long as it can before it peters out into vague disinterest, wrapped up in a conclusion you’ll have called from early on. As Hornby adaptations go, it’s nowhere near the solidly appreciated likes of High Fidelity or About a Boy. It feels more like imitations of those movies than the genuine article; in the same way Tucker Crowe’s fake songs ape 1990s grunge.