Film Review: The Shape of Water Ranks as One of 2017’s Best

A gorgeously rendered story of love, passion, and beauty. A 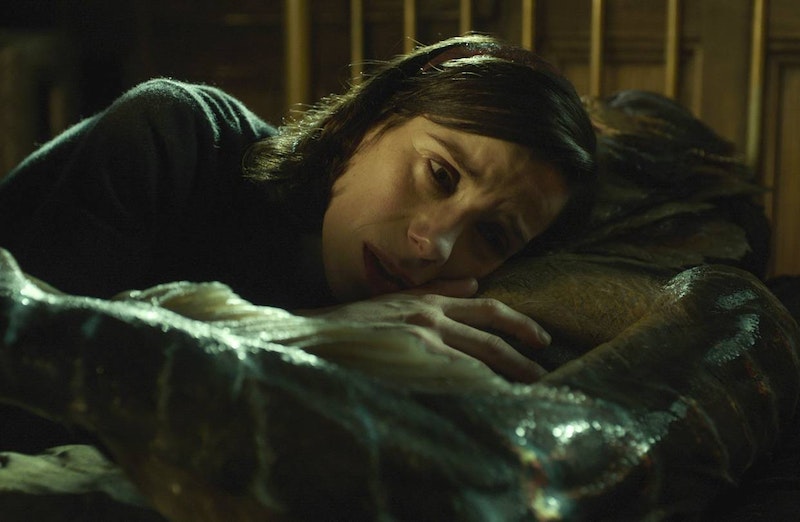 The Shape of Water doesn’t arrive with a premise that’s promising. It’s a fantasy love story—a sexual one—between a mute woman and a humanoid sea creature, coming from director Guillermo del Toro, a filmmaker with an uncommon talent and voice but an uneven record of turning his vision into completely satisfying films.

So it’s to my surprise that The Shape of Water is one of the year’s best films, a gorgeously rendered story of love, passion, and beauty. It’s up there with Pan’s Labyrinth as the best films del Toro has made, and may be the best movie set in Baltimore that’s directed by someone other than Barry Levinson or John Waters.

The film is buoyed by a gorgeous look (from cinematographer Dan Laustsen), a first-rate score by Alexandre Desplat, and excellent turns by some of the world’s greatest character actors (Michael Shannon, Michael Stuhlbarg, Richard Jenkins, Octavia Spencer, and Nick Searcy). And at the center of it all is this heart-wrenching, heartbreaking romance, between a mute human and a mythical fish-man.

The film is set in 1962 Baltimore amid an air of Cold War paranoia, reminiscent of the great animated film The Iron Giant. It stars Sally Hawkins as Elisa, a woman mute since birth who works as a janitor at a government research facility. One day, the facility brings in “The Asset” (Doug Jones), an amphibious humanoid creature fished out of a river in South America.

The Asset soon ends up in the crosshairs of Stuhlbarg’s scientist with a secret, Searcy’s bureaucrat, and Shannon’s evil colonel. Jenkins, meanwhile, plays a closeted gay commercial artist.

It’s a romance, an adventure, and a thriller—and somehow, the film juggles all of these tones and genres brilliantly. The most recent del Toro film, 2013’s Crimson Peak, juggled differing tones with somewhat less success, but this time, it’s a home run.

A mixed performance from Gary Oldman in Darkest Hour. B

Just a few months after Christopher Nolan’s Dunkirk provided an intimate look at that important World War II evacuation, Joe Wright’s Darkest Hour shows us the political side of that event. Wright, who previously made the astonishing single-take depiction of Dunkirk in his film Atonement, focuses on the rise of Winston Churchill, and how he marshalled support for Britain to fight all-out against the Nazis.

It’s 1940, the Nazis have all but entirely conquered Britain’s European Allies, and Britain has a choice: Try to reach a peace settlement that leaves Hitler in control of Europe, or fight, despite depleted military capabilities. As the film begins, a dying Neville Chamberlain (Ronald Pickup) has stepped aside as Prime Minister, and while Churchill, widely considered a drunken buffoon, has replaced him, the entrenched government, led by Chamberlain and Lord Halifax (Stephen Dillane), is seeking to undermine him as they oppose war.

Churchill’s played by Gary Oldman, with prosthetics, a fat suit, and other makeup effects that make the actor look roughly three times his normal size. Between the extreme makeup and a written role that’s all long speeches and other scenery-chomping monologues, Oldman-as-Churchill is the most transparent, brazen attempt at assembling an Oscar-winning performance since Anne Hathaway in Les Miserables five years ago.

The film spends a lot of time on political intrigue, including Churchill’s attempts to win over King George (Ben Mendelsohn). But even more is taken up by Churchill eating, drinking, and just generally being a big man with large appetites.

The politics are compelling, especially if you’re anything of a World War II buff. It’s a worthy companion piece to both Dunkirk and Wright’s Atonement. The final big scene—the "We shall fight on the beaches" speech—is well-staged and ends the film on a high note. But honestly? The King’s Speech, maligned as it’s been, was the better film.

One other thing about this movie: If you remember American culture and politics during the run-up to the war in Iraq, you may recall that in those days Churchill analogies were every right-of-center columnist and commentator’s favorite crutch. It’s 1938 again, war is coming, and you have a choice: be like Churchill, back the war, and be strong and right, or oppose the Iraq war and be Neville Chamberlain, a weak disgrace. I remember some people, most notably Peggy Noonan, who’d frequently describe George W. Bush's speeches as “Churchillian.” Which I guess was apropos, since Bush mumbled a lot, too.

The Churchill analogy to Iraq broke down, for obvious reasons. But I highly doubt we’re done with it forever. When we invade Iran in two years, you know they’re going to be quoting Churchill in Darkest Hour all the damned time.

The events of recent months, and the breakdown of tolerance for those with any history of alleged sexual predation, are shaping up as the greatest test to date of Woody Allen’s ability to keep making a movie every year.

But in the meantime, we have Wonder Wheel, Allen’s latest, and one with an interesting dichotomy. It looks absolutely amazing—but nothing that happens character- or plot-wise is the slightest bit compelling. Allen is once again working with the legendary cinematographer Vittorio Storaro, who shot Allen’s first-rate Café Society last year, only this time there’s not really anything of note going on except for the cinematography.

The film is set in 1950s Brooklyn, as familial intrigue plays out in the shadow of Coney Island, with the lights from the rides providing Wonder Wheel’s signature glow. Kate Winslet plays a woman who’s married to the carousel operator (Jim Belushi) but having an affair with a young lifeguard (Justin Timberlake). Meanwhile, Belushi’s daughter (Juno Temple) shows up, while on the run from mobsters.

As usual with Allen plots, there are affairs and betrayal, as well as a particularly silly subplot involving the mob, playing by Sopranos alumni Tony “Paulie Walnuts” Sirico and Stephen “Bobby Bacala” Schirripa.

Winslet gives a strong performance—and practically glows from the light—while it’s nice to see Belushi having a career resurgence this year, after his part in the Twin Peaks revival. But Timberlake, as much as I like him as an actor, is perhaps the least convincing ever of the many actors to appear as a Woody stand-in. And the less said about the mob guys, the better.

Will the #Metoo moment lead eventually to Woody Allen no longer being able to attain funding or get actors to work with him? Perhaps. But if Wonder Wheel ends up being it, he’s not exactly going out on a high note.