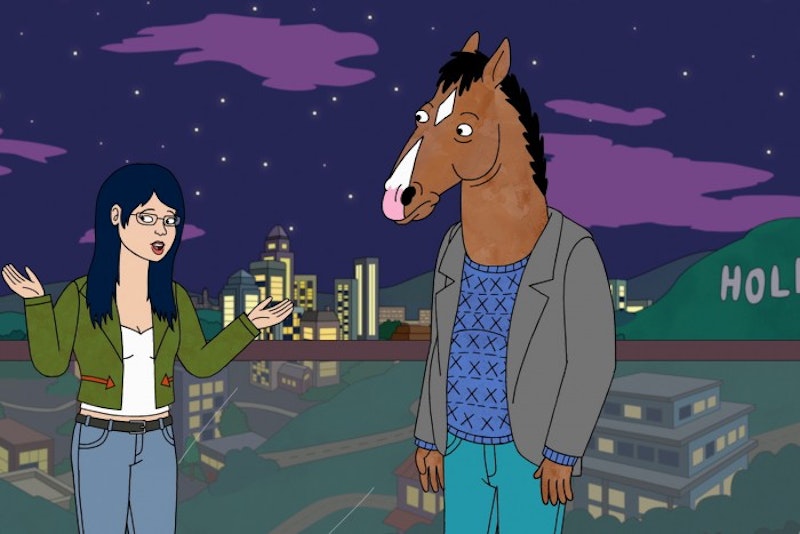 In my Netflix binging, I came across Bojack Horseman and expected perhaps another adult animated show in the vein of The Simpsons or Family Guy. But what I found instead was something that went beyond anything I could have anticipated. Bojack Horseman serves as an excellent portrayal of depression, its impact on the individual experiencing it, and the world at large. If one wants to understand the process of depression and what the impact is, mixed with a heavy dose of Hollywood potshots,  watch Bojack Horseman.

The titular Bojack Horseman, voiced by Will Arnett, is a washed up sitcom star known for his role in a Full House-style sitcom called Horsin' Around. Bojack's sitcom life is sharply contrasted with his reality. Often, conflict arises from his desire to make his reality more like a sitcom and realizing he can't. His sitcom life is a santized, idealized world, where problems are resolved before the end of each episode. This desire for closure manifests in self-destructive behaviors, and consequences must be dealt with later on. The only closure that usually occurs is when he burns bridges with former friends, cast members, or exes.

There's a conspicuous absence of scenes where BoJack is seeing a therapist for treatment, nor does anyone ever really mention the term “depression.”  BoJack's mental health is framed by other people in his life as an issue of personal failing, something that he has internalized and is perpetuating. This leads to a point of frustration in the first season when his ghost writer, Diane Nguyen, mentions that BoJack is psychologically stuck. He can't move beyond the stage of awareness, and is seemingly incapable of knowing how to.

There's a mirroring of this in the real world, where attitudes about mental health often leave individuals without a support system. There's often a sense that these people are “stuck,” trapped in a psychological prison that to an outsider seems obvious but to the person experiencing it is all too real. BoJack's consequences have been dire, ranging from ruining his connections with people he cares about to encouraging the unhealthy lifestyle and drug abuse that eventually kills one of his fellow cast members. But still, the world doesn't recognize this for what it is and he is left to repeat the same mistakes over and over again.

But within this limited confine, there is eventually an end. BoJack's attempts to make himself feel better by achieving something have consistently failed, and eventually he begins to form a bond with his half-sister Hollyhock. In the end, it was because he saw a person similar to himself that he is able to move beyond the rut that he carved out for himself.