A James Franco triumph. A- 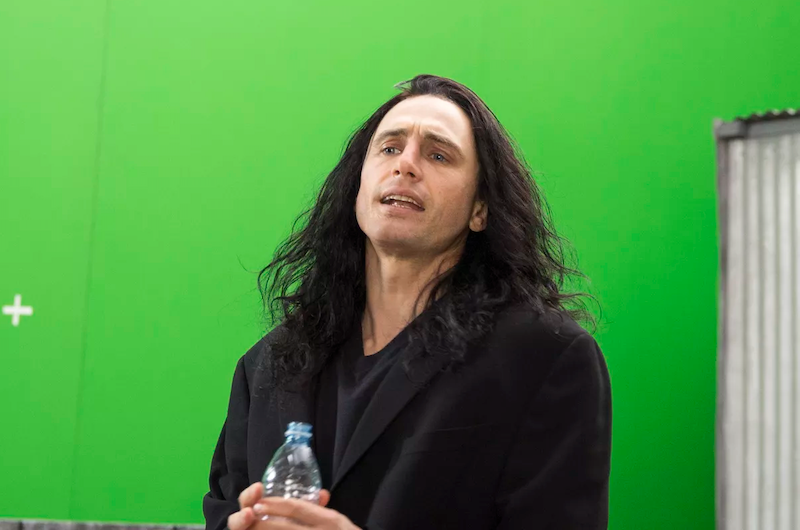 With The Disaster Artist, James Franco does for the cult anti-classic The Room what Tim Burton did to Plan 9 From Outer Space with Ed Wood. It’s a hilarious, highly satisfying effort that’s certain to appeal to longtime Room fans. As for those who’ve never heard of The Room? That’s a more complicated question.

Most know the story by now: In 2003, a heavily-accented international man of mystery named Tommy Wiseau used a fortune of uncertain provenance to produce a bizarre independent film, directed by and starring himself and meant to showcase his dreams of Tennessee Williams-style dramaturgy.

The film was released in a handful of theaters to little fanfare, but a group of comedians and cineastes in L.A. discovered it, developing a Rocky Horror Picture Show-style system of callouts and catchphrases.

The film adapts Sestero’s memoir pretty straightforwardly, using Sestero as the audience surrogate as we’re brought into the weird world of Wiseau. They meet in a San Francisco acting class, this young pretty boy and his older, stranger friend, and soon they’re in Los Angeles, making the famously chintzy movie, which for some reason cost $6 million.

These moments are depicted in a surprising way, with help from well-known actors (the Francos, Seth Rogen, Alison Brie, Jacki Weaver, Nathan Fielder) who you can tell have great love for the source material. It gets uncomfortable at times, especially in the scenes of Wiseau acting like a tyrant on set, including in those sex scenes.

At other points, including a surprisingly poignant scene at a craft services table, the film depicts a wonder at being part of the making of a movie that’s completely divorced from any notion of whether the film is good.

The film may be the best use to date of James Franco’s off-kilter energy, as he embodies Wiseau’s deep weirdness, as well as his imposing physicality. Dave Franco is a perfect Sestero; it’s never a distraction that the two leads are brothers.

Meanwhile, various members of the Hollywood cult of The Room make cameos, including Franco’s old Freaks and Geeks boss Judd Apatow, all too happy to play himself as a preening jackass. Bryan Cranston shows up too, in a Canter’s Deli appearance that I don’t remember from the book.

This movie may not make a lot of sense to anyone who’s never seen or heard of The Room. But there’s the helpful inclusion of a credits sequence with the scenes of the two movies side-by-side; let’s just say Nathan Fielder is really good at falling on pavement.

The film doesn’t get to the bottom of any of the various mysteries involving who Tommy Wiseau is or where he came from. But that’s okay—the mystery’s part of the fun. The film, though, does speak to the other central irony of The Room—Wiseau’s effort was dead serious, but led to nothing but comedy.

The Sandwich Nazi. B+

Two and a half years ago at the South by Southwest Film Festival, I caught a one-of-a-kind documentary called The Sandwich Nazi, a touching examination of a spectacularly foul-mouthed Vancouver deli owner named Salam Kahil.

A self-proclaimed retired male gigolo who I described as “probably the human race’s closest approximation to Triumph the Insult Comic Dog,” Salam appeared at the festival and became the first person I’ve ever seen drop trou during a post-screening Q&A. (Though, as we sadly learned earlier this year, such behavior isn’t quite so rare at Austin’s Alamo Drafthouse.)

For various reasons, including a falling-out between the filmmakers and the subject, The Sandwich Nazi sat on the shelf for a long period of time. But it’s now finally available for a VOD release, on (Vimeo on Demand, iTunes, Amazon Instant Video, Microsoft, and Google Play).