Populism for the Rich

Fascism and class in Remains of the Day. 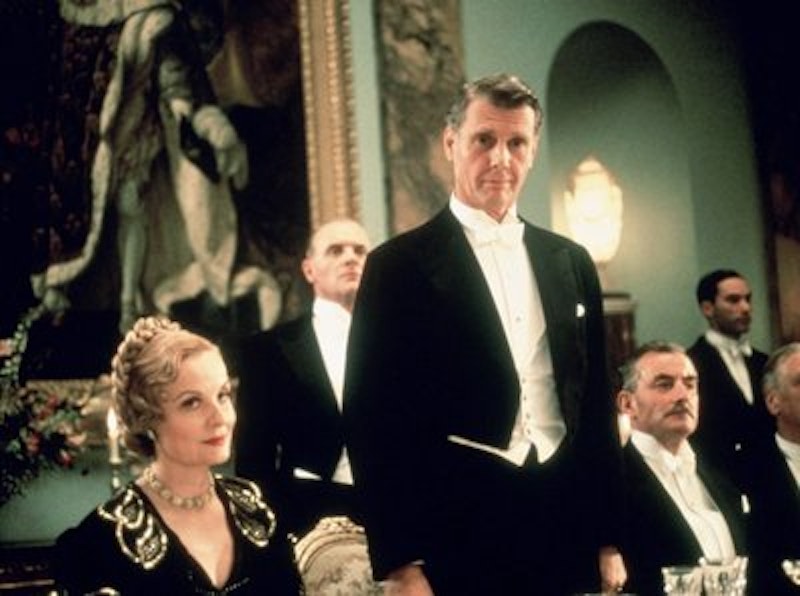 When people talk about fascism and class, the narrative they use is generally populism. With the recent French election involving Le Pen, or Trump’s American victory, many pundits argued that fascism was the result of mass, lower- and working class-discontent with the pompous preening elites. Globalization, economic anxiety, immigration—working people are angry at being spat upon, ignored, and exploited, and so they turn to gauche authoritarian fascists, who tear up the white paper of propriety and offer authentic snob-bashing for the volk. Fascism is, by these lights, a movement for, if not by, the underclass; its energy comes from real working class anger, even if that anger has been cleverly misdirected.

Class and fascism in the highly acclaimed Merchant-Ivory film Remains of the Day (1993) interact much differently. The adaptation of Kazuo Ishiguro's novel focuses on the story of Stevens (Anthony Hopkins), a working class butler in service to Lord Darlington (James Fox). Darlington is horrified by his experiences in World War I, and by the suicide of a German friend, which Darlington attributes in part to the harsh conditions imposed by the Treaty of Versailles. He’s determined to keep England from going to war with Germany again, and organizes numerous meetings with Nazi officials. He also becomes close to British Nazi sympathizers.

Stevens, as butler, is in charge of making sure all of these meetings with Nazis go well. The movie is, thematically, about Stevens' dedication to service, and the way in which that dedication cuts him off from his own emotional and moral life. Stevens denies his own romantic interest in Miss Kenton (Emma Thompson) the chief housekeeper; he refuses to close his own father's eyes in death because he has to wait tables for Nazis. Most of all, he refuses to follow his own conscience; when Darlington fires two German Jewish maids, perhaps dooming them to deportation and death in the camps, Stevens acquiesces. He will not even say forthrightly that Darlington was wrong to send the maids away, though Miss Kenton practically begs him to acknowledge her anger and horror.

Stevens does in fact try to speak for the maids; he protests to Darlington that they’re good workers, and looks horrified enough at Darlington's actions that the man looks guilty and starts to stutter. Stevens also tries to find another berth for the women, without success. Miss Kenton threatens to leave if the girls are let go—but she can't, because, as she says, she’s alone in the world and has no other options.

Stevens' failure to pursue the relationship with Miss Kenton also has as much to do with his class as his individual limitations. In accordance with the practices of the time, servants at Darlington aren't allowed to have romantic relationships; when men and women servants want to get married, they have to give up their careers. Stevens has a comfortable, responsible job—no small thing for a man whose father worked himself to death. If he forswears romance, it isn't because he loves his job so much as it is that his employer insists that he has to choose between work and everything else. Stevens' job consumes him, but that's not because Stevens is irrationally devoted to his job. It's because class hierarchy has set out to devour him.

That elite class hierarchy is not threatened by fascism. On the contrary, it fits into fascism quite neatly. Darlington wants to promote peace out of pure motives of friendship and sympathy. But his upper-class prejudices make fascism an easy sell. He’s inclined to look down on, condescend to, and dehumanize his workers, and prioritize the whims of his own upper-class buddies. Why wouldn't he dismiss Jewish servants?

In a painful scene, one of Darlington's asshole upper-class friends quizzes Stevens about international economic policy. Stevens doesn't know anything about it, and says so. The asshole uses this, in front of Stevens, to make the point that common people shouldn't be allowed to vote and make decisions. Notably, there’s no way to know whether Stevens really has no opinion on these issues or whether he simply is required by his position to be deferential. Either way, the upshot is not that Stevens seems unfit to rule the country, but that his tormentor does.

We all know that "just following orders" is no defense for genocide; Nazi officials who signed death lists are murderers even if someone at the next rung up told them to do so. But Stevens isn't a Nazi official; he's a working class guy who realistically has no power to sway Darlington. He could perhaps have registered a symbolic protest and walked away from the job. But Darlington would still have pushed his Nazi agenda.

A convenient interlocutor asks Stevens if he wouldn't have rather made his own mistakes, rather than finding comfort in the fact that Darlington, at the end of his life, admitted his own failings. Perhaps Stevens would’ve liked to make mistakes of his own—but he was born into the wrong family. Darlington, by upper class pedigree, was in a position to do real damage to his nation. Stevens was not. Everyone can do harm in a small way, but most people aren't able to make world historical bungles.

Fascism claims that it’s a movement of the people; the will of the volk. Fascists tend to lie, though. People like Trump and Le Pen, Peter Thiel and Steve Bannon aren't striving working men. Rather than wringing our hands over populism, maybe we should instead focus on the people with enough power and money to hate with real effectiveness.