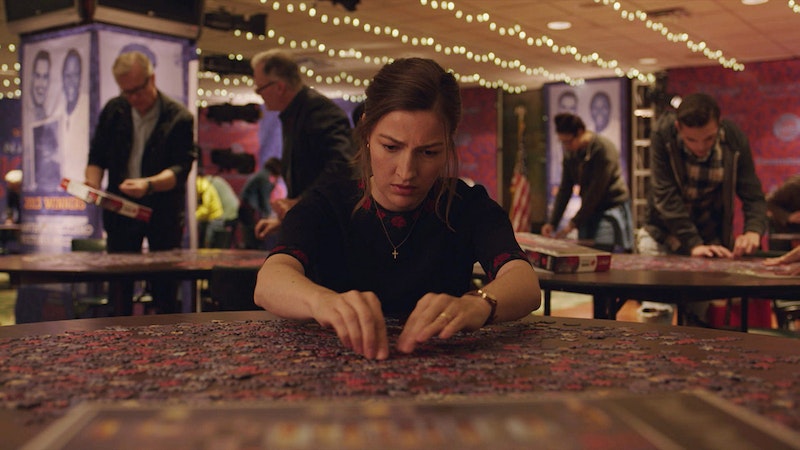 Puzzle, an American remake of a 2010 Argentine film of the same name, has the aesthetic of a life insurance commercial. Or medication for fibromyalgia or mesothelioma. This is director Marc Turtletaub’s second film: he’s primarily worked as a producer ever since selling his father’s subprime mortgage lending company The Money Store in 2000. In other words, the man’s not directing for hire, he’s not a hack eking out a living on work devoid of artistry in hopes of one day scrounging up enough money to shoot his passion project.

Puzzle, which follows a Connecticut housewife named Agnes (Kelly Macdonald) clearly on the autism spectrum and toils away in quiet desperation under appreciated by her oafish husband and her two grown sons, is Turtletaub’s pet project: “It’s a story about a woman who’s a mother and a wife living in suburban Connecticut, doting on her husband and her sons. And I knew that woman—it was my mother. I grew up in suburban New Jersey, and she doted on my dad and me. When I read [the screenplay], I felt like it was a story I could tell.”

At the outset, Puzzle rings alarm bells for the inoffensive and bland barely indie movies clogging up arthouses across America: the cinematography and the cloying score are straight out of contemporary advertising. But beyond that, the film defies easy categorization and dodges expected complaints: Agnes is a very eccentric woman, and her husband Louie (David Denman) is a plump airhead, close-minded and inconsiderate. When Agnes encourages their eldest son Ziggy (Bubba Weiler) to pursue his interest in cooking and perhaps go to culinary school, Louie dismisses the idea and says that cooking “isn’t manly” (this is the same asshole who won’t stop bitching when Agnes forgets to buy his favorite cheese at the grocery store). It’s a mystery why they ever got married, but being a socially impaired devout Catholic in a small, parochial town probably forced her to make a lot of bad decisions.

Someone gets her a 1000-piece puzzle for her birthday and she becomes completely obsessed, finishing it off in minutes. She goes to a puzzle shop in Manhattan and grabs the phone number off a flyer of a person seeking a partner in a puzzle competition. She secretly meets with Robert (Irrfan Khan) at his luxe townhouse in the city twice a week, and eventually they kiss and sleep together. This is a woman who showed up to their first meeting with a cross still on her forehead for Ash Wednesday. Robert catches feelings, but Agnes doesn’t run away with him, and ultimately it’s not clear whether or not she leaves her family: the film ends with her on a train to Montreal, a city she’s always wanted to visit but never could. Finally free.

This movie surprised me because it gave no narrative quarter to her lousy husband, she didn’t end up with the scuzzy puzzle partner, and successfully encouraged her troubled son to pursue a career that was verboten in the eyes of their fragilely masculine patriarch. Puzzle is brutally honest and at times intensely sad despite its anodyne presentation. It’s a moving and empowering story of a repressed and oppressed woman stuck in quiet desperation escaping on her own terms, and not into the arms of one of the two men in her life. Macdonald and Denman give stellar performances, and it’s nice to see two instantly recognizable character actors get some room to stretch and contribute to a film that will surely be overlooked when everyone is drawing up their best of lists in a few months.

Most importantly, Puzzle is through the eyes of Agnes, and Turtletaub is able to convey the isolation and overwhelming emotional state of someone on the spectrum and stuck in a life she never wanted to lead. That it ends ambiguously, with the layabout husband still fuming over her fling with Robert, and the latter left by the wayside when Agnes decides to ditch an international puzzle tournament in Brussels, underscores her integrity and caps the film’s unbroken perspective. With such a dialysis-core poster, score, and look, Puzzle is shockingly forward-thinking and uncompromising in its commitment to showing one woman’s unhappiness and her resolve to ditch her guilt and seek out happiness. No concession is given to her Catholic community, her miserable life at home, or the puzzle partner friend turned lecherous suitor. She escapes, leaving heartache in her wake, but only to those men that deserved it.