Ramping up action from original. A- 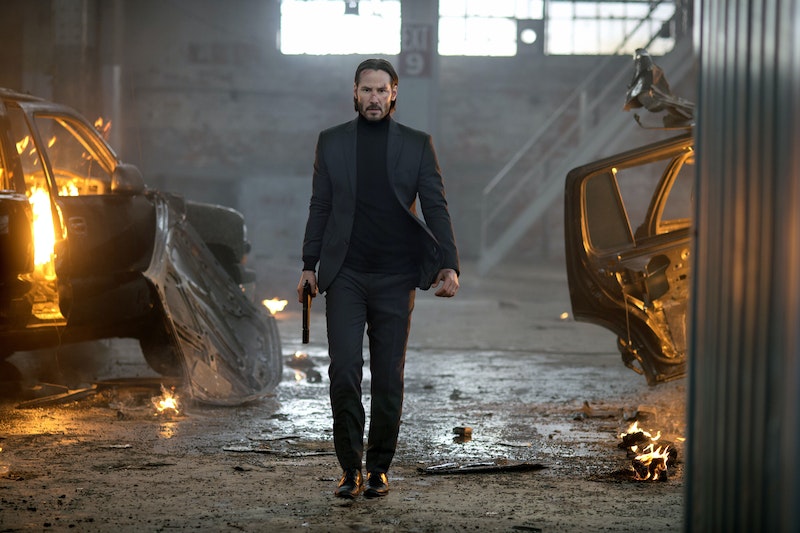 The original John Wick, in 2014, was one of the big surprises of that cinematic year. In an age when most action-adventure movies are either multi-part comic book sagas or fantasias of Mark Wahlberg solving real-life tragedies with his fists, John Wick was delightfully simple: Bad guys kill a retired hitman’s dog, so the hitman comes back and exacts brutal revenge.

The first film was a sleeper hit that, all these years later, re-established Keanu Reeves as an action star. Now there’s a sequel, which retains most of what was good about the original. It gives up some of that simplicity, in order to build out an elaborate mythology about a secret society of assassins, but it also ramps up the action and is more exciting. It’s an intense, thrilling action spectacular that never takes itself too seriously.

John Wick: Chapter 2 starts with an action blowout that wraps up the plot of the first movie with Fargo’s Peter Stormare as a Russian gangster. After that, Wick is once again retired, and living alone with a new dog that stays alive and unharmed. Then he’s visited by an Italian crime lord and sent to carry out one last murder.

This leads into a sequence set in Italy that features one of the best weapon-demo montages ever. It’s a normally perfunctory scene that’s in almost every Bond movie but here is given a witty update, with Peter Serafinowicz as a weapons provider known as “The Sommelier.”

This leads into a bonkers third act that has Wick facing off with, seemingly, every assassin in New York, with the spectacularly inventive final battle taking place in a Hall of a Mirrors in an art museum. Sure, the film gets New York train geography hilariously wrong, with a PATH station magically relocated to Lincoln Center. But it’s fun enough to forgive it.

There’s a lot of room for small actor moments. Morpheus himself, Laurence Fishburne, reunites with Reeves as an NYC street lord, while Common has some great moments as a rival killer. Ian McShane gets to chew scenery as proprietor of The Continental hotel/hitman haven. And Ruby Rose steals multiple scenes as a mysterious silent assassin.

Both John Wick movies were directed by Chad Stahelski, who was Reeves’ stunt double on the Matrix movies. Whether his next film is John Wick: Chapter 3 or something else, this is a filmmaker worth watching.

The LEGO Batman Movie. A-

The LEGO Batman Movie is the best Batman movie of the past five years. The second-best is Batkid Begins, the 2015 documentary about a Make-a-Wish kid who got to meet a guy dressed as Batman in San Francisco. All the way at the bottom is last year’s “official” Batman movie, Batman v. Superman: Dawn of Justice.

What does this tell us? The people running the LEGO franchise within Warner Brothers have a much stronger grasp than the DC Expanded Universe team of what Batman and the other DC Comics characters are actually all about. Better than the DCEU in just about every way, from everything from character development to narrative momentum to the inclusion of actual sunlight, and—you’re not going to believe this—joy. It also understands that perhaps movies about comic book superheroes ought to actually appeal to children.

Phil Lord and Christopher Miller’s The LEGO Movie, from 2014, was perhaps the decade’s most overachieving movie. What looked like a crass merchandising cash-in was actually a total creative triumph, equal parts funny, exciting and even moving—and one of its better gags was a small appearance by LEGO Batman, voiced by Will Arnett as a cocky romantic rival.

Now he’s got a whole movie, along with just about every major DC hero and villain. The Batman movie isn’t quite on the level of The LEGO Movie, but it’s an amusing adventure that’s likely to serve as something of a “gateway drug” for kids to discover Batman.

The film’s plot functions as a parody/homage to the entire history of the Batman character and its various incarnations over the years. The first 20 minutes is a straight parody of the Christopher Nolan Dark Knight movies, complete with a Hans Zimmer-like story, but as the film progresses it throws in nods and in-jokes that reference the comics, the old TV shows, the Burton movies and even the present Affleck era.

Anyone familiar with the Batman mythology will love this stuff. But even if they don’t, the film is funny and exciting all the same. Perhaps the people behind this film ought to get a crack at a live-action Batman film.

The first film may have been based on less-than-reputable material, with no chemistry between the leads, who gave performances that ranged from passable (Dakota Johnson) to laughable (Jamie Dornan), and sex scenes full of that old USA Up All Night trick of abruptly cutting away in order to avoid full-frontal nudity.

But the director, Sam Taylor-Johnson, gave it a go, giving the film a slick look and a gorgeous visual style. The first film was not a critical success—I noted at the time that about 30 different critics used the phrase “fifty shades of dull”—but it’s better than its reputation.

So naturally, when it came time to make the sequel Fifty Shades Darker, Taylor-Johnson and screenwriter Kelly Marcel were tossed, reportedly because James had full creative control and was unhappy with their work. The new screenwriter is Niall Leonard, a first-timer who happens to be EL James’ husband. And the director is James Foley, who knows a thing or two about dysfunctional relationships, having served as the best man when Madonna married Sean Penn in 1985.

The result is predictable, and mostly not in a good way. It’s a slapdash effort, poorly written and poorly directed, full of laughably underdeveloped sub-plots and plagued by one of the worst third acts I’ve ever seen. And the slick style of the first movie is nowhere to be found. Not even Grey’s apartment looks good.

The ending of the first movie, in which Ana Steele (Dakota Johnson) left Christian Grey (Jamie Dornan) over her refusal to formalize their S&M relationship with a contract, is reversed within about five minutes when they reconcile. Once again there are lengthy and plentiful sex scenes, although the movie is missing the most interesting aspect of the original—the push-pull over the contract.

But it’s just sloppy. Ridiculous sub-plots come and go, whether it’s the male stalker, the female stalker or a helicopter crash that’s easily forgotten. American office workers use British-isms like calling a calendar a “diary” and “get that sorted.” There’s a meeting at a publishing office that plays like a parody of media industry speak. And the continuity errors involving Dornan’s beard—clean-shaven in the morning, full beard in the afternoon—are funnier than most comedies I’ve seen recently.

It builds to a revelation that’s freshman-year Intro-to-Freudian-Psych obvious. And while the sex scenes are better than in the first film, they’re not actually sexy. If you want to see a movie that’s genuinely sexy and has Dakota Johnson in it, try last year’s A Bigger Splash.