No Women on the Highway

Nothing but men in Ida Lupino's The Hitch-Hiker. 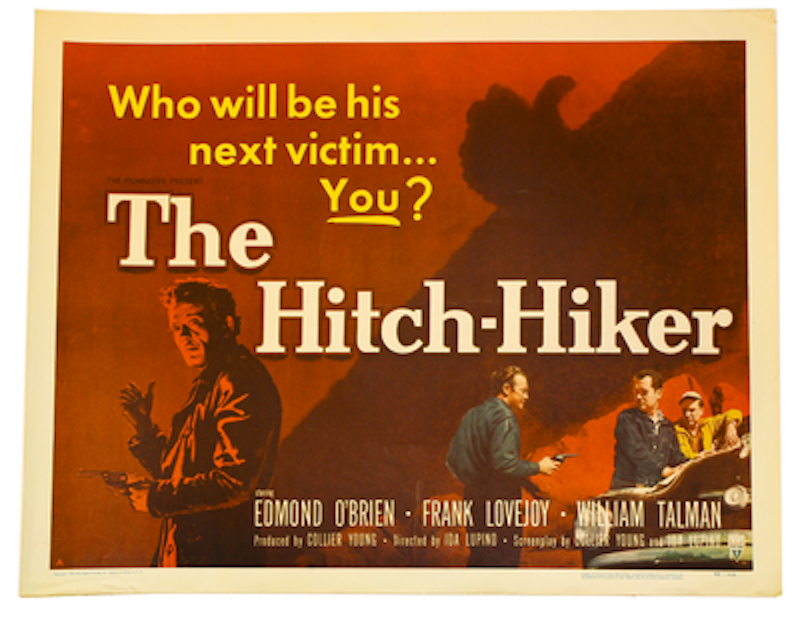 This is the most recent post in a series on women filmmakers. The last, on Yoko Ono's Bottoms, is here.

Ida Lupino's 1953 The Hitch-Hiker is often cited as the first noir directed by a woman. There's little about it, though, that indicates a woman directed it. Lupino had directed a number of women’s issue films before 1953, but in The Hitch-Hiker she focused on masculine subject matter, and masculine characters.

In fact, The Hitch-Hiker barely has any female speaking parts. A young Mexican girl who has a line or two, and a woman killed off-screen at the very beginning of the picture are I think the only non-male roles in the entire 70-minute film. Roy Collins (Edmond O'Brien) and Gilbert Bowen (Frank Lovejoy), the two married protagonists out on vacation, talk about going to see a strip show, but when Collins pulls up to a fan dance joint, Bowen, mindful of his wife and child, feigns sleep. Portraying women, in this film, is occasionally a temptation, but that temptation is successfully resisted.

Similarly, the wives of the two men are never pictured. A Hollywood film made today would cut back occasionally to the worried wives at home helping to organize the search; the movie would end with a tearful reunion. The Hitch-Hiker though, keeps its focus on the men; the last scene shows them, not at home in the arms of their family, but going to give a police statement. When the narrative does cut away intermittently from the men, it's to show us more men, as various American and Mexican officials conduct the search, without input from wives, secretaries, or any women at all.

But the noir is fascinated by femininity. At the beginning of the film, Collins and Bowen head out on a fishing trip; they banter about the possibly of engaging in some mile boys' night out naughtiness. But before they can do either of those manly things, they pick up hitchhiker Emmett Myers (William Talman), who, it turns out, is a robber and thug.

Myers forces the two to drive to the Mexican border, bullying and baiting them. At one point he forces Bowen to take a rifle and shoot a can out of Collins' hand, a sadistic game which emphasizes the two captives' impotence—even when they have a gun, they can't shoot it where it will do any good. He taunts them when he learns they lied to their wives about where they were going. He tells them they are "soft,” since either could’ve escaped if they weren't so concerned about sticking with the other. He's particularly dismissive when Bowen tells him his wife gave him his watch; Myers doesn't need watches from women. He takes what he wants.

Myers questions his victims' masculinity. Inevitably, trapped together in the testosterone crucible of the car, they question his as well. Collins, pushed beyond endurance, yells at Myers that he's nothing but his gun, and Bowen asks what will happen to Myers when he's on the other side of the barrel. Myers spends the whole film with his pistol out and pointed, even sleeping with it in his hand, protected by the fact that his one injured eye doesn't close, so his victims can't tell when he's asleep. The gun is an appendage, a visible symbol of phallic power, before which Collins and Bowen cower helplessly—until the expected conclusion, when Myers is finally stripped of gun and masculinity alike.

The focus on masculinity, sadism, and the cathartic release of power reversal foreshadows later films like Psycho and the slasher genre, in which axe-wielding deviants punish and penetrate until they are overthrown and penetrated in turn. Lupino's all-male ensemble, though, ratchets down the threat of violation—this is not Deliverance, and the film is circumspect about avoiding any indication that men might be objects of sexual violence, or sexual desire. When Myers and Collins exchange clothes, they do it carefully off-screen.

The film carefully avoids eroticism; it just as carefully avoids suspense. The reassuring cuts to show us the competent police hot in pursuit seem designed to let the viewer know that nothing too bad is going to happen. Collins falls to the ground praying futilely as a plane passes by where they walk in the desert, and Myers mocks him, but there's no question that someone is watching over them. God may be indifferent, but the gods of Hollywood boilerplate are not.

Hitch-Hiker ultimately feels like a movie trapped by that boilerplate—a potentially interesting film that never gets the nerve to make a break for it. There's something there about male-male friendships and power, or about the way innocent boys' outings can slide towards violence. But neither the criminal nor the good guys are interesting or individual enough to make the themes resonate, and the police are too competent for there to be any suggestion of a real challenge to the patriarchal order. Whoever Lupino is as a filmmaker, it's difficult to locate her individual presence in this film. Hitch-Hiker doesn't leave much room for women in that car.