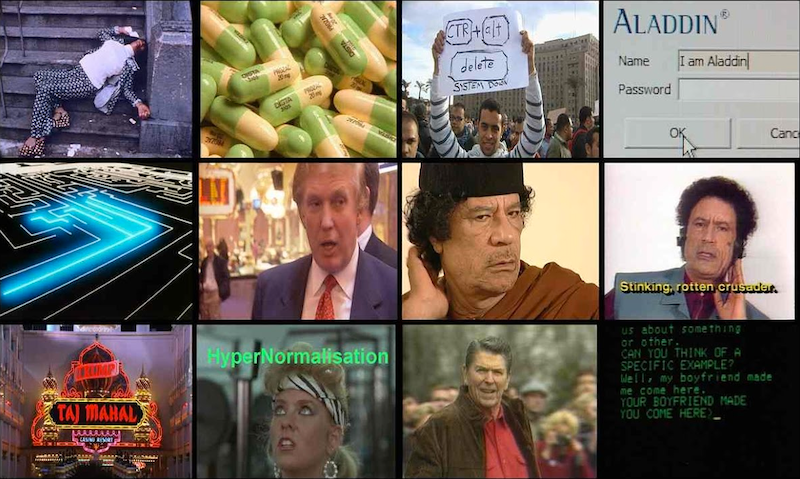 HyperNormalisation is a three-hour documentary that explores ideas more than it informs the audience. The attempt is to explain how our unsatisfying present came to exist the way it does: through changes in banking, advances in technology, and shifts in politics and diplomacy, all aiming to keep us safe in their simplicity. Filmmaker and narrator Adam Curtis argues that we live in a dream world, ungoverned by politics and instead ruled by “the System.” While I wouldn’t describe Curtis as a conspiracy theorist, HyperNormalisation does trade in enough superficial half-truths and occasional UFOs to feel like it. But perhaps that’s the point of the movie.

It begins in 1975, exploring the simultaneous events of New York City’s fiscal crisis, Henry Kissinger’s negotiations with the Middle East, and the Soviet Union pivoting toward obvious decline. Curtis argues that the banks bailing out New York and installing austerity measures lead to the increased power of the banks, and Donald Trump emerged as someone who knew how to profitably work the new system. Curtis blames Kissinger’s blind self-interest as the starting point for the Middle East chaos that has brewed ever since, the specific moment being when he double-crossed Syrian leader Hafez al-Assad, creating conflicting deals among Egypt, Syria, and Israel when Assad was seeking unity among Arabs. Assad confronted Kissinger in Damascus, telling him that what he had done would unleash demons long since buried beneath the surface Arab world. The vision of a Soviet Union beginning its decline is what gives Curtis his thesis for the film, pulled from anthropologist Alexei Yurchak. The idea is that everyone knew the Soviet system was failing, but because no one could think of any alternatives or solutions, everyone became so invested in keeping up appearances that the façade became reality. Yurchak called the effect “hypernormal.”

Curtis sees these events as a catalyst for when the West, particularly the U.S., begins to create its own dream world. With the emergence of suicide bombings, Ronald Reagan’s Secretary of State George Shultz says, “We became paralyzed by the complexity we faced.” At the same time, the earliest versions of cyberspace are created, and new antidepressants emerge to coincide with the self-help movement. With cyberspace, technological utopian John Perry Barlow creates a futuristic vision influenced by Timothy Leary and Thomas Jefferson, telling governments that, “The global social space we are building to be naturally independent of the tyrannies you seek to impose upon us.” However, the banks were already using the Internet to exert power, a point driven home when Barlow’s credit history was hacked and published.

One of the more amusing segments comes from Curtis’ use of footage from a Jane Fonda exercise video, explaining how the radicals of the 1960s evolved into selling us a lifestyle where the revolution begins within ourselves. One aspect of this is the increased use of mood-stabilizing medications, especially among children. Curtis also argues that increased use of social media becomes its own drug, mimicking certain aspects of talk therapy, with the algorithms of Facebook creating, to borrow a line from Nick Cave, a world so vain that everything is a mirror. The end result is the appearance of a world more stable than it actually is, built on the perception that risk has been minimized.

Curtis’ more challenging arguments come from ideas that are difficult to prove. One is that the U.S. Air Force engaged in “perception management,” manufacturing a conspiracy theory that UFOs were real and orbiting the earth as a cover-up for their own testing. It would be a diabolical scheme, which in reality took place in the Skunk Works era, creating the SR-71 Blackbird, among others. While officially declassified in the mid-1990s, it wasn’t an especially well-kept secret. The Air Force did have a few pranksters testing their new toys, and the UFO stuff was largely regarded as an amusing diversion. By the same turn, he describes the collapse of the Soviet Union as blindsiding the West. I don’t think we were caught off guard so much as surprised by the rapidity, with other Eastern Bloc nations falling like dominoes.

The most difficult case that Curtis makes involves Muammar Gaddafi, presenting him as a political pawn of Western public relations, with him taking the fall for what were often Syria’s crimes: the 1985 bombings at airports in Rome and Vienna, the 1986 bombing of a Berlin nightclub, and the 1988 Lockerbie bombing. In fairness, there’s conflicting information around these attacks. Italian investigators have pointed the finger at Syria for the 1985 attacks, although initial reports blamed Palestinian terrorist Abu Nidal. The 1986 bombing was mostly blamed on Gaddafi or Nidal; there’s one version that has Nidal acting as a mercenary for Libyan intelligence. Both of the men convicted for the Lockerbie bombing were Libyan, one of them an intelligence officer. The only person interviewed for the documentary is Gaddafi’s son, who claims that his father took responsibility for Lockerbie in exchange for easing trade sanctions, turning him into “the West’s best friend.” Aside from the conflicting information around these attacks, Curtis presents Gaddafi as a naïve innocent, swept up in diplomacy that he was ill-equipped to deal with. I think there’s some truth that Gaddafi may have been ideologically blind and unable to negotiate on the level of someone like Anwar Sadat, but presenting him as an innocent with his record of human rights abuses against his own people is absurd.

Another story in HyperNormalisation where it’s difficult to sort fact from fiction takes place at Trump’s Taj Mahal in the early-1990s. A high stakes Japanese gambler named Akio Kashiwagi was so successful in his endeavors that he’s alleged to have been part of the reason for the casino’s bankruptcy. The story is that Trump brought in a card counter who successfully helped the casino win back $10 million. However, Kashiwagi had substantial debts with a yakuza loan shark, and was fatally stabbed before he could re-pay the Taj Mahal. According to Wikipedia, the story is “unsubstantiated,” although Kashiwagi really was murdered and the Taj Mahal did go bankrupt. On Frontline’s story of Trump’s life, they described him as overextended on his credit with the casino barely breaking even.

In the build-up to 9/11, Curtis unleashes a series of clips from disaster movies as though he were making the case that the tragedy was a case of morbid wish fulfillment. Vladimir Putin emerges to lead Russia into a new era of opulence, autocracy, and political theater. The attempts of Occupy Wall Street and the Arab Spring fail due to a lack of leadership or direction, with Syria becoming mired in civil war. Terror attacks on soft Western targets attempt to create fear and chaos, leading to the drastic measures of Brexit and electing Trump. All the while, we’re reminded to just keep shopping.

Curtis doesn’t shy away from gore. He makes liberal use of the BBC World News archives that gives it a stamp of authenticity. However, among half-truths and speculation, the authenticity can feel exploitative.

In the months since HyperNormalisation’s October release, it manages to feel both prescient and dated. Curtis appears to anticipate Trump’s victory and administration of pathological liars. The unanticipated twist is that the constant lying is confronted and scrutinized. The resistance movement is still emerging. In his opening narration, Curtis says, “This retreat into a dream world allowed dark and destructive forces to fester and grow outside. Forces that are now returning to pierce the fragile surface of our carefully constructed fake world.” Perhaps the way to defeating these dark forces is to let a substantial counterculture emerge and to let the fake world collapse, but it won’t happen if we can’t be honest with ourselves.