Chappelle Ex-Partner Shines on His Own

Neal Brennan’s 3 Mics is stand-up plus. 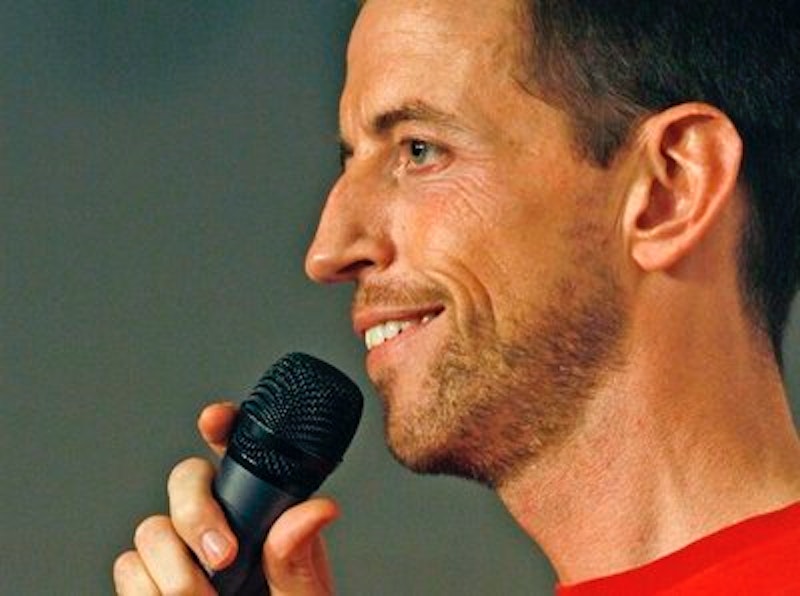 He looks like a slim, slightly grumpy twig off a weather-beaten tree. Or like a mordant Irishman of the sort with no light in his heart and no flesh on his bones. Neal Brennan finds life hard. “To say I have low self-esteem is not true,” he says. “I have no self-esteem. Like, I don’t have the architecture for good feelings. You give me a trophy, it’ll just slide right down. I don’t have the shelving.” The man who used to be Dave Chappelle’s right-hand writer/director has spent 10 years learning to be a stand-up comedian. In 3 Mics he demonstrates what a depressive can do: for example, put on a one-man stage show that makes a quietly insistent point of transcending the stand-up genre.

The Netflix special plants Brennan before three microphones: a microphone for one-liners, one for bits, and a third for spoken essays about Brennan’s life. The one-liners and bits work fine, and the essays are well put together and delicately performed. Each of the speeches builds to a throwaway, deadpan last line that’s meant to carry weight. This tricky balance—underweighted delivery, heavy content—is brought off by the discrimination Brennan brings to every pause and stutter. “So yeah, like, I can’t… hide. Like I, I want to hide… I, um, I’m dying to hide. But win or lose… I can’t,” he says, and the audience rises for a standing ovation.

Brennan deserves it: he nailed that line. Listening was like being in mid-conversation and hearing a friend manage to figure himself out a little. Your friend was standing on stage in front of you and a crowd of others, and you didn’t actually know him. But even so. The moment held, and Brennan has created that moment who knows how many times. He has put those particular sounds together as if they were just occurring to him, again and again, and they still live. He’s an artist.

Being stick-thin and morose, Brennan perhaps naturally keeps to a subdued range as a performer. He does well with small, accurate renditions of miniature moments: he’ll get the head tilt of a reluctant hero facing up to the need to act, or the prissy final consonant of a pantywaist who thinks he’s just made a point. He can play a prison inmate, but it’s a prison inmate who’s biding his time, playing it cool. “I don’t give a fuck, bro,” he says. “I’ll be doing dips until you’re ready,” The dips, as performed by Brennan, are precise but casual: one hand on the prison cot (or comedian’s stool), he hikes the straight line of his body and lowers it into a bend, back and forth as he works those triceps. “All day, bro,” the inmate says. That line’s typical. Brennan does fine things with people’s after-thoughts and tossed-in comments, and most often the people in question are being distinctly dumber than they realize.

The inmate, for example, is a stand-in for testosterone. As Brennan sees it, that means he’s there to make his host body act like a moron. “Testosterone. It’s a creepy hormone,” Brennan says. He comes down squarely for the view that there’s something wrong with being a man. This makes sense, given how he feels about himself. In practice, though, he figures a man who isn’t harassing women or fucking babysitters is doing okay. Whereas women, in his view, are prey to smaller sins but give in to these sins more often. Brennan takes a firm Hollaback line regarding women and public space (“no guy yelling at a girl in the street is ever nice”). But he has a lot to say about his girlfriend’s over-reactions to relationship issues. The upshot is this: a man shouldn’t annoy a woman in the street, and at home he’d better be ready to put up with some silliness and emotion. This view is ancient, I think, and here we find it decked out for the 21st century.

With regards to race, he works the unusual but characteristic gambit of doing black idiom in a flat white voice. “Damn, ma, your titty game is bananas,” he says, but he says it as Bill Gates (to illustrate that successful men don’t hang out looking for women on the street). There’s one moment when he speaks black in a black way, and that’s when he’s telling how his depression made black guys admire him. “Neal, man, you don’t give a fu-u-uck,” says some anonymous groover, speaking out of Brennan’s mouth. And Brennan tells us, “And I wanted to say, ‘Well, that’s because I’m sad.’” He may be the first white comic to peg a joke to a black man being off-base about a matter of cool. More daring is the miniature journey on which he sends “sad.” On that last word, his voice wobbles up a half-inch and quietly deflates. A stage show built around effects this small is a brave enterprise. Brennan makes his work.