What It Means to Watch a Montage Scene, Part 1

The montage itself wields the cuts between shots like a knife. 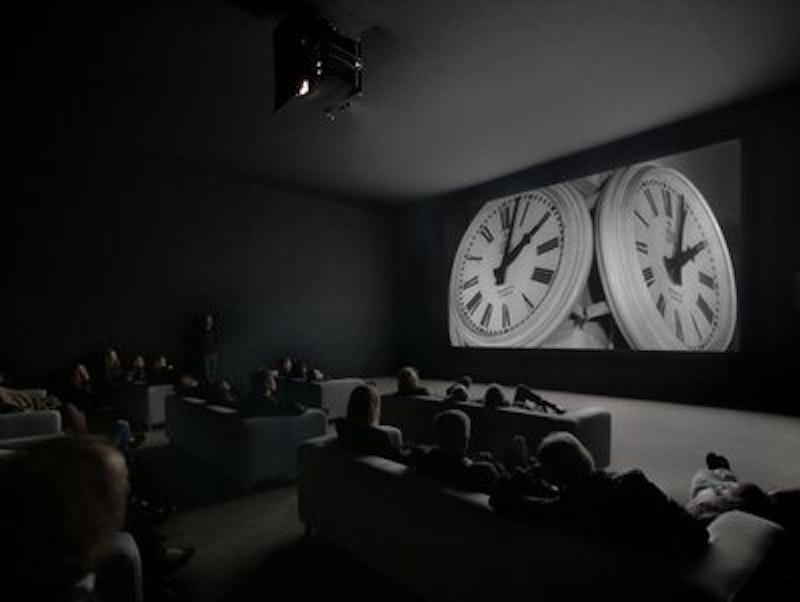 A conceptual artist named Christian Marclay put together a 24-hour movie that features every hour in the day as it appears in the movies. Titled The Clock, his movie almost captures every single minute of the day, if that minute has ever been caught on tape.

It’s arguably the greatest horror film ever made.

Most of the time, when The Clock switches to a new scene, time has advanced a little. The film is synchronized with the actual hour, according to Marclay's instructions, so you know the actual time as you watch. Time is slipping away from you; you devote as many hours as you can stand to watching life ebb, via Marclay's relentless confetti of edited scenes. Eventually, you realize that the heroic scenes in The Clock are those where a given time repeats itself. The big moments do this: for example, it is noon several times, in scenes from various different movies. As long as it stays noon, of course, the time of the film is wrong—it can only be synchronized once. After that, it's cheating a little. You know this and want Marclay to cheat, because for that suspended instant you’re cheating death. The clocks in Marclay's film are villains; what’s missing from every cleverly cut scene is the rest of the movie pushing back against the stroke of another hour.

Where have we seen such suspended hours before? In many places, of course, but notably in every adaptation of Charles Dickens's A Christmas Carol, where Scrooge travels through the past, present, and future in the course of three hours, each of which is magically extended beyond all reckoning. Scrooge's chance for redemption comes as a favor from his dead partner, Jacob Marley, for whom it is already too late. Scrooge's own journey ends, as it must, at his grave... and hanging over the whole adventure is the frightening question of whether it’s too late for him as well: "Are these the shadows of things that must be, or merely the shadows of things that may be?" Scrooge asks the Ghost of Christmas Future, shrinking from the ghastly parade.

The proximity to death in these scenes is the natural complement to Scrooge's journey through the present, where The Ghost of Christmas Present shows him various Christmas evenings, and Scrooge cannot alter them or make himself heard. He’s a ghost, having sacrificed his material form and efficacy for a perfect and simultaneous vision stretching across all London.

The Ghosts of Christmas Present and Christmas Future sprang into Dickens's brain in 1843, when he was 31. In America, Walt Whitman, Dickens' junior by seven years, would write about "the sailors at work in the rigging," that he sees crossing Brooklyn Ferry, along with

...The round masts, the swinging motion of the hulls, the slender serpentine pennants,
The large and small steamers in motion, the pilots in their pilot-houses,
The white wake left by the passage, the quick tremulous whirl of the wheels,
The flags of all nations, the falling of them at sun-set,
The scallop-edged waves in the twilight, the ladled cups, the frolicsome crests

At some point, Whitman's vision extends beyond the realm of possibility, and he’s immersed in a fantasy, taking a journey of his own with the Ghost of Christmas Present to every corner of the American experience. It’s a method he’d use for the rest of his life—and, as it unfurled in free verse, practically his trademark.

Both Dickens and Whitman are clearly writing montage scenes, some 80 years before Sergei Eisenstein would codify "montage" as the Soviet montage theory of film. Eisenstein believed that montage was the essential structure of film: "the collision of independent shots" wherein "each sequential element is perceived not next to the other, but on top of the other." That describes Dickens well: in theory, Scrooge and the Ghost are abroad at two in the morning, but they see people having dinner and opening presents. The visions they traverse must’ve occurred earlier in the night, all at the same time, one on top of the other. Time is dislocated: rewound, played forward, and then rewound again as the next "shot" begins, like a broken watch with its second hand twitching.

Other critics have observed that Eisenstein's method hearkens back to Dickens, but it's never clear why Dickens (and his less theorized contemporary Whitman) should be so prescient, as if reaching out for a medium—film—beyond their era's technological means. Furthermore, it’s strange and interesting that Whitman's patriotism, Eisenstein's Communism, and Dickens' nascent Progressivism should all find expression through this same conceit, these piles of moments.

There are different kinds of montage, and for now I’m only concerned with Eisenstein's version, which cuts sharply from one scene to another, always interrupting action in progress. To understand where this comes from, we have to examine what was already happening to time a century earlier.

Time was gathered together, and split, all at once. In the 18th century, in England and America, the tallest buildings were churches, and their steeples dominated the landscape (as they still do, in some parts of both countries). The Industrial Revolution changed that. In the new landscape of the factory town, the tallest and most visible tower showed the time. It did not toll, like church bells. It rang like a modern alarm clock. Company time was absolute: it was either time to work, or it was time to rest, until one's shift came around again.

Meanwhile, time was also becoming atomized and personal. In 1865, Lewis Carroll's White Rabbit is checking his pocket watch in agony; three years later, the first wristwatch was created and worn. Adjunct to company time—"the" time, as it would come to be known—was one's personal schedule of needs, obligations, and pastimes.

It’s easy to suppose that everyone wearing a wristwatch is on the same time, but that’s only true now, when our clocks are set online. It used to be that everyone was literally on different time, by at least a few seconds and often more. Have you ever tried to synchronize two watches? If so, you've noticed that you have to stop one watch and let the other run, so that you can resume the stopped watch when the ticking one reaches it.

That’s precisely what happens when you watch a movie; you stop your own watch, your own personal time, in order to get in sync with the film. Two hours are cut neatly out of your life, and if you have to use the bathroom, you miss a scene or two. In other words, a montage scene in a film is actually just intensifying, and multiplying, the fundamental process of watching a film, which is the suspension of one's own affairs.

When Eisenstein claimed that the dialectic of film arises through the tension between shots, after those scenes are edited into a sequence, he meant that the stopping and re-winding of time implied by a montage is locked in a struggle with both the authorized time of capital and the atomized schedule of the individual. Out of this struggle emerges a simultaneous awareness of others: the laborers and carolers on Christmas, the pilots and sailors teeming in Brooklyn harbor, the Communist proletariat at work in the factories and fields. When George Bailey is about to commit suicide, in It's A Wonderful Life, he’s granted the vision of a community wrecked by his absence, an invisible tear in its fabric ruining the whole cloth.

In the epiphany montage, now familiar to us from countless songs and films, the piecing together of a life or a town is accomplished through an act of love. That’s what Bob Dylan is calling for in his Whitmanesque song "Chimes of Freedom," and what Lester Burnham achieves at the end of American Beauty. It is, perhaps, an irony not to be borne that this freedom to love always brings death in its train, often arriving like it does for Burnham, or for The Ancient One, in the trackless expanse of subjective time during those final moments of life. The montage itself wields the cuts between shots like a knife. But if it’s too late for them, it’s not too late for us: the eye of the camera, stretching over our cities and between the suspended crystals of the snow, takes us by the hand like a ghost.