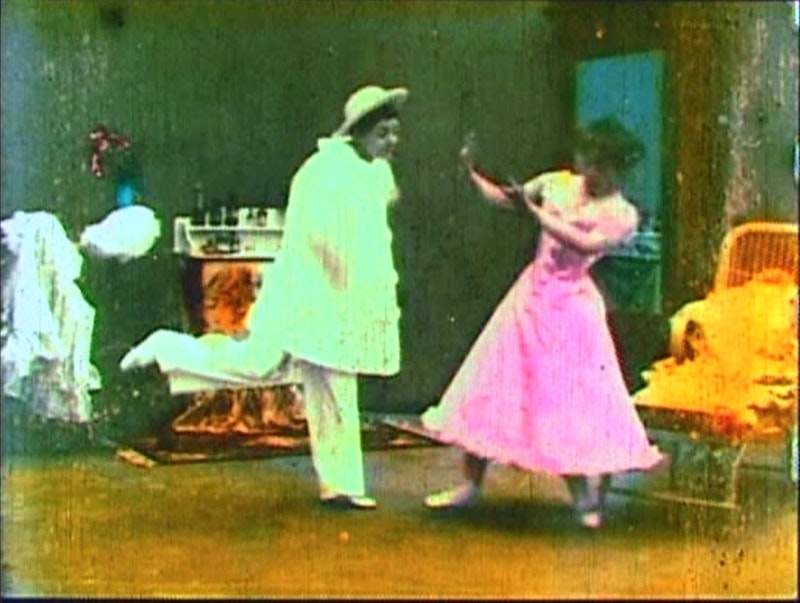 This is the most recent post in a series on women filmmakers. The last, on Yoko Ono’s Bottoms, is here.

Alice Guy-Blaché used to tell her actors, "Be natural." It's advice that rings oddly when you watch her films. Guy-Blaché was the first woman director, and to modern eyes her silent films look stagey and highly artificial. Actors mime broadly as they trot through unlikely scenarios. Women get glued to stairwells, babies are born from cabbages, statues come to life. There's a lot of slapstick and fantasy. It can be surprisingly entertaining, but it's not what you'd call realistic.

The narrative, such as it is, is fantastical too. The woman protagonist is in her own room, dancing for no one, or herself, or the audience, when she’s accosted by an androgynous individual in a hat and oversized white coat, who tries to kiss her. She dodges his advances, and shows him out. Then she twirls about some more, lifting her skirts flirtatiously, until another woman dressed as a man in shining green tights and yellow boots appears. The two of them dance, the green woman's arm around the pink woman's waist, and then delightedly kiss, at which point the film ends.

In "Comparative Sapphism," Sharon Marcus argues that in France in the 1800s lesbianism was associated with the seamy underbelly of life—French novelists showed they were mired in authentic nastiness by exploring taboo topics like drug abuse, violence, and homosexuality. But that's obviously not what's happening here. The flirtations with androgyny and lesbian eroticism aren't presented as dirty, real, or tragic in Guy-Blaché's film. On the contrary, lesbianism here is theatrical, light-hearted, campy fun. It's fluffy diversion.

Who’s fluffily diverted, though? We don't know a lot about the audience or genres of early silent film, and it's difficult to reconstruct exactly what Guy-Blaché thought she was saying, or to whom. We know broadly that Pierrette's Escapades draws the Harlequinade, of the Comedia d'elle arte tradition. Harlequin farces often included cross-dressing and pantomime; women often played young boys, while men played ugly old women. In harlequin performance, the story of Pierrot (here feminized to Pierrette) was about unrequited love, with Pierrot pursuing a woman named Columbine futilely, to evoke either pathos or ridicule.

Another mysterious aspect of the film is the setting. Where’s the film supposed to be taking place? Is Columbine an actress or dancer, waiting in her room backstage? Is she in her own room? The set is framed as an interior; Columbine is in her room, with her own make-up table, and a mirror before which she primps and dances. But you can't see any doors. Columbine's first suitor simply walks on. The second appears in the center of the floor as if by magic; there must be a break in the version of the film extant, so that her exact moment of arrival is lost.

The location of the film is ill-defined because Pierrette's Escapades is not a narrative or a story. The point of the film is simply to show Columbine, an attractive woman, dance, reject one suitor, and embrace a second. There's no development; it's simply spectacle. The film makes little effort to be natural; it has no pretense of realism. As such, it’s arguably more natural than the standard contemporary Hollywood film that presents itself as a window on an ongoing reality. Guy-Blaché's film is open about its artificiality; it’s natural in that it admits it’s not natural. It’s taking place in a place that is not a place, in brilliant colors that are not colors.

This is the pleasure of the film. The short pantomime isn't tied down by any logic, colors or narrative. Natural rules about gender and sexuality are casually shrugged off; people of every gender, or none, watch and admire Columbine. The film frame doesn't take you to a real place. Instead, it’s a magical, flickering vision, in which people and desires appear and disappear.