A Strange Fixation on Someone's Ass

The unbearable load of the 1987 film adaptation of Flowers in the Attic. 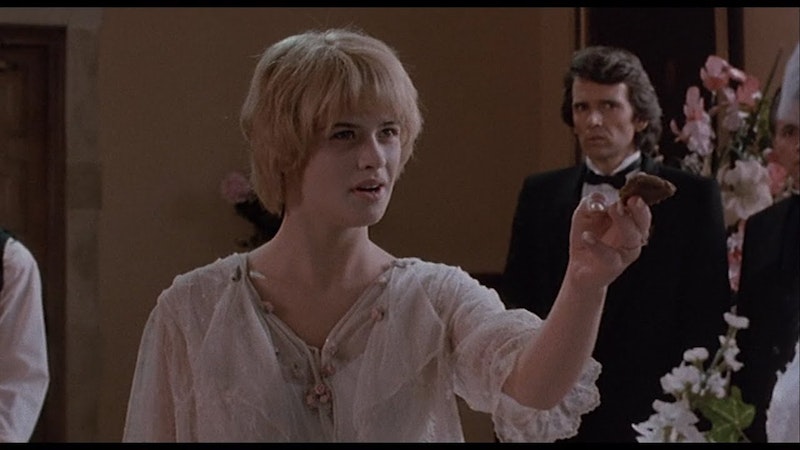 A few points about 1987’s Flowers in the Attic. This film was released eight years after the successful publication of V. C. Andrews’ book. The movie, directed by Jeffrey Bloom, has a made-for-TV feel to it—though it was featured on the big screen, many of Bloom’s other credits are for TV specials. Filmed at the historic Crane Estate in Massachusetts, there’s no shortage of haunting visuals. However, the setting doesn’t redeem the rest of the movie—the performances of the actors, at times, are unbearable. The book provided a solid storyline that wasn’t well-articulated in the film.

A family of six loses their father in an unexplained accident, and their grieving and “penniless” mother (Victoria Tennant) brings the children to her wealthy parents’ home. She claims that she must “win back” her father’s love to be unstricken from his will—he’s dying. She’d been excommunicated from the family because, as it was revealed, she married her uncle. This is the first taste of incest in this movie.

The introduction to the grandmother character (Louise Fletcher), the antagonist, is an awkward crosscut between her and her incestuous daughter. Grandmother’s wearing her ankle-length black dress and an excessive amount of blush and blue eyeshadow. She’s a scary woman, but her tone doesn’t match her frightening physique. The character’s cold and hateful, but she’s not nearly as terrifying as she could (and should) be. Grandmother makes it clear that the kids are to be hidden away in her home, not to be seen by her dying husband (he doesn’t know they exist). “No child that lives under this roof shall disobey!” says Grandmother flatly, after lifting a child two feet off the floor by her ears.

The children are assigned their beds, and when curiosity overtakes them, they discover the attic. This is their haven away from Grandmother, and the only place in the massive house they’re permitted to explore. The kids are Christopher (14), Cathy (12), and Carrie and Cory the twins (five). These are their supposed ages according to the book. The actors were significantly older, with Jeb Stuart Adams as Christopher 26 at the time and Kristy Swanson as Cathy 18. When Cathy is grieving her father, she cries out “Nobody told us that daddies die too, even if they’re young, and handsome and kind!” Her mature look paired with the words of a 12-year-old is a laughable juxtaposition. It gets even weirder in a bathtub scene where Christopher is scrubbing Cathy’s back. If the actors were young kids, it might be endearing.

The director has a strange fixation on Christopher’s ass. I lost count of the low angle shots of his butt in those Levi’s. A dramatic scene of him and Cathy trying to escape via the roof is 90 percent focused on Christopher’s ass. The film’s soundtrack adds to the chaos, with composer Christopher Young (Sinister, Ghost Rider, The Grudge) serving some synthesizer spooks. Much of the music includes ghastly children’s choir voices, that are essentially a soprano version of the Halo video game theme, an echoing Gregorian chant.

As the movie goes on, visits from mother and food rations from Grandmother are more infrequent. The children become malnourished and begin looking like the Cullen clan from Twilight. We learn that mother is putting her life of luxury above the needs of her children and is newly engaged. One morning, the children awake to find cookies have been delivered to their room. Cory eats them and later becomes very ill. Eldest sibling Christopher suspects arsenic poisoning. Enraged, Cathy devises a plan to crash her mother’s wedding. She brings one of the poisoned cookies. After a prolonged fight/struggle sequence between her and her mother, with Cathy shouting “EAT THE COOKIE!”, this movie comes to an end. Mercifully.