Every Single Episode of Wife Swap

In case you aren’t watching it. 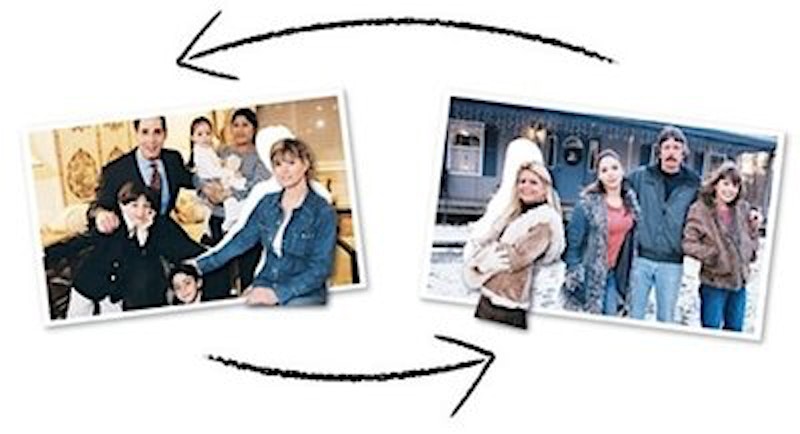 I never watch TV while it’s on “live.” The only exception: The Walking Dead, which I see in real time on Sunday nights. I love to watch whole seasons of things on Netflix or Amazon Prime. Recent full-season binges include Game of Thrones, House of Cards, American Horror Story, and soon I’ll be diving in to Orange is the New Black. (Everyone keeps telling me Sons of Anarchy, too).

My kids watch random stuff, most of it annoying. I stopped complaining about hearing the theme song of Spongebob Squarepants when I realized that as my kids get older, they’re watching far more wretched shows. My top choice for the worst thing they like is Wife Swap, which is on at a time of day when I’m making dinner so I end up hearing it in the next room and admit to being sucked in to watch for a few minutes here and there.

This is a (far-from) “reality” show wherein the wife from each of two couples switches places with the other family for a few days. As in, the mom goes to another family’s house while the mom from that house comes to hers. Needless to say, it’s creepy that they now have new husbands they’ve never met, and the show never really gets into the sleeping arrangements. In case you don’t watch the show and don’t ever plan to, here’s what the script of every single episode looks like; because they are all the same.

Introduce the two families, pointing out five or so major differences between them. Overemphasize the fact that they are polar opposites because one is really strict/conservative and the other is hippie/liberal.

Show everyone saying goodbye to everyone. The kids look sad. The dads look hesitant and concerned. The moms look hopeful, nervous, determined.

Cut to moms checking out their new surroundings in a slightly judgmental manner, making a comment under their breath that insults the new environment. Scene: between kids and their new mothers illustrating completely different parenting styles.

Zoom in on conservative dad expressing immediate frowned concern about new hippie mom coming in here and not feeling like making his dinner or some such other sexist, 1950s-type commentary. Cut to hippie mom in another room expressing her sorrow for the poor mom who has to live here and deal with these outdated gender stereotypes.

Scene: mall: hippie-raised teen at store choosing prom dress with conservative mom who is hemming and hawing and rolling her eyes at the camera and muttering about how she would never let her own daughter wear this.

Tension builds as defensive, chest-beating Mad Men husbands argue with new wives over house rules. There is crying. Find one of the moms and ask her if she misses her kids, show her the framed picture of them she brought in her suitcase. Close-up: crying.

Cut to one of the spouses threatening to leave because they cannot deal with the morals and values of the swapped spouse, especially the overgeneralized gender stereotypical breakdown of chores, roles and responsibilities in the household.

Show someone trying to do better or compromise on something if they want the goddamn paycheck for this shit.

Zoom in on kid doing homework who has learned important lessons about how to do things differently. Show fathers agreeing that swapped wives really do have a point about that one thing. Scene: kids returning happily to mothers who are happy to return home to houses where lessons have all been shared and learned.