Let's Go for a Ride

Gravity is as emotionally and intellectually engaging as an amusement park ride. 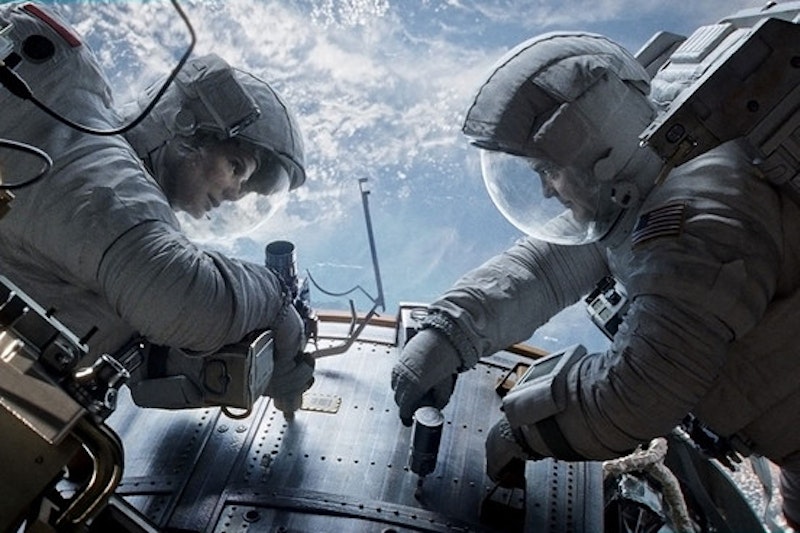 You should see Gravity, but it’s not “the film of the decade.” Lots of what you’ve heard is true: it’s visually arresting, technologically seamless, and more engaging than anything else out now. But for all its exemplary CGI, at its core Gravity is another odious series of action movie set pieces punctuated by the most tepid and boring Hollywood dialogue imaginable, delivered by eminent non-actor George Clooney, who could’ve fulfilled his obligations over Skype, or just through splicing together bits of talk from Solaris or Syriana. Clooney refuses to make any effort to be anybody but George Clooney, in space, casting clunkers left, right, up, and down, sucking the fun out of a movie that feels more like an amusement park ride than, as David Denby said, “a film of ideas.” Writing for The New Yorker, he goes on to give it a blowjob despite its lack of substance and total existential indifference. Comparing it to 2001, he calls Gravity “an overwhelming physical experience—a challenge to the senses that engages every kind of dread.” Dude is still scared of shrapnel and chopsticks flying at him in 3D.

The movie, at 90 minutes, is bloated and usually boring, in between hairy space walks, tumbles, tussles, and full spins where Sandra Bullock waddles and revolves as we hear her whine weakly, like an uncomfortable and distressed person on a slow-moving haunted house ride. There’s no need to knock any of the visuals though, they’re flawless, and that’s what makes the nakedly contrived parts of this movie more annoying and disappointing. I might be remembering incorrectly, but I believe the first 45 minutes is a single unbroken take, animated and constructed over months instead of in real time, but the look of this movie is truly a leap forward and it shows that movies won’t remain stagnant or get stuck in a rut of dead, exhausted emotions, premises, and outcomes. Gravity is not a great leap forward, but something great seems at possible now.

We all know Sandra Bullock will survive her perilous and traumatizing un-hooking in space. We shouldn’t be surprised when Clooney dies to save her, his tone remaining unwavering and emotionally vacant, the same timbre you’d hear in a six-hour press junket interview. I understand astronauts have protocol, but good God, get some unknowns, get someone who can actually act and become a different person than the public domain cartoon character they’ve become. Bullock is far more believable and does what she can with awful lines (“It’s time to stop driving. It’s time to go home”). The clichés are delivered totally deadpan almost to the point of absurdity. Look, I’m not asking for much, because the visual spectacle of Gravity is the point, and what they spent the most time on. The dialogue and the predictable structure of the movie leave it in stasis between a tease of a glorious future and the vestigial Hollywoodisms that litter almost everything out there.