As Indie Film Hangs Go, Enough Said Is a Doozy

Too bad it's almost impossible to find it in a theater. 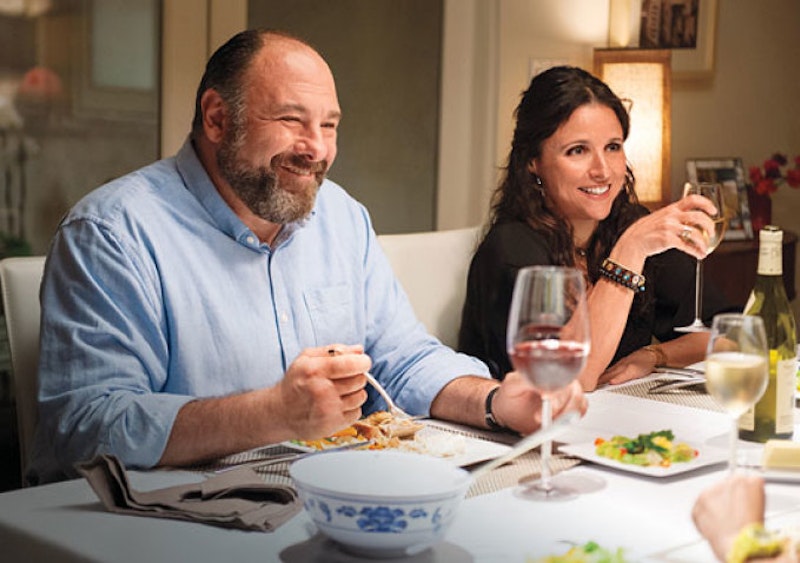 The thing that pisses me off most about Enough Said has nothing to do, intrinsically, with the film itself, but the reactionary nature of culture and commerce when it comes to Hollywood products geared to audiences over 35. Let me put it this way: last Sunday, I caught a matinee screening of Enough Said at Baltimore’s Charles Theater with my dad and a deeply amused crowd of maybe 40 attendees who all seemed old enough to be my parents or at least older siblings, mostly because there was no fucking way to see it anywhere else. (Frankly, if the reviews weren't uniformly glowing, Enough Said would already have vanished from cinemas altogether.)

If I'd wanted to see it anywhere in the vicinity of Lewisburg, PA, where I live, I'd have had to drive at least an hour; as it was, I had to travel 30-40 minutes from my mother's house to The Charles, whereas if I'd seriously wanted to make time with Bad Grandpa, The Fifth Estate, or, I don't know, Gravity—and there's no way I ever wanna see that—I could've driven a few miles in any direction and returned sated. It's analogous, almost, to my recent, black comedic struggles to get hold of a physical New York Times after 10 a.m.: no dice, and you'd better pray your 10 IP address reviews per month aren't up if there's something you need to see right away.

Enough Said is quietly incisive enough that the aforementioned are mere quibbles in the grand scheme of things, a potential Monsters of Television Come Together To Rock A Feature Film circumstance staged as something penetrating and powerful. By now, you probably know the gist: Albert (an understated James Gandolfini) and Marianne (an unrecognizably bronzed Catherine Keener, teeth sheathed) are divorced, and, independently, gets to know a masseuse named Eva (a game, feisty Julia Louis-Dreyfus). Unaware of the nature of the relationship between the first two, Eva falls in love with Albert, and becomes semi-besties with Marianne—a situation which gradually becomes awkward for Eva as her awareness dawns, until it becomes lip-bitingly uncomfortable for everybody in the movie and everybody in the audience, watching through their fingers. So there's the dominant theme everything hinges on—and, really, how fundamentally sitcom is that, right?—but the pleasures here lie in the narrative design, overall ambiance, and social etiquette on offer.

There's an excessive, cheery politeness between these upper-middle class Californians that's at first cutely quaint, then downright smothering; writer/director Nicole Holofcener spikes this good humor and bucolic backdrops with chestnuts just slightly less withering than what one would expect from Todd Solondz. This is the kind of movie where no character or plot line is wasted, where it feels like you're spending 90 minutes hanging out with real people and their high school-aged kids at their ranch homes or while they're sleep-walking through jobs you can't imagine possibly paying all of their bills, but somehow are. From Albert and Marianne's fashionista bitch daughter to Eva's Martha Plimpton-lookalike spawn to Eva's nutty shrink Australian gal pal (Toni Collette), no one is superfluous or one-note, and each character's involvement ultimately adds to the film's arc.

In some ways, Louis-Dreyfus's Eva feels like an extension of her beloved Seinfeld character, down to the exhaustively expressive facial calisthenics and broad physical comedy; she somehow is able to make us share the extremity of everything that's happening to her. There is a recurring gag where she must schlep a heavy massage table up 25 or 30 steps to service a client who never deigns to assist her, and scenes where Eva plies her trade as the pieces of clay she molds projectile-vomit inane monologues accrue as a sort of oppressive logjam of meaninglessness.

But where Seinfeld's Elaine was caustic and defiantly anti-social, Enough Said's Eva is desperately eager to please and innately passive; there's a sub-plot where she effectively becomes a surrogate mother to her daughter's friend without quite seeming to realize that it's happening, even as the audience does. James Gandolfini, for his part, plays Albert with the simmering, guarded calculation who's still licking wounds from a horrible, doomed marriage and is bound and determined to avoid making the same mistake twice; he communicates less with words than with his bodies. By Enough Said's final scene, as hope bubbles up in everyone's throats, and our protagonists regard one another with a diminishing wariness, something in the air has shifted, and settled.