Enough Said Is Without Peer

Nicole Holofcener’s newest film is the best romantic comedy of the last 20 years. 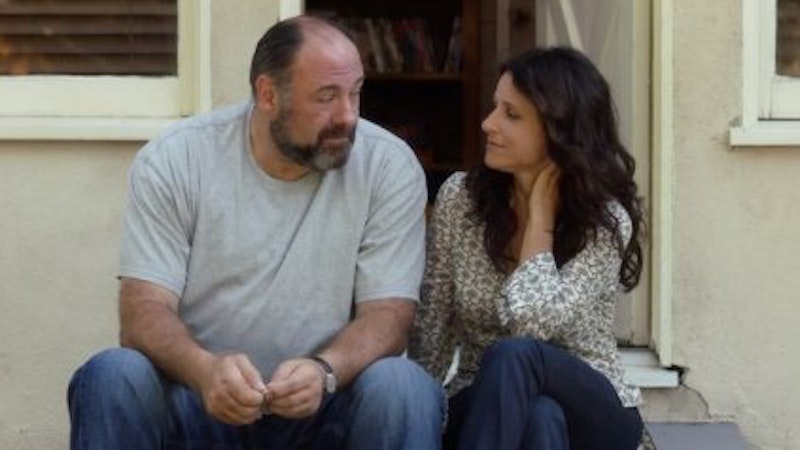 Most romantic comedies are low cost/low effort and not taken very seriously. Recently there’ve been a few “rom com” movie nights here in Baltimore, with Overboard, Failure to Launch, and Friends with Benefits shown. Whether you’re enjoying the movie on its own terms or for how contrived and plastic and full of clunky stock dialogue it is, you’re enjoying it all the same. This “liking something ironically” business makes no sense. You either enjoy or appreciate something or you don’t, you can’t qualify your love of How to Lose a Guy in 10 Days or Must Love Dogs with something like “Oh, I don’t really enjoy it, just how bad it is.” So bad it’s good is just good. The Room isn’t bad-good, it’s just good, incredible. Just because a movie succeeds against its own intentions, it’s still a success, without an asterisk. My favorite romantic comedy is Little Nicky, for it’s Adam Sandler’s most bizarre and creepy leading role, and his courtship with the bookish Valerie is really quite sweet. But that movie wasn’t trying to be a straight rom com. Nicole Holofcener’s Enough Said is vivid, honest, and simple, and gives meaning back to the formula.

Sadly, this is one of James Gandolfini’s last roles, but despite some unintentionally spooky stuff about his character eating too much guacamole and getting a calorie book, I was sucked into the movie’s refreshingly true-to-life dialogue. Julia Louis-Dreyfus is the most likable American actress working today. Even on the whirlwind show Veep, where she plays the Vice President, Louis-Dreyfus comes off as someone you’d befriend at the gym, or a friend from college you could talk to for hours. Gandolfini says much the same early on, on their first date: “It feels like we’re old friends.” These are very well known actors working within a framework that isn’t exactly radical, but their flirting and conversation hits you in the gut, gives you butterflies, makes you think of people that made you feel this way, feel so excited about life. There’s the requisite slapstick premise: Louis-Dreyfus works as a masseuse for Catherine Keener, who it turns out is Gandolfini’s ex-wife. Of course Louis-Dreyfus hears all the awful things Keener had to say about him, and when she pieces it together, their own relationship starts to sour.

Writing about Enough Said now, I’m not struck by any surprise deaths (my dad bizarrely suggested Louis-Dreyfus might kill herself after their acrimonious breakup), or any startling innovation in the formula, because it ultimately ends up where most rom coms do. Enough Said is simply a joy to watch and soak in. Holofcener’s ear for dialogue vividly summons up the ecstatic nervous excitement of having a crush, one of the most invigorating feelings in the world, and there is no absolutely no distance between the audience and the production. It hits you, yellow stars forming around your eyes, as you sink into it—it’s obvious that you know these people, you’ve been these people. For once, Hollywood isn’t condescending, patronizing, or treating you like a barn animal. Enough Said is without peer. It’s easily the best romantic comedy of the past 20 years, and an invigorating experience, a movie that makes it so easy to connect and actually feel something for once.